Unity Protests To Free Julian Assange Held All Over The World

More than 20 protests in support of Julian Assange were held around the world on June 18 and 19 calling for freedom for Julian Assange. Assange entered the Ecuadorian Embassy six years ago to avoid extradition to the United States to face an espionage charge. A sealed indictment against Assange has been reported that could result in him spending the rest of his life in prison.

Gateway Pundit reported that the protests brought people together from across the political spectrum. They wrote, “Speakers and activists, ranging from Socialists to Trump supporters, joined together all across the globe for a day of unity in protest of the sixth anniversary of WikiLeaks founder Julian Assange entering the Ecuadorian Embassy in London seeking political asylum.” Cassandra Fairbanks wrote, “Outside the White House, left-wing activists including Code Pink founder Medea Benjamin and  CIA whistleblower Ray McGovern stood alongside Trump-supporters such as Lee Stranahan of Breitbart and Sputnik News, Will Chamberlain who helped build MAGA Meetups, and myself.” 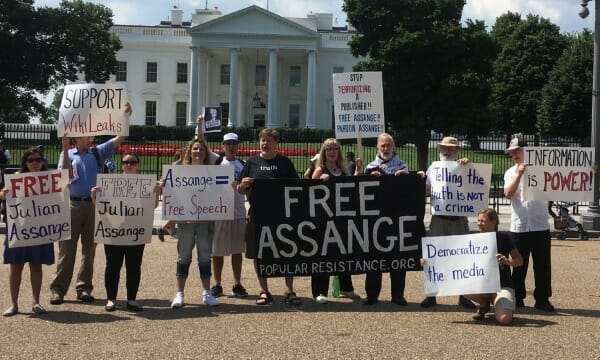 The World Socialist Website reported “Protests were held at a number of cities across the United States yesterday as part of international demonstrations demanding the release of WikiLeaks journalist Julian Assange. June 19 marked six years since Assange was forced to seek refuge in the Ecuadorian embassy in London, where he has remained imprisoned in order to avoid arrest and extradition to the United States.”

Protesters argued that being editor-in-chief of a news outlet is not a crime. WikiLeaks has published numerous documents that show the daily actions of the United States in Iraq and Afghanistan, including war crimes, as well as documents on the operation of the Guantanamo Bay prison. WikiLeaks has published documents on the Trans-Pacific Partnership and numerous countries and transnational corporate interests.

Protesters outside of Ecuador’s embassy in London chanted and held signs calling for Assange’s freedom. Susan Manning, the mother of Chelsea Manning participated in the unity protest for Assange.

John Pilger spoke at a protest in support of Julian Assange in Australia on June 19.

In this address to mark Julian Assange’s six years of confinement in the Ecuadorean embassy in London, John Pilger calls on the Australian Prime Minister, Malcolm Turnbull, to recognise the urgency of decisive diplomatic action and bringing Assange home… https://t.co/teioesvbga pic.twitter.com/D0R70wPUFV

He described the injustice of Assange’s incarceration in the embassy where he is now cut off from Internet communication and personal visits. He also described the character assassination of Assange in order to undermine the credibility of WikiLeaks. Assange who has never published anything false was attacked with lies, Pilger said,

“In 2008, a plan to destroy both WikiLeaks and Assange was laid out in a top secret document dated 8 March 2008. The authors were the Cyber Counter-intelligence Assessments Branch of the US Defence Department. They described in detail how important it was to destroy the “feeling of trust” that is WikiLeaks’ “center of gravity”.

“This would be achieved, they wrote, with threats of “exposure [and] criminal prosecution” and an unrelenting assault on reputation. The aim was to silence and criminalize WikiLeaks and its editor and publisher. It was as if they planned a war on a single human being and on the very principle of freedom of speech.

“Their main weapon would be a personal smear. Their shock troops would be enlisted in the media – those who are meant to keep the record straight and tell us the truth.”

False accusations of rape, which were not even pursued by three Swedish prosecutors who initially examined the case, were pursued by a politicized prosecutor. Assange was never charged in the case but the investigation was enough to hold him with the threat of extradition to the US hanging over his head. That investigation has now been ended without any charges brought against Assange, but he remains trapped in the embassy in London.

Two protests were held in Washington, DC, one at the White House and the other at the British Embassy. Below is former CIA analyst Ray McGovern, CODE PINK’s Medea Benjamin and WSWS reporter Alex Gonzalez speaking at the White House.

Below are tweets and other social media showing the protests.

Assange lawyer: The British government could end his arbitrary detention tomorrow by following the normal process: agreeing not to extradite him to a third state (the US) if he is transferred from the jurisdiction of Ecuador to the jurisdiction of the UK https://t.co/JQmiXm3Ls8

“We are here today to call on the #UK government to guarantee that #JulianAssange won’t be extradited to the #US if he leaves the #Ecuadorian embassy – @HorvatSrecko #ReconnectJulian #FreeAssange #Assange pic.twitter.com/6a2OZPLASy

Many guests have been speaking up in support of @JulianAssange this evening and I have heard much appreciation for the #Ecudorian people and the Embassy for standing up and providing @JulianAssange political asylum for 6 years pic.twitter.com/CF4c4DjADx

A big hello from supporters in #Adelaide #JulianAssange has been smeared and attacked because he dared to tell the #Truth and exercise his #Democratic rights as a #Publisher and #Journalist#auspol #Wikileaks pic.twitter.com/oyukUSgoN9

Telling the truth is not a crime. #FreeAssange now!
Outside the @GOVUK embassy in Washington, DC.
International day of action to support @JulianAssange @MakeAfricaGr8 @raymcgovern @wikileaks @couragefound pic.twitter.com/wEUCaNijja

Julian Assange has been illegally separated from his children for six years because he applied for asylum.https://t.co/0VmWWBkWo4https://t.co/hrPyGrl3Tp