Above photo: Hundreds of protesters marched at the University of Florida near the Phillips Center where white nationalist Richard Spencer was allowed to speak Thursday afternoon, Oct. 19, 2017. Emily Michot emichot@miamiherald.com

When prominent white nationalist Richard Spencer came to the University of Florida on Thursday, incidents of violence were limited because of a $600,000 police presence from across the state. What conflict did occur — pepper spraying, punching, chasing — was largely instigated by anti-fascist protesters.

There were five minor injuries and two arrests — one for a Gainesville man charged with resisting arrest without violence and the other for a media member’s security guard found with a pistol and a knife.

Supporters of the alt-right firebrand were largely outnumbered, as hundreds of protesters flooded the street outside the Phillips Center for the Performing Arts, where Spencer spoke.

Richard Spencer was met with protests and defiant chanting during his speech in at the University of Florida in Gainesville on Oct. 19.

Spencer ended his speech half an hour early because protesters, who made up a majority of the 456 seats filled out of 700, screamed and chanted “F— Spencer” and “Black Lives Matter” throughout his speech. At one point, the protesters started a Gator football chant, alternatively yelling “orange” and “blue.” 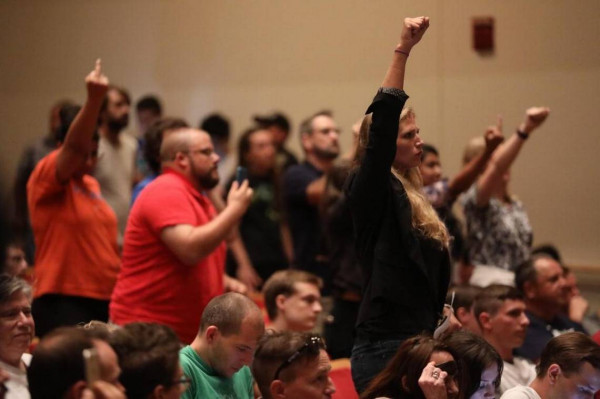 Persons in the crowd react to white nationalist Richard Spencer, who spoke Thursday, Oct. 19, 2017, at the Phillips Center at the University of Florida in Gainesville. Andrea Cornejo For the Miami Herald

Following the event, an argument at a CVS parking lot near campus resulted in a single shot being fired at pedestrians at a bus stop, though it did not hit its target. Although the details remain unclear, witnesses told police “an average looking white male” exited a vehicle, shot at the group and fled. Gainesville police investigators do not know if the shooting was related to Thursday’s events.

There was a clear tension between those who wanted to fight hate with love and those who thought violence was the answer.

For Trae Taylor, a 19-year-old Santa Fe College freshman, a confrontation with an alt-right supporter nearly escalated to violence. But he restrained himself, and simply asked, “Why do you hate us?”

“[Violence] shouldn’t become an answer, but it seems to become a response people come to,” said Taylor, who is half-black. “No one needs to be hated, unless they’re someone who preaches hate.

Jaime Bell, a 27-year-old UF alumna, said Gainesville successfully stood up to racism and hate. When Spencer talked, she and scores of others stood with fists clenched and shouted him down.

“I think today was a win for people who believe in peace and unity,” the UF alumna said.

A last-minute change meant the National Policy Institute handed out tickets to Spencer’s event at the entrance to the Phillips Center, after attendees passed through a crush of protesters and a gauntlet of police officers. Officers confiscated signs and turned people with cameras away. At least two people were blocked from entering because of their canes.

Seth Smith, a Gainesville veteran who uses a cane because of an injury in Iraq and was wearing a Black Lives Matter pin, said police turned him away as a result of his cane. Then Eli Mosley, head of the white nationalist group, Identity Evropa, said “push him out. Get him out of here.”

Others were turned away because of the slogans on their shirts or the phone numbers written on their arms, a common tactic by protesters who expect to be arrested.

At least one would-be attendee was forcibly removed by Florida Highway Patrol troopers, who were helping to provide security. Samantha Schuyler, a former UF student, said she wasn’t given a reason when officers told her to leave.

“I think it’s racism. It’s arbitrary,” she said. “They told me to leave. Then they dragged me.” 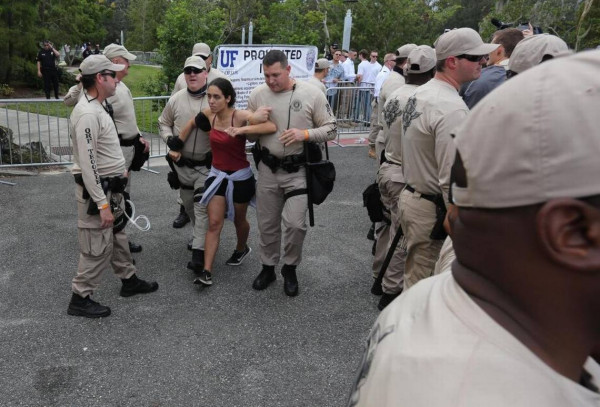 Former UF student, Samantha Schuyler, is dragged away by FHP troopers after being denied entrance to the Phillips Center at the University of Florida in Gainesville on Thursday, Oct. 19, 2017. White nationalist Richard Spencer spoke there on Thursday, drawing more protesters than supporters.Emily Michot emichot@miamiherald.com

As a private group not under the purview of the University of Florida, the National Policy Institute was allowed to choose whom they allowed to enter.

Inside the venue, impassioned chanting drowned out Spencer’s pleas for dialogue.

While UF allowed Spencer to speak on campus, at least 100 UF students and enemies of the prominent firebrand attempted a so-called “heckler’s veto.”

“Go home, Spencer!” protesters yelled, as scores of their peers marched outside the venue. “What are you still doing here?”

Supporters of Spencer responded: “You will not replace us!”

But Spencer persisted with his message of white nationalism and the importance of free speech, no matter how offensive. Earlier, he had thanked UF President Kent Fuchs for allowing him to speak on campus despite outrage from many in the student body and the community.

Fuchs responded via Twitter, condemning Spencer and calling him a racist.

“For the record, I don’t stand behind racist Richard Spencer,” he said. “I stand with those who reject and condemn Spencer’s vile and despicable message.” 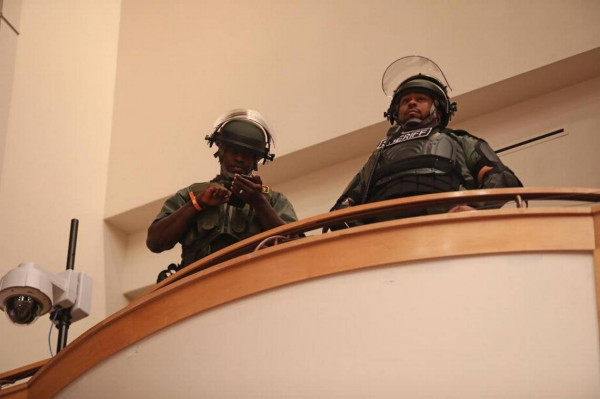 Two Polk County sheriff’s deputies stand in riot gear in the balcony of the Phillips Center at the University of Florida in Gainesville. White Nationalist Richard Spencer spoke there on Thursday, Oct. 19, 2017, drawing supporters and protesters. Andrea Cornejo For the Miami Herald

From a balcony overlooking the Phillips Center crowd, a handful of police officers in riot gear stood at attention. Spencer condemned the crowd for being so hostile.

At least two individuals were escorted out of the venue for undisclosed reasons. One of them, Randy Reddell, who promised to “cause a ruckus,” confronted a Spencer supporter in the row behind him. The two briefly exchanged words, and the man tore up Reddell’s sign.

But the resistance outnumbered the supporters, and soon enough, Spencer’s scheduled two-hour discussion regressed into an extended shouting match between Spencer, his allies and protesters.

Spencer, although appearing frustrated at times, remained relatively calm. He spoke the praises of his “alt-right” movement, one he vowed would overtake the world.

Spit flies at man dressed with swastika t-shirt in Gainesville

A man wearing a shirt with various swastikas is spat on outside of a venue at the University of Florida in Gainesville on Thursday, Oct. 19, 2017, while white nationalist Richard Spencer gave a speech.

He ended the event 30 minutes early, concluding his talk by berating protesters, calling them “failures.”

Outside, the few Spencer supporters who did show up were promptly surrounded and shouted down by protesters. One man was punched in the face. Another was pepper-sprayed in the eye. Still others were chased to the police barricades, where they begged for protection from police. One man who jumped a fence to avoid the crowd chanting “Nazi scum” was led away in handcuffs.

While Spencer spoke, a lone man with swastikas hand-drawn on his shirt in red marker made his way into the crowd of counter-protesters, where he was soon surrounded. At one point, the swastika man and a Black Lives Matter supporter he was talking to hugged each other. Others spat on him.

Man with swastikas on his shirt and black man arguing heatedly in big crowd of #spenceratUF then they hugged. pic.twitter.com/3CT3O4wmQ0

Farther from the center, a few members of the crowd encouraged people to punch him. “”No one will know it’s you,” one male protester in a gray hoodie said.

“No!” one protester yelled. “Don’t do that, please. It’ll go against everything we’re here standing up for.”

Suddenly, the crowd surged forward and the man was lifted up and shoved away from the person he was talking to. The crowd marched, occasionally brushing up against troopers who screamed, “Get back!” and brandished clubs. At some point, someone punched the man in the face.

The crowd walked the man and his conversation partner to a police road barricade of heavy machinery. The cops pulled the swastika man, who was bleeding from the mouth, and another black man he was speaking to behind the barriers.

“Round two,” one protester called out.

The next target, a man holding a “Founding Fathers = Alt Right” sign, was accused of making a “lynching gesture.” While the majority of the crowd sang at him, someone ripped his sign apart.

Protesters allege guy in white shirt made a lynching gesture. Crowd songs “ain’t gonna let nobody turn me around” at him. #spencerAtUF pic.twitter.com/ucKDWllnDQ

People started to chase the man, who tried to jump over a barricade and into police protection. The cops stopped him.

In front of the police officers, a protester blurted, “He’s got a weapon.”

Officers immediately detained the man and searched his pockets. One officer pulled out something unidentifiable and said, “You’ve got to be kidding me.”

Police led the man away. 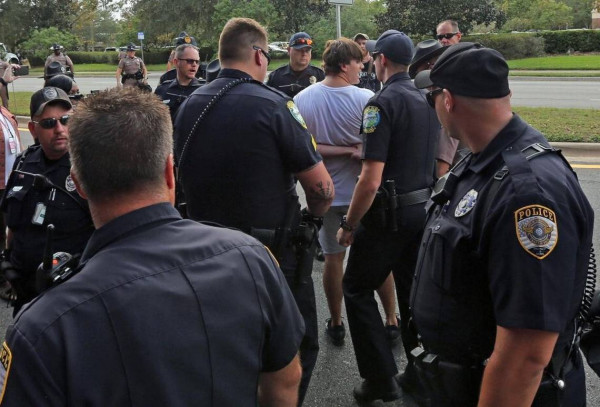 An alt-right demonstrator who held a sign that read “Founding fathers=alt-right’’ was detained by police after he was said to have brandished a weapon during Thursday’s protest on the campus of the University of Florida. White nationalist Richard Spencer spoke at the campus, drawing more protesters than supporters. Emily Michot emichot@miamiherald.com

At the end of the day, protesters said they felt their message was heard and pro-Spencer demonstrators said they gained a valuable platform.

Cynthia Yanez, a Cuban Muslim woman who grew up in Miami, said she was proud of the city where she went to college and got a job as a social worker.

“I think his agenda was to incite violence in such a liberal community so he can point his finger and say, ‘See? This is why we need separation,’” she said. “That didn’t happen.”

Martin Poirier, a 23-year-old UF alumna and self-proclaimed Spencer supporter, believes his alma mater is a “radicalization engine” that indoctrinates its students into thinking like Communists and anarchists.

“We are tired of the far-left dominating the campus discourse, and the far-right is making ourselves heard immensely by this event,” said Poirier, adding he still lives in Gainesville.

Cameron Padgett, the 29-year-old who books Spencer’s university events, said he sees the event as something to learn from. He’s booked Spencer at several universities in the coming months, including the University of Michigan and the University of North Carolina.

Spencer remained steadfast that his appearance was a success, and that his movement would continue to grow.

“You think that you shut me down. Well you didn’t. You failed at your own game,” he said toward the end of his appearance. “The world is going to have a very different impression of the University of Florida. The world is not gonna be proud of you.”