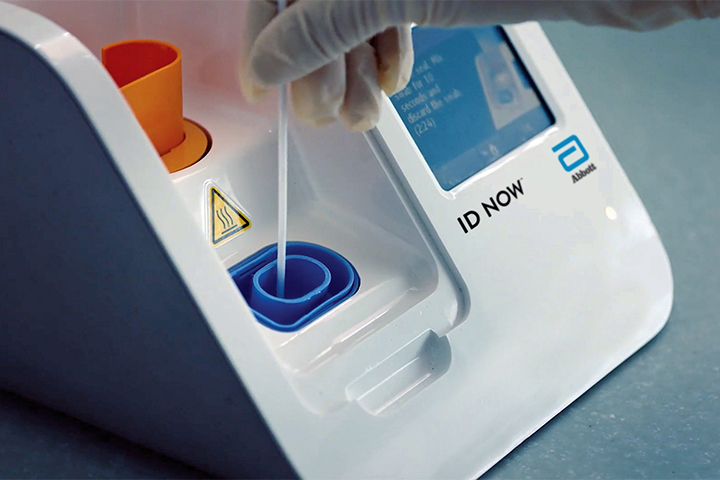 Universal SARS-CoV-2 Testing Is The Answer To Social Distancing

In the absence of comprehensive testing — politicians are gambling with the public’s health.

SARS-CoV-2 spreads rapidly, and much of the spread is related to the transmission of the virus during an early asymptomatic phase. What measures should be taken to minimize infection?

Some would suggest that no measures should be taken. They may seek to expose as many people to SARS-CoV-2 as possible so that communities develop herd immunity. This concept is built on two critical assumptions. First, the vast majority of people will survive the infection unharmed. Second, surviving COVID-19 provides meaningful and durable immunity.

Neither of these assumptions is likely to be correct.

COVID-19 is a devastating disease for many people. Many who appear initially to have a mild illness deteriorate rapidly and die for poorly understood reasons. The virus and the body’s response to it is capable of wreaking havoc on vital organs. It is not simply a nasty form of pneumonia. It can cause serious heart injury and peculiar systemic thrombotic events, which are often deadly.

Elderly patients are particularly susceptible, but many younger people have developed severe illnesses and died. Some of the most serious thrombotic events have been reported in young or middle-aged adults. And some children are developing a severe systemic inflammatory response that resembles Kawasaki disease.

Many who survive may sustain a permanent injury to vital organs. Some may develop permanent scarring of the lungs, in part related to inflammation and in part related (perhaps) to ventilator-induced barotrauma. We have insufficient information to know the long-lasting effects of the infection in COVID-19 survivors. Even those without permanent injury often suffer disabling symptoms that can last for 2-6 months.

No one can be confident that intentional exposure to SARS-CoV-2 will yield a short-lived illness with mild symptoms and without sequelae. For those with persistent or progressive disease, there is no treatment that has been shown to meaningfully change the natural history of the infection or reduce organ injury or mortality.

Furthermore, no one knows if those who have been infected with SARS-CoV-2 have immunity. The antibody tests are still in their infancy, and no one can be certain that circulating blood antibodies are protective. Patients who have clinically recovered can test positive again, either because of reinfection or reactivation or because the interval negative test was erroneous. An early vaccine prototype yielded neutralizing antibodies in a tiny number of patients, according to its developer, but whether clinically meaningful protection can be achieved in most of the population is not known.

These enormous uncertainties lead to one unmistakable conclusion. Those who are encouraging community-wide exposure with the intent of achieving “herd immunity” are pursuing an elusive and risky goal without any assurance of success, but with the certainty that many will die and countless others will suffer.

Given the level of our knowledge, the current stage of the pandemic, and the lack of effective treatment, the only rational approach to public and individual health is to minimize the number of people who become infected.

There are two ways of minimizing the spread of a highly infectious disease in populations of susceptible people.

The first way. People can avoid all contact with other humans or with anything that humans have recently touched. This is what social distancing attempts to approximate. If the government mandates a lockdown and people are confined to their homes, it makes it more difficult for the virus to spread. It is a draconian and imperfect measure; alas, people who purportedly stay at home still become infected and seriously ill, and community-based lockdowns have meaningful social, psychological, physical, and economic consequences. Lockdowns are intended to be temporary; they are imposed until more effective and less draconian measures can be implemented.

To complicate matters further, the concept of social distancing is vague and difficult to enforce. Although the public has been told that the goal is to maintain a magical distance between people of 6 feet, there is no decisive threshold, and the critical distance is highly context-dependent. The threshold distance may be less than 6 feet if people are outdoors. But it is likely to be much greater than 6 feet if people are indoors and speaking in loud voices. Singing in a choir in a confined room seems to be particularly risky. And I would be particularly wary of those who are shouting in crowds, even if it is outdoors.

Some suggest that social distancing can be relaxed if people were to wear personal protective equipment. Although this may be true, I am not certain that currently utilized nonmedical cloth face masks provide an effective deterrent to the transmission of respiratory droplets, particularly if they are used inconsistently. Those fortunate enough to have N95 respirators are likely to be meaningfully protected when they are in close contact with COVID-19-positive hospitalized patients. But cloth face masks impede only 2% of the incoming airflow, making it very unlikely that their widespread use will prevent airborne infections and allow society to return to normal. The wearing of porous face masks may serve primarily as a nonverbal cue to others that the wearer is serious about social distancing.

The second way. Conceivably, we could avoid universal social distancing altogether if we could determine with reliability exactly whom we should be steering clear of. There is no need to avoid people who are not infected, and every reason to avoid people who are infected. Social distancing is a policy predicated on the inability to distinguish between infected and uninfected people since social distancing assumes that everyone is (or might be) infected. But suppose we actually knew who was infected or not. Then those who were or might be infected could be quarantined until they were healthy and could no longer infect others.

The identification and quarantine of infected individuals is an established and highly effective public health measure that is known to minimize the transmission of highly contagious infectious diseases. The concept is centuries old. The word “quarantine” comes from the Venetian word quarantena, meaning “forty days,” designating the period of isolation for all ships before passengers and crew could go ashore during the Black Death pandemic in the 14th century.

Countries that have succeeded in containing the spread of COVID-19 have implemented nearly universal testing coupled with quarantine. Nearly everyone who wants to be tested in South Korea is tested. Iceland has tested a greater proportion of its population than anyone else, and selective quarantine has minimized the spread of the infection without social distancing mandates. Whether true or not, Iceland has been referred to as the “perfect coronavirus refuge.”

Most remarkably, on May 15, following a new outbreak, China announced that it will test 11 million people in the city of Wuhan in a matter of 10 days. That means performing 1 million tests a day. I do not know if such a goal is possible, but even if it is approximated, it will illustrate what can be done if the political will exists.

Until there is an effective vaccine or a truly useful treatment that halts the disease process, universal testing of virus positivity (not antibody positivity) and the isolation of infected individuals and their contacts is the only path forward.

To make universal testing an effective strategy, the results of the tests must be made available quickly. There are doubts about the reliability of the ultra-rapid test that is currently being marketed by Abbott. However, tests that produce actionable results within an hour have been developed, although they are not universally available in the U.S.

The U.S. has squandered its most important opportunity. Much of the nation implemented lockdowns or “stay-at-home” orders, which slowed the spread of the virus but had important social and economic consequences. The implementation of the lockdowns made perfect sense as an emergency measure, and it undoubtedly saved lives. However, the whole idea of imposing a lockdown is to buy time until the infrastructure for universal testing and the quarantine of infected people and their contacts can be implemented. This has simply not happened.

As far as I know, there is no realistic possibility that the U.S. can implement universal testing, contact tracing, and selective isolation of high-risk individuals in the foreseeable future. And in the absence of a system of universal testing and selective quarantine, the relaxing of lockdown measures represents an enormous gamble.

Will it succeed? It might. It is possible that the rates of COVID-19 and its accompanying morbidity and mortality will subside as lockdown measures are relaxed. This might occur because of seasonal changes in transmission rates or because of mutation of the virus to a less virulent form. But one thing is certain: it will not occur because of wishful thinking.

Effective public health policy depends on a reasoned process that is formulated based on what we know about the transmission and biology of the virus. It should be driven by sound principles, which can succeed if we have universal testing with reliable methods followed by the identification and isolation of cases and their contacts. Other countries have shown that they can accomplish these goals. It is astonishing that the U.S. has not moved forward with implementing this policy.

No physician or politician should feel comfortable breaking with the procedures that have effectively limited the devastation caused by previous pandemics throughout history. Failure to implement these procedures means that we have not taken advantage of the opportunities that the lockdowns could have afforded us.

Although current policy decisions might work, they depend on assumptions about COVID-19 that no politician can make with any degree of confidence. No one is wise enough to gamble with public health. Our collective health should not depend on the presumption that we will be lucky.