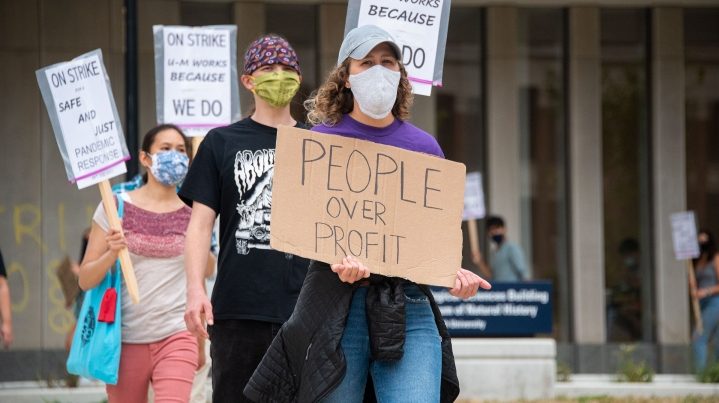 The bottom line is our health can’t wait. Our communities can’t wait. The University’s inaction in the face of  ResStaff’s explicit concerns and action items over the last few weeks has made it clear that public health is not the priority. The University has repeatedly referred to the Wolverine Culture of Care, but has not extended this same care to us. If U of M administrators do not want to live up to the Michigan Difference, we will be the difference ourselves. Health comes first. ResStaff will not stand for anything less than policies and adequate resources that reflect this priority.

As of Tuesday 9/8/2020 at 9pm, University of Michigan ResStaff have decided to strike on the basis of these demands:

This was not an easy or hastily-made decision. We recognize the impact that a ResStaff strike will have on our residents, and it was our biggest reason for not striking during move-in. However, we have reached a breaking point. Our communication with upper-level Housing has slowed to a near halt, after two inefficient and ineffective town halls and the promise of a third which has not come. We have tried the official methods that we have access to, but it is clear that Housing is not engaging with us in good faith and has given us all that they are willing to give. It is only by leveraging our power and our unity that we can make the dorms and this campus a safer place for students and staff.

Since arriving on campus, ResStaff have been shocked and dismayed by the ineptitude displayed by the University in many areas of housing and student life.

ResStaff Move In: During ResStaff move in, starting August 12th, blue bins were not sanitized and there weren’t cleaning materials available to all ResStaff. Many ResStaff members moved into dorms where their bathrooms had not been cleaned since resident move-out in the spring, and whose bathrooms were not cleaned until resident move-in started two weeks later. ResStaff testing was also inconsistent across dorms. Some ResStaff did not get tested, and the vast majority of ResStaff that did get tested were only provided the opportunity to do so after they’d already moved in. The University was unprepared to test ResStaff and did not monitor test results from ResStaff during or after move in.

Pre-arrival COVID Testing: One of the main things the University provided as proof that they were prepared for this semester was the fact that every resident was to receive a COVID-19 test before they moved in. They were told they would be unable to move in without a negative test result. When resident move-in began on August 24th, residents were told to bring this negative test result with them with the understanding that it would be checked at move-in. ResStaff wasn’t told that residents were asked to do this, and had no way to check or log these results. While some residents took initiative and spoke to ResStaff about their test results, the vast majority fell through the cracks. Again, ResStaff received absolutely no guidance about tests in any capacity.

Move-In Policies: Residents were told that they could only have one person help them move in, but the majority of residents had more than one helper, oftentimes including young children or groups of more than five people. There was inconsistent guidance across residence halls on the degree of enforcement for this policy, which did oftentimes result in it going unenforced. There were entire families in the dorms during move in.

Guest Policy: The guest policy during this school year is that residents cannot bring anyone from outside their dorm into said dorm. However, during ResStaff training, University Housing told ResStaff not to enforce this guest policy unless a resident complained about a specific guest situation. After push back from ResStaff on this policy, upper housing employees instructed ResStaff to enforce it, but at the same time, Housing is currently allowing residents to visit any other residents within their resident halls. Housing expects ResStaff to enforce this guest policy, but their inter-dorm policy makes this impossible. ResStaff are not familiar with every face in their respective residence halls. Residents have taken advantage of this to bring guests in from outside dorms.

Maize and Blueprint: To track where COVID-19 is spreading throughout the University, U of M has provided the Maize and Blueprint: https://campusblueprint.umich.edu. The University has said they are updating this website, specifically the COVID-19 Data tab, daily. However, ResStaff across campus know this not to be true. Over the last weekend, ResStaff received reports of residents in their dorms contracting COVID-19. The numbers on the Maize and Blueprint stayed the same. Residents contacted ResStaff and told them they had been moved to isolation or quarantine housing, and yet the numbers on the website continued to stay the same. At this point, ResStaff is unsure if the University is being honest in any capacity in reporting COVID-19 data to their residents.

Masks and PPE: ResStaff have received inconsistent masks and personal protective equipment (PPE) since moving in. When resident move-in began, ResStaff were told they were supposed to clean every blue bin a resident used. At this point, PPE had not been provided to all ResStaff across campus. When ResStaff did receive PPE, it was in the form of the same masks residents received in their COVID kits. During ResStaff training, face coverings were shown to be important primarily through a demonstration of the “flame test”; a video showed us how wearing a face covering would block one from blowing out a simple flame. When the University-provided masks arrived, ResStaff were disappointed to find that they did not pass the flame test. ResStaff did receive some PPE later in the year, including face shields distributed across campus, but the masks in particular remain insufficient.

Social Distancing: Since returning to school, there have also been abysmal conditions across campus regarding social distancing. In larger dining halls, such as South Quad and East Quad, at peak hours, lines sometimes reach outside the building or around several hallways. The University of Michigan has done nothing to enforce social distancing during these times, and when ResStaff has brought this to their attention, we are told we should enforce these lines. This means putting ourselves, the very students that the University wants to “protect,” directly in danger. Social distancing continues to be a problem, and enforcement needs to lie on the University in this area. It is unacceptable to have hundreds of students shoulder-to-shoulder waiting in line for food.

These are only some of the issues we have encountered while working in our ResStaff roles this year. If ResStaff did not return to housing this year, they would lose their jobs and be forced to reapply next year, with no guarantee they would receive a position. While a rehire is never promised to ResStaff members, there is an informal expectation throughout University Housing that ResStaff will be rehired every year, short of any disciplinary or position related issues. As many ResStaff plan their college careers with this expectation of staying ResStaff for the remainder of their time on campus, not returning wasn’t an option for some of us. With returning came issues we expected to see, and even more that we could never have imagined the University would allow to happen. We will not be patronized and pushed around by the University of Michigan anymore. We are the students they promised to keep safe. We are putting our lives on the line for a University that shows us every day how little it cares for us, and we will stand for it no longer.