Lincoln, NE – Administrators at the University of Nebraska-Lincoln (UNL) are facing mounting criticism over their choice to ignore safety issues posed by 23-year-old biochemistry major Dan Kleve. Anti-racists have been calling for Kleve’s expulsion from UNL since last summer, when images of him surfaced after the Unite The Right rally in Charlottesville.

Public pressure on administrators has been building again after the recent release of a video from a Google Hangouts session in which Dan Kleve describes himself as “the most active white nationalist in the Nebraska area” and says “I want to be violent…really violent.” A similar video shows Kleve discussing his desire to murder a black man who asked him about his “pagan tattoos.” Kleve’s former roommate recently told Newsweek that the young man would keep an assault rifle in plain view and discussed wanting to kill black people, including specific individuals.

On Thursday, February 8, UNL chancellor Ronnie Green announced the decision not to expel Kleve from campus. UNL police chief Owen Yardley also said “we don’t believe at this time that there are safety concerns” regarding Kleve.

In the picture below, Kleve can be seen wielding a flashlight as a weapon as he joins other white supremacists in beating a counter-protester. The white polo shirt he is wearing is emblazoned with the emblem of the neo-Nazi group Vanguard America. Kleve has also associated with Atomwaffen, an extremist neo-Nazi terror group tied to numerous murders and bomb plots over the last year.

Messages sent by Kleve over the chat app Discord in the Unite The Right planning server also show his intent to travel to Charlottesville to attack people opposed to his neo-Nazi views. On Friday, August 11, he posted a picture of himself with what appears to be the same flashlight, telling other attendees “make sure to bring a maglite for: “in case it gets dark””. 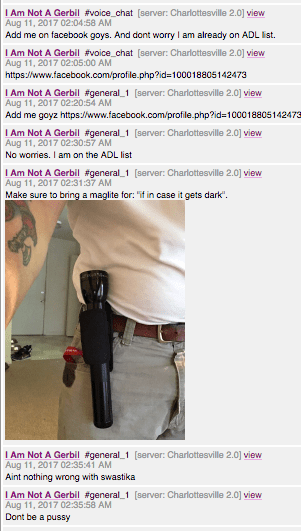 Shortly after Unite The Right, Dan Kleve joined a Discord server called Pony Power and worked to bring together a group who would help him stalk and harass people he thought were responsible for calls to expel him from UNL.

Unicorn Riot obtained the contents of this Discord server during our reporting in the aftermath of Unite The Right, and last September we published an extensive gallery of screenshots showing the chats. This week, we made the data contents of Kleve’s group chat available in online at our public Discord Leaksarchive, along with the ‘Charlottesville 2.0’ server.

The extensive list of people doxed by Kleve and his associates includes a list of suspected ‘antifa members’ as well as liberal activists, elected officials, university employees and ordinary citizens across the country who appear to have been targeted for ‘liking’ Facebook pages with anti-racist messages.

Personal information of doxing targets published in Kleve’s Discord group include names, birthdates, family members, home addresses, employment information, driver’s license and license plate data, and social security numbers. Out of the 51 people targeted by Kleve’s group over a month-long period early last fall, 12 are Nebraska residents and 4 live in Lincoln, where Kleve is still attending school. One woman named by Kleve as a target is a UNL alumnus who graduated several years ago.

Referring to the people whose personal information he was collecting in the Pony Power server, Kleve suggested that he and his comrades might “go Turner Diaries on them.” The Turner Diaries is a novel widely revered by many neo-nazis for its step-by-step description of a white supremacist uprising that murders every person of color in the world. Oklahoma City bomber Timothy McVeigh cited the Turner Diaries as a major influence in his decision to blow up the Alfred P. Murrah federal building in 1995. 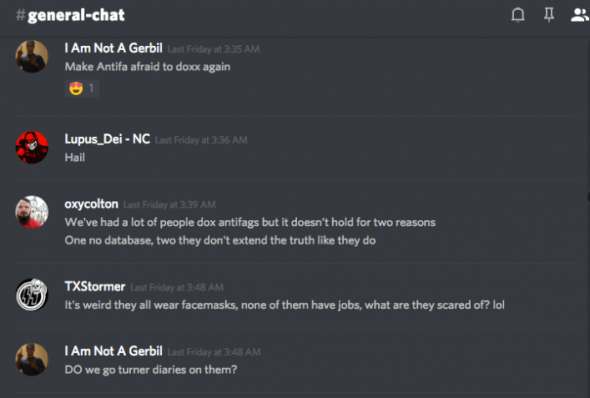 University of Nebraska-Lincoln administrators are being accused of looking the other way when it comes to Kleve in order to avoid angering right-wing groups. The university recently went out of its way to remove a lecturer to appease online harassers who targeted the employee for their presence at a protest against the alt-right group Turning Point USA.

School officials recently addressed the Kleve controversy with a boilerplate statement denouncing “bigotry” and “violence.” Administrators also stated that “we encourage civil and respectful discussion of ideas and opinions, even if they are different from our own,” language which many students took to mean UNL will continue to refuse to take action against Kleve.

During a ‘listening session’ held by administrators attempting to placate angry students, a school official told those gathered that they shouldn’t “focus” on the known white supremacist on their campus but instead discuss “larger” issues. “I feel like we’re making up every excuse not to solve an issue,” one woman of color enrolled at UNL told administrators during the meeting.

On Wednesday, February 7, hundreds of students rallied on UNL campus to oppose Dan Kleve’s continued presence on campus. UNL’s basketball team, the Huskers, recently organized their own protests against Kleve, displaying the message “Hate Will Not Win” during games.

“They’re protecting the freedom of speech for a white supremacist… but they’re not protecting our safety…A lot of students, a lot of my peers, didn’t feel safe yesterday…

What is he gonna do for the university to take action? Is it gonna be him killing somebody? It is going to be him showing up to campus with guns? What is it gonna take?“- University of Nebraska-Lincoln Senior Bryanna Shade

In a recent report about UNL student protests after the decision not to expel Kleve, Nebraska news afiiliate KETV NewsWatch7 noted that

“Some [UNL] students of color did not want to go on camera, partially in fear of being targeted by groups Kleve supports.”

Unicorn Riot reporters have filed several public records requests to the University of Nebraska-Lincoln regarding their discussions and decisions regarding Mr. Kleve. We hope to continue reporting on these events with the help of university documents that provide more insight into the story.