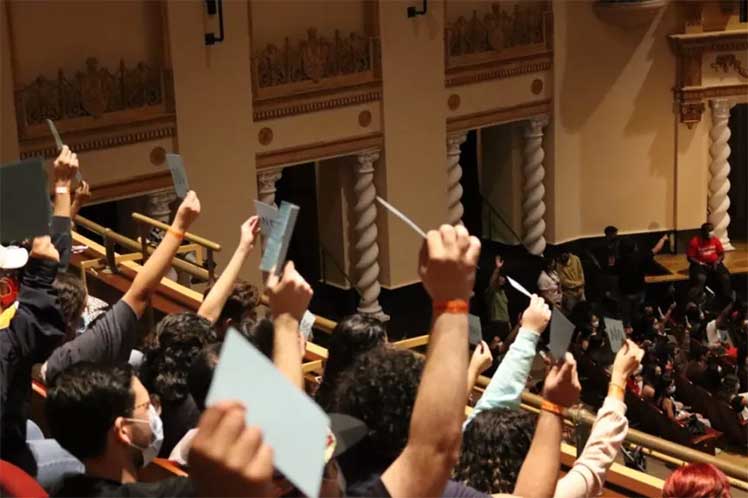 University Of Puerto Rico Students Have Declared An Indefinite Strike

San Juan. – The first student general assembly 2021-2022 at the Rio Piedras campus of the University of Puerto Rico (UPR) has announced an indefinite strike starting today, while other universities are on strike.

The university students, who arrived on stage at the main campus for the UPR, made the decision in light of the academic, administrative, social and economic problems that the campus suffers from.

The President of the Student General Council, Fabiana Marini Martinez, indicated that the debt settlement plan, which was promoted by the Financial Supervisory Board (JSF), was also rejected due to the implications for the academic institution.

In addition, he called for participation in a protest that will be organized by various sectors on November 8 in front of the Federal Building in the Hato Rey sector of the capital, where there will be a hearing on Puerto Rico’s public debt.

Students will walk from the Rio Piedras campus to the main American building in Hato Ri, where colonial control of this Caribbean nation, which was militarily occupied in 1898, is maintained.

The first gathering of 2021-2022 is being held amid student movements rejecting the debt adjustment plan, which they claim will seriously affect the UPR, as it will even lead to campus closures.

Several regions have carried out strikes, among which, in addition to Rio Piedras, Mayaguez, Carolina, Arecibo, Cayí, Ponce, Bayamon, Aguadilla and Ottoado.

Regarding the action taken by the students, the dean of the UPR in Rio Piedras, Luis Ferrao, said that there will be continuity of academic and administrative tasks remotely.

“I repeat the continuation of academic and administrative work remotely, while the strike imposed by students today continues to gather,” he said.

The process made it clear that providing uninterrupted semesters is a requirement for maintaining UPR accreditation, not only from the Middle States Commission on Higher Education (MSCHE), but also the professional accreditations that make colleges and schools more popular, both domestically and abroad.

At the same time, he repudiated the budget cuts made by the council-approved plan and reiterated, “Our displeasure is also that they cannot continue, and they must be restored.

“My commitment to all sectors of the university community is to join forces in the search for viable alternatives that advance the mission of this institution, but closure is not the alternative,” Ferrau said.