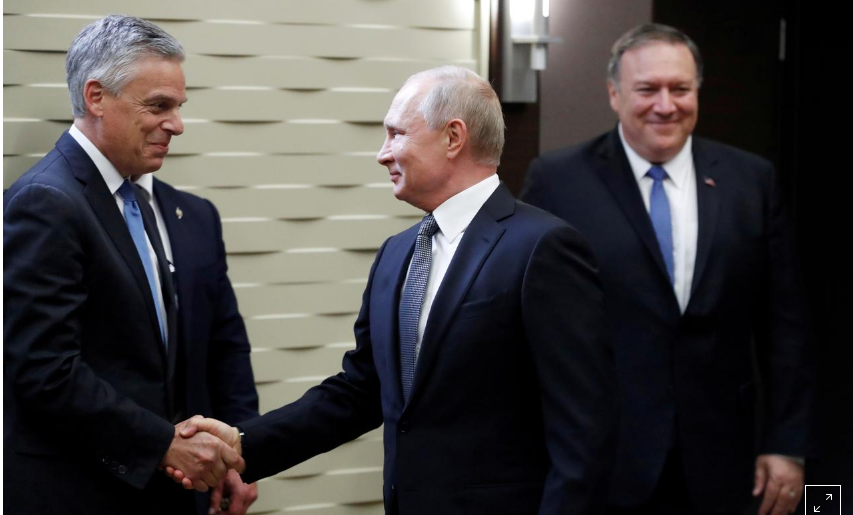 Above Photo: Russian President Vladimir Putin shakes hands with U.S. Ambassador to Russia Jon Huntsman, left, as U.S. Secretary of State Mike Pompeo stands behind prior to their talks in the Black Sea resort city of Sochi, Russia, May 14, 2019. Pavel Golovkin/Pool via REUTERS/File Photo

The New START treaty limits the number of strategic nuclear warheads the world’s two biggest nuclear powers can deploy to no more than 1,550, the lowest level in decades. It also curbs the number of nuclear launchers and deployed land- and submarine-based missiles and nuclear-capable bombers they can have.

“Some want to extend New START. Some are arguing in favor of creating something new. I’m not sure where it will go,” U.S. Ambassador to Russia Jon Huntsman told the Ekho Moskvy radio station on Wednesday.

The treaty’s future is in focus after the United States withdrew from another landmark nuclear missile pact with Russia this month after determining that Moscow was violating that treaty, an accusation the Kremlin denied.

President Donald Trump, who told President Vladimir Putin in 2017 he thought it a bad deal for the United States, will only decide next year whether or not to extend the surviving New START treaty, U.S. officials have said. It was signed by his predecessor Barack Obama with Russia in 2010.

Regarded by many experts as the only thing preventing an unfettered arms race between the two Cold War rivals, the treaty can be extended for another five years, beyond its expiry date in February 2021, by mutual agreement.

Huntsman said the treaty had been agreed at a time that predated cyber warfare, hypersonic missiles, underwater nuclear platforms and torpedoes and what he said was China’s strategic nuclear build-up.

“So there are a lot of open questions. There will be discussions and agreements and disagreements about the vehicle to use – should it be an extension of New START, should it be something altogether new?” he said, saying Trump favored an arrangement that would bring things into the modern era.

Putin has said Moscow is ready to extend the pact, but has complained about what he sees as Washington’s lack of interest.

In June, after describing the nuclear threat as a “fiery serpent” that needed to be kept under control, Putin lamented what he said was a U.S. refusal to engage properly on the subject.

“If no one is interested in renewing (the treaty)… we will not renew it,” said Putin.

On Tuesday, the Kremlin boasted that it was winning the race to develop new cutting-edge nuclear weapons despite a mysterious rocket accident last week in northern Russia that killed at least five people and caused a brief spike in radiation levels.

Moscow is developing a nuclear-powered cruse missile that it says will have an “unlimited range” and be able to overcome any defenses.