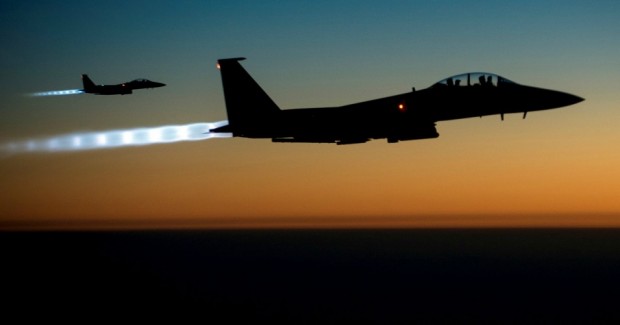 The U.S.-led coalition has been accused of killing as many as 28 civilians, including a woman and seven children, near the northern Syrian city of Manbij on Thursday—the same area where U.S.-led airstrikes last week may have killed scores of civilians.

“The Manbij area,” as the Associated Press describes, “has seen extensive battles between IS [Islamic State or ISIS] extremists and U.S.-backed Kurdish-led fighters.” It is also where UNICEF estimated last week that there are 35,000 children trapped “with nowhere safe to go.”

According to the U.K.-based Syrian Observatory for Human Rights, the latest casualties came after international coalition “warplanes targeted areas in the town of al-Ghandour, which is more than 23 kilometers [14 miles] away from Manbij city, and the death toll is expected to rise because there are some people in critical situation.”

U.S. Central Command issued a press release Thursday in response to the allegation. It confirmed coalition “airstrikes in the area in the last 24 hours,” adding, “As with every report of civilian casualties, we will review any information we have about the incident.”

The U.S. military said Wednesday it was opening a formal investigation into whether civilians were killed in last week’s airstrike that may have killed over 70 people, including women and children.

And on Friday, a maternity hospital in the northwestern part of the country was hit by an airstrike. It is not clear at this point who carried out the attack or if the hospital was directly targeted.

According to the U.K.-based charity Save the Children, which supports the Idlib province hospital, airstrikes hit the entrance to the building. At least two people have been killed, the charity told the Independent.

The news of the fresh strikes comes after Russian and Syrian officials announced humanitarian corridors for those civilians and surrendering rebels seeking to flee the northern city of Aleppo, which is roughly 50 miles from Manbij.  According to U.N. Special Envoy for Syria, Staffan de Mistura, however, the creation of safe corridors is “our job.”

“How do you expect people to walk through a corridor—thousands of them—while there is shelling, bombing, fighting?” de Mistura said.

“For years the Syrian government has blocked crucial aid from reaching besieged civilians while subjecting them to the horrors of daily shelling and air strikes, using starvation as a weapon of war and deliberately causing unbearable suffering to those living in opposition-held areas,” said Philip Luther, director of Amnesty’s Middle East and North Africa program.

“Providing safe routes for those civilians who wish to flee Aleppo city will not avert a humanitarian catastrophe. It is not a substitute for allowing impartial humanitarian relief for civilians who remain in opposition-held areas of the city or other besieged areas, many of whom will be skeptical about government promises,” Luther continued.

Transparency watchdog Airwars estimates that the international coalition has killed over 1,500 civilians in its campaign against ISIS.