Above photo: Stella Moris and son Gabriel, right, and Max leave Belmarsh prison after visiting her partner and their father, Julian Assange. irishexaminer.com.

His two children could lose their father for the rest of their lives.

Although important legal principles are at stake in the extradition trial of Julian Assange, for which a ruling will be handed down on January 4, it should not be forgotten that there are important human issues at stake as well.

One such issue is Assange’s health, which has progressively worsened under what seems to be cruel and even sadistic maltreatment by the British government, including the refusal of appropriate medical care and confining him in his cell for 23 hours a day, seven days a week.

The other is that, if the Judge’s ruling is adverse, Julian’s two children may never see their father again.

Many stories have been written about the legal issues in Julian’s case, and the chilling effect that his extradition to the U.S.—where he will almost certainly be imprisoned for life—would have on journalists around the world who seek to expose the lies and crimes committed by their own governments.

Most of those stories present Julian, primarily, as a symbol, a hero to his principles, and an ominous example in how far tyrannical governments and corrupt politicians will go to keep their citizens ignorant and submissive.

But Julian is more than a symbol. He is also a father, a husband-to-be (even if he may have to be married in prison) and, most importantly, a human being—one who, as the world watches in horror and shame, is being subjected to calculated assaults on his physical and mental health in hopes that he will quickly die and spare the British and American governments the embarrassment of having to deal with him.

For nearly three years Assange and his partner, Stella Moris, had successfully kept their personal relationship and the existence of their two children a secret. Moris only revealed it (on April 11) because “Julian’s poor physical health puts him at serious risk, like many other vulnerable people, and I don’t believe he will survive infection with coronavirus”—which had been spreading rapidly through the British prison system, especially at Belmarsh, the high security prison in which Assange is being held. 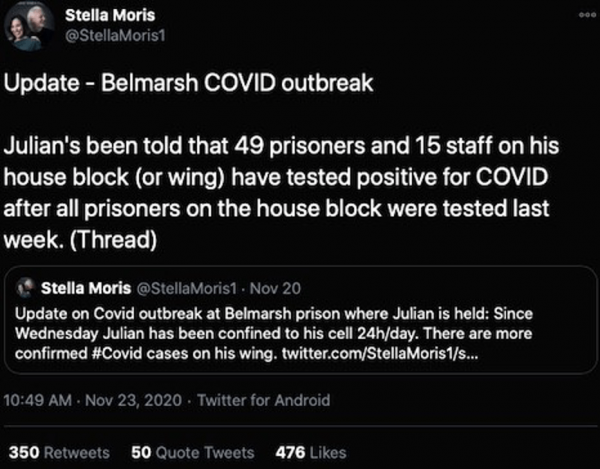 As a prison, Belmarsh has a very bad reputation, and is ordinarily reserved for the most violent and dangerous prisoners, which Assange was certainly not. Once known as “Britain’s Guantanamo Bay,” a number of its inmates participated in high profile terrorist attacks, and at least one ISIS executioner, nicknamed “Jihadi John” resides there.

For much of his stay at Belmarsh, Assange has been forced to remain in his cell for 23 hours a day and has even been deprived of a radio. Three prisoners have died at Belmarsh this year under unexplained circumstances, and another was discovered dead in his cell just last month. With Coronavirus spreading throughout the facility, the danger to Assange increases every day.

Noting Assange’s growing fragility, Moris said that, “I have discovered that love makes the most intolerable circumstances seem bearable but this is different, I am now terrified I will not see him alive again.”

Stella Moris, 37, is a South African-born attorney who met Assange in 2011, after she had been engaged by his legal team to help fight his extradition.

“Over time,” she said, “Julian and I developed a strong intellectual and emotional bond. He became my best friend and I became his.” Their actual relationship began in 2015, under what she described as “extraordinary circumstances.” They became engaged in 2017.

Moris had been raising their two children on her own, as a single mother, and did her best to shield them from the harmful publicity she knew would surround them if their existence became known. But she changed her mind and finally went public, she said, because their lives were now “on the brink,” with Assange facing death every day as a result of his rapidly deteriorating health, which made him all the more vulnerable to the wave of Covid-19 spreading through Belmarsh.

“Julian has been fiercely protective of me and has done his best to shield me from the nightmares of his life,” she said. “I have lived quietly and privately, raising Gabriel and Max on my own and longing for the day we could be together as a family. Now I have to speak out because I can see that his life is on the brink.”

In a video interview with the Daily Mail, Moris revealed that, via a secret video hookup, Assange was able to observe the births of both of his children in real time, at the hospital in London. He later was also able to meet Gabriel in person after Moris smuggled him into the embassy, without revealing that Assange was the father.

She further revealed that both boys had visited their father in prison, and that the couple planned to marry, even if Assange had to spend the rest of his life behind bars.

Moris says they were told by someone on the Ecuadorean embassy staff that the CIA (which had illegally planted spy cameras all over Assange’s quarters, including his bathroom) had tried to steal some of Gabriel’s DNA from his diaper because they suspected that Assange might be the father and wanted confirmation.

There were also reports that the U.S. plotted to kill Julian Assange and make it look like an accident, and that spies discussed kidnapping or poisoning him in the Ecuadorean embassy. That story appeared in the February 25 Daily Mail, but was surprisingly (or not so surprisingly) not followed up by corporate media.

Although not often covered, the human side of Julian Assange, even when reported, has too often been presented by the media in lurid tabloid fashion, not for sympathy but for sensation.

There has, in fact, been precious little sympathy for Assange in the media, and as a result his case has not been widely—or fairly—covered. The BBC, especially, has virtually buried all mention of the trial, even though it is taking place in their own backyard, and will have a huge impact on the way their reporters will be able to cover the news in the future.

What we and the rest of the world—especially members of the working press—will now have to do is simply bite our nails until Judge Vanessa Baraitser (a notoriously “hanging judge” with a 96% record of approving extraditions) hands down her ruling on January 4.

Steve Brown is a member of the Editorial Board of CovertAction Magazine.