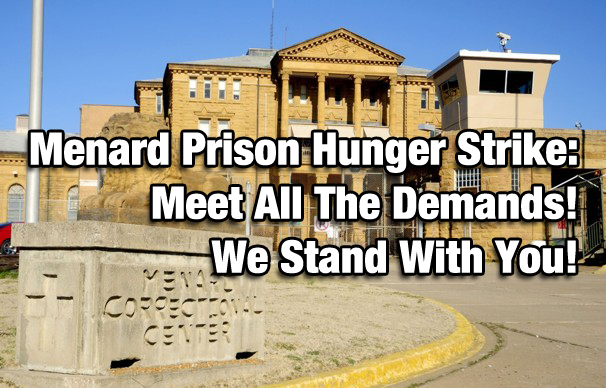 Above photo: Photo of Menard from GregoryKoger.com.

Note: Prisoners at Menard Correctional Center have been working for years to end abusive conditions such as solitary confinement. You can support them by contacting Warden Kim Butler and telling her to keep her promises to the inmates. The phone number is (618) 826-5071.

Menard, IL – On September 23, 2015, at least 19 (and possibly as many as 22) men in Administrative Detention at the Menard Correctional Center began a hunger strike that ended on September 28.  It was nearly a week after the hunger strike ended before we received any mail from them. The following is a composite account based on what they sent us, written on the first and last days of the hunger strike.  Alice Lynd.

“On 9-23-15, after filing multiple grievances dealing with my diet tray, indeterminate seg hearings, yard conditions as well as living conditions,  . . . and no response or action taken, I declared a peaceful hunger strike. . . . I declared my hunger strike only after trying multiple ways to bring relief to my issues which were and still are being completely ignored.”

Day 1 began at 8:00 am when protesters from St. Louis and Chicago “came beating and banging instruments . . . chanting ‘End Administrative Detention’; ‘Our Passion For Freedom Is Stronger Than Their Prison!!’ And at around 4:00 pm, the protesters returned, ‘bringing more noise and love!’”

“We heard them loud and clear. We hope they heard us too.  We didn’t yell as much as we wanted because they sent [correctional officers] to the wings and catch guys yelling and write them up, trying to silence us.  But that did not stop anything, and won’t.”

“Our supporters from our last hunger strike showed up in front of the prison. . . .  Even though we can’t see them due to the covers that were placed on our windows, we were able to hear them.  We were threatened by the major, lieutenant and staff members that if we said or yelled out anything to them they were going to write us tickets and ‘give us something to yell about.’  Officers were outside hollering to our supporters, telling them that it was all lies and we were not on hunger strike. Some of us yelled out and told our supporters that we are on strike and we started making noise to assure our supporters we were here and on hunger strike.  They (officers) came and searched a cell to just make a mess and try to intimidate us.”

The hunger strike “wasn’t official until we denied our food.  So once that was made official, they sent . . . [correctional officers] to intimidate and search our cell and remove all food item and toothpaste. . . They were throwing away other things that had nothing to do with a hunger strike, like . . . my watch, . . . hair grease, bowls, lamps, even taking medications. . . . And of course they were making their ‘smart’ comments.”

Two guys were moved to segregation.  The officers found a sheet that the prisoners were using as a clothes line to hang wet clothes on and to exercise with as a jumprope.  “Now in retaliation to us doing what we’re doing, they are saying that the 2 prisoners in that cell were trying to use this line to escape!  They . . . placed them in an escapee cell, which is completely sealed up with steel, no windows or any opening to look out . . . . They took all their belongings.  They have nothing with them, not even hygiene items. . . . Officers came back to the empty cell (where the 2 guys were housed) with screwdrivers and were messing with the outside window, as if trying to cause damage to this window.  When walking out the cell they said, ‘I bet they’ll never go on hunger strike again!’ and laughing.  They are now most likely going to charge these 2 prisoners with attempt to escape. . . .”

“We ask for our supporters to please call down and complain against these officers and institution’s retaliation against these 2 prisoners.  Please mention that we are grateful and appreciate their support.”

“No medical examinations are being done, as if they are not trying to document our hunger strike.  I believe they are trying to hide the fact that we are on strike.  On our last strike, we were evaluated on our first day of declaration and every day after that.”

Disciplinary reports were issued to each hunger striker for the offense of “Dangerous Disturbance” for declaring the hunger strike.  “I declared a peaceful hunger strike, that in no way was a dangerous disturbance, or causing, or directing, or participating in any action which may seriously disrupt or endanger the institution, person, or property. . . . This ticket [was] written in retaliation . . . for my multiple grievances.”

On day 4, Warden Butler and the Warden of Programs spoke with one of the hunger strikers.  Warden Butler “conceded to some of our demands, gave her word that things would get better and a better communication line would be established—in exchange of us calling off the strike.

The prisoners considered her offer and voted to accept it.”

“The Wardens made their rounds and spoke to everyone and reiterated the agreement.  [Warden Butler] began by taking care of all 21 disciplinary reports.  In addition to the said changes, the Warden told us that she would now be a part of the review hearings. . . . We’re told that they’re trying to start letting more people out of A.D.

“Although our main goal is to end solitary confinement, we hope that we could work with Ms. Butler.  I think by us affirming our own humanity she was forced to see us and acknowledge us.”

“I ended up coming off Sunday night.  (The warden wanted everyone off by Monday for the tickets to be expunged.) [W]e hope [the promises] are not empty.  But nothing . . . will benefit the overall situation, except if the hearings actually become meaningful.

“I’ve cut off all communications with . . . my family. With the choices I’ve had to make and struggle to make, I don’t want for them to worry nor hinder me. . . . They cannot see the conditions or that I’m barely breathing inside of these four walls.  Words will not make them understand.  Nor will they understand . . . why I insist on making things better for the next individual that will rest in this tomb? . . .”

“The goal now is to consolidate our outside support.”

“Hopefully they don’t follow through with their threats about shipping some of us out [of] state as they did last year.”

“Everyone says thanks and they appreciate your support.”

We ask the public’s help by calling the warden, the Director of the Illinois Department of Corrections, and the Governor.

Office of the Governor