Above photo: Edwards Cinemas keeps its lights on as it stays empty on a Friday night in Houston on March 20, 2020. Elizabeth Conley, Houston Chronicle / Staff photographer.

Congress must act to mitigate harm from unprecedented joblessness.

The number of workers applying for unemployment insurance (UI) benefits has risen to never-before-seen levels as a result of the coronavirus shock. In the last six weeks, nearly 28 million workers have applied for unemployment compensation. That is more than one in six workers, and over five times the worst period of the Great Recession.

I should note that the Department of Labor (DOL) reports that 30.3 million workers applied for UI during the last six weeks on a “seasonally adjusted” basis, compared with 27.9 million on an unadjusted basis. Seasonal adjustments are typically helpful—they are used to even out seasonal changes in claims that have nothing to do with the underlying strength or weakness of the labor market, providing a clearer picture of underlying trends. However, the way DOL does seasonal adjustments is distortionary at a time like this, so I focus on unadjusted numbers here.

A new EPI survey finds that for every 100 workers who were able to file for unemployment insurance, 37 additional workers tried to apply but could not get through our UI systems to make a claim. That suggests that if the systems were able to handle the flood of claims they are currently facing, the number of UI applications over the last six weeks would have been as high as 38.2 million (38.2 million is equal to 27.9 million times 1.37, and is an outside estimate because it is possible that some workers who had been unable to get through the system to make a claim by the time they took the survey were able to later get through). 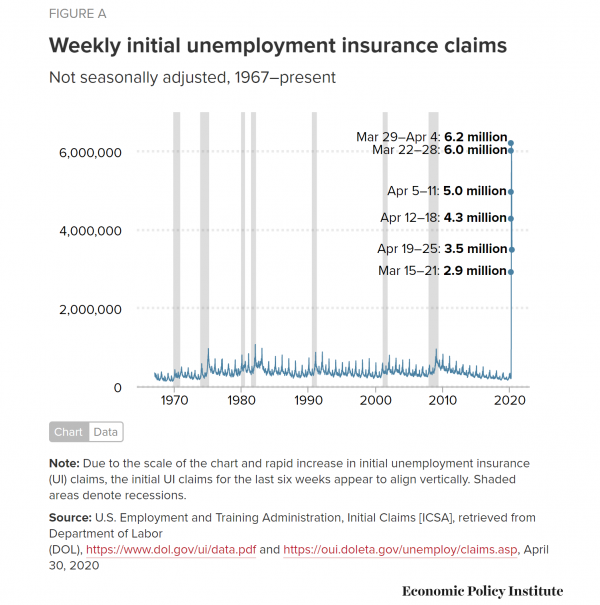 In addition to not including people who were unable to make it through the system, UI claims data may not include many people who aren’t eligible for regular UI—think gig workers or people who had to leave their job to take care of a child whose day care closed—and have applied for Pandemic Unemployment Assistance (PUA). PUA is the new federal program that extends unemployment compensation coverage to many workers who are not eligible for regular UI but are nevertheless out of work as a result of the virus. It is not clear how many states are reporting PUA claims along with their regular UI claims, and how many are not.

It is also difficult to determine how many of those who managed to apply for UI are actually receiving benefits. Between March 14 and April 18, the total number of workers counted as “continued claims” increased by 15.7 million (continued claims—also known as “insured unemployment”—are workers who have made it through the first step of processing and are either being paid or on their way to being paid, or their case is still pending). Over the same period, 24.4 million workers filed new unemployment insurance claims. That means that by April 18, roughly 15.7 million out of 24.4 million new filers, or 64.4%, had made it through the first step of processing. Applied to the current data, that would mean that roughly 9.9 million UI applicants from the coronavirus period have not yet even made it through the first step of processing, much less received benefits. The latest data available on actual payments are from March, and they reveal that only 14.2% of workers who filed new claims in March received an unemployment check. We don’t know what the April payment data will look like, but even if the March share has tripled, that would mean that 16.0 million of the 27.9 million workers who filed initial claims are still waiting for benefits.

One bit of good news is that UI claims have dropped in each of the last three weeks, from a high of 6.2 million in the week ending April 4, to last week’s 3.5 million. However, the fact that having “only” 3.5 million jobless claims in a week is a welcome development is a stark testament to how extreme the numbers have been in recent weeks. And, of course, workers aren’t just losing their jobs. Our health care system ties health insurance to work, so millions of workers have likely already lost their employer-provided health insurance.

Short-Time Compensation (STC)—also known as work-sharing—is an alternative to layoffs for employers who see a drop in demand for their goods or services. STC allows employers to reduce hours of work for their workers rather than laying some workers off. Under STC, workers who have their hours reduced get partial UI. Unfortunately, the STC infrastructure is not well developed and many states do not even have an STC program. STC would ideally be being used extensively right now to save jobs, but—while it is ramping up—the levels remain very low. On April 11, 62,297 workers were receiving STC, a tiny fraction of the 16.2 million receiving regular state benefits at that time. Additional aid to states should be provided to implement, improve, and promote STC programs.

Further, job losses are ongoing. The relief and recovery packages passed so far are not big enough to deal with the scale of this crisis, and more aid is crucial. The Congressional Budget Office projects that without additional relief, the unemployment rate will average 16% in the third quarter of this year and 10.1% for the entire calendar year of 2021. One thing the next federal relief and recovery package should do is make additional investments in unemployment compensation, including providing additional funding to states to hire the staff they need to speed up processing and to make improvements to websites and other administrative infrastructure. The UI data show that states don’t yet have what they need to effectively deliver crucial relief to workers and their families.

The next package should also include $500 billion in aid to state and local governments, include provisions to protect workers’ paychecks, include worker safety and health protections, and invest in our democracy. We must also make significant investments in testing and contract tracing because, absent a vaccine or effective treatment for the virus, there is no way we will be able to reopen the economy successfully without an effective system of testing and contact tracing in place. It is likely that with 200,000 contact tracers, we could establish an effective tracing program. The federal government hires half a million temporary workers every 10 years to conduct the decennial census—we could and should do large-scale hiring of public workers for contact tracing. That is one investment that would help not just in controlling the virus and allowing us to reopen earlier, but would also help the workers who would get those jobs, and their families, and therefore help the broader economy.