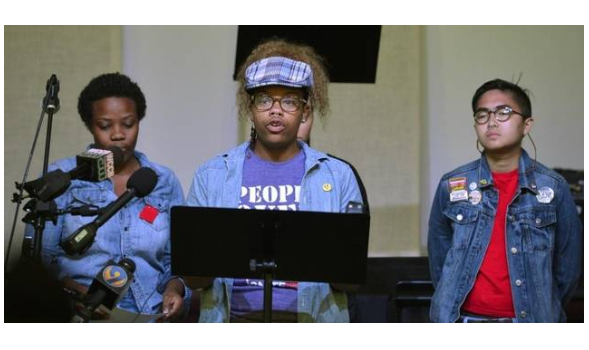 Above Photo: Tamika Lewis, a member of the Uprising coalition, read a list of demands in the aftermath of Keith Lamont Scott. Davie Hinshaw dhinshaw@charlotteobserver.com

Local and state activists called Monday for Police Chief Kerr Putney and Charlotte Mayor Jennifer Roberts to resign, as the city’s latest round of tension between police and the black community moves into its second week.

At a Monday news conference held by Charlotte Uprising, a coalition that emerged during last week’s protests, speakers said both officials have failed to protect the city’s African American and working class citizens and withheld information about two fatal shootings last week.

Bree Newsome, a Charlotte organizer who rose to national fame when she removed the Confederate flag from the South Carolina statehouse in 2015, says the Sept. 20 shooting of Keith Lamont Scott by a Charlotte-Mecklenburg police officer was the latest in “an established pattern of cover-up and misconduct on the part of CMPD.” Scott was African American, as was Justin Carr, who was fatally shot during a protest in uptown Charlotte the next night.

“This moment represents a tipping point for a community that has had its trust repeatedly broken by the Charlotte-Mecklenburg Police Department,” Newsome said.

Jose Mujica, a student and organizer, accused police of shooting Carr and framing another black man. The shooting occurred after an angry crowd surrounded police clad in riot gear, who fired tear gas and possibly other projectiles. Mujica, who was near the shooting, acknowledged that the scene was chaotic and he did not actually see any officer fire at Carr, but said many participants believe the shot came from the police.

Local ministers who were also near the shooting have said it was impossible to tell who fired the shot, while one eyewitness has said he saw another black man in the crowd fire the shot. On Friday police charged 21-year-old Rayquan Borum with murder in Carr’s death.

Uprising speakers and the local ministers agreed that the appearance of police in riot gear escalated tension just before the shooting.