Above photo: The protests were coordinated in 33 cities across Chile. | Photo: CUT

Today, October 19, the crisis in Chile escalated with rebellions breaking out in Concepción, Punto Arenas in the South, Valparaíso, and elsewhere. Despite the state of emergency and military with tanks and armored vehicles patrolling the streets, people were out continuing to protest.

Santiago continues to be a war zone. By 3:15 pm 16 buses were burned. At 4 PM, tanks rolled into Plaza Italia, one of the city’s central plazas. More metro stations were consumed by fire. By 6 pm there were fires and barricades in Concepción, the third largest city. 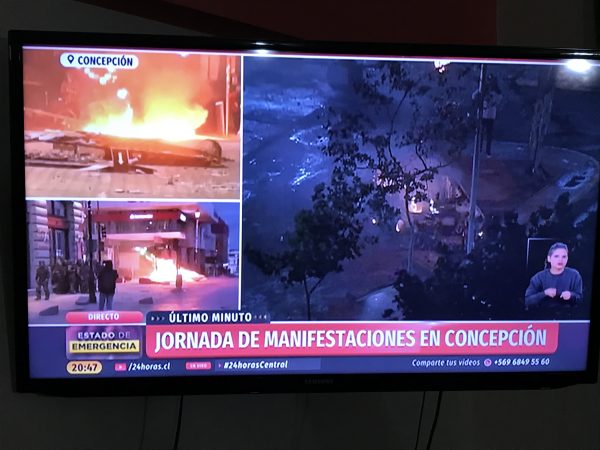 The government seems to be on the defensive. About 6 PM Piñera came on TV to say “I have heard the voice of my compatriots.” He said he would suspend the fare increase (that would be a victory) and next week host a roundtable to discuss the issues. “The people will be heard—but the protests have to stop.” He also announced the congress would meet on Monday in an “extraordinary session” to discuss the increase in metro fares.

The protestors’ answer was to continue demonstrations in Santiago and beyond, including Valparaíso where we live.  There are skirmishes with the military in downtown Valparaíso, and the city is basically cut off from public transport. Turbus, the bus we take to Santiago, suspended service as did the metro, and all bus service is suspended.  Demonstrators created barriers on the highway from Santiago to Valparaíso, blocking the military from sending more troops to Valparaíso. There is smoke over Valparaíso, and the military has taken over and is occupying the streets of the city we are living in. 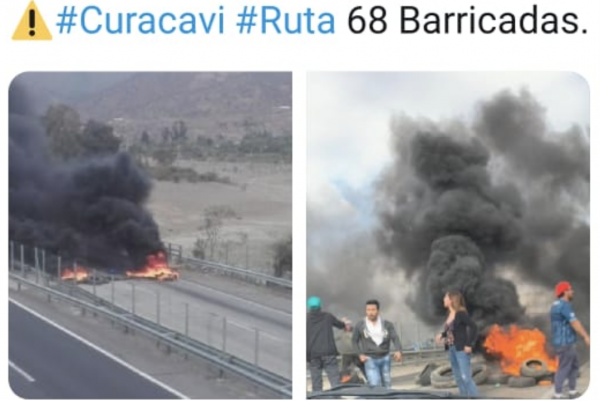 The sound of banging pots and honking horns throughout the cerros sent us outside earlier, at about 7:30PM. We ran into our neighbor who was out to buy water, with her “banging pot” in her market basket. Together we hung out with the muralists who were at the neighborhood school mounting a plaque next to the mural they created just a week earlier of Rodrigo Rojas de Negri, victim of the dictatorship in 1986 (see our blog). The streets were filled with cars.

Tonight, echoes of that dictatorship hang over Valparaíso and all of Chile. But so do banging pots and honking horns that ring through the streets and cerros and off balconies of our building. We talked to some older people in the stores and our apartment building. They said they understand the protests. Prices are high and salaries are not high. Pensions are fixed but costs go up. They said the young people who organized the fare evasion [see yesterday’s blog ] were striking for the pensioners who can’t protest themselves even though the young people aren’t affected. A young woman in the store said it’s like 1973. The metro fare hike was just the last straw in a long list of grievances about a system that has robbed working class and middle class people of a decent and dignified life.

Tonight protesters in Valparaíso set fire to El Mercurio, the right wing newspaper that was instrumental in creating conditions for and supporting the coup in 1973. El Mercurio is truly a symbol of the dictatorship.

Media note: While CNN Chile commentators talked about the violence they looped a video of people looting a Walmart. The 14-second video, sped up to make it look like people were running crazed through the store, looped 16 times in a row with the subtitle: Walmart cierra sus locales en región metropólitan [Walmart closes its stores in the metropolitan region]. Demonstrators ransacked 60 Walmart supermarkets throughout the country.