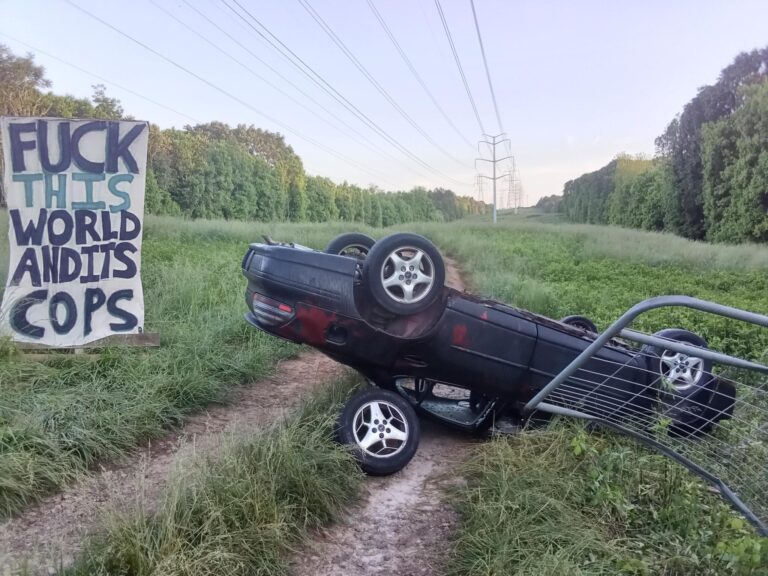 A black sedan barreled it’s way into the south power cut blocking off a MAJOR entrance to the woods off Constitution Road across from Black Hall Studios Sunday night, May, 8th, accompanied by a banner that states, “Fuck this World And It’s Cops”– kicking off the, “Week of Action,” to, “Defend the Forest,” in south Atlanta…

A huge ass bonfire along with a vast array of fireworks and feral friends silhouetted and serenaded the break in the forest that has now come to be one of the main zones to defend against police incursion into the woods so many people and non-human animals call home.

Cop City and Black Hall Studios will NEVER be built as long as Forest Defenders occupy these 500 or so collective acres of woods and comrades continue to engage in the practice that, “solidarity means attack,” in regards to fending off the kkkops, impending industrial and suburban sprawl into wild areas, & the generalized evil, “machines”.

“Fuck this World & It’s Cops,” denotes that we can build a better world than the brainwashed, authoritarian, colonized and greedy ass scum that aim to destroy anything they cannot easily destroy, subjugate, imprison, or pave over….

Stay Wild! Help keep/get your comrades and loved ones free!

Bring the War home and Make total destroy– for it is a “privilege” to be able to “choose” when some people “fight” the powers that be, as the poor, the houseless, the marginalized & disenfranchised must fight this battle EVERY DAY to merely keep existing ….

“Fuck this World And It’s Cops,” means we fight back, and don’t go quietly into the night & we do NOT acquiesce to non-, consensual tyranny.

Destroy what you can and build what you must– in every sense of the words…Abolition on multiple levels!

May the upside down black sedan in the powerline cut pathway to the forest serve as a big-ass, “Fuck you and the cogs that help you operate,” to the Atlanta Police Foundation, APD, Dekalb County Police, Black Hall Studios, all their investors and sympathizers, and of course, Georgia Fucking Power.

FUCK THIS WORLD AND ITS COPS.