Uranium Mining In The Grand Canyon Continues Despite Resistance

Above Photo: From wakingtimes.com

Sad but true, the dramatic opposition to the Dakota Access Pipeline on the Standing Rock Indian Reservation in North Dakota failed to achieve the result of stopping corporate and political powers from proceeding with the pipeline. Less than six months after the camp’s abandonment, the pipeline is functional and leaks are already being reported.

Another, less publicized, struggle has been taking place for years around the area of the Grand Canyon, where indigenous rights and environmental activists have been seeking a ban on uranium mining in this part of America’s breathtaking landscape. Beginning in the 1950’s when a rush to draw uranium for the first generation of nuclear weapons brought mining operations to this region, opponents recently lost a bid to prohibit the mining and processing of radioactive materials near the iconic Grand Canyon.

The environmental impact of uranium mining and processing is devastating, as radioactive contamination is common, affecting people as well as wildlife, springs, aquifers, and sacred sites. There are at least 4 mines currently in operation near the canyon, and over 3000 viable claims for potential future mining, and an official superfund cleanup site near the canyon, signaling the potential for a massive industrial wasteland to develop.

“The US Geological Survey has identified 15 springs in the Grand Canyon with dangerously high uranium levels “related to mining processes” from past ventures. While the elevated concentrations of uranium in the water may not seriously harm a single thirsty hiker, it can have long-term health effects on those who drink it for decades. It could also threaten wildlife in the Canyon, which contains several endangered species that rely on water from its aquifer-fed springs.” [Source]

A Koch Brothers led ‘dark money’ group in Arizona is seeking to overturn the Antiquities Act, the law President Teddy Roosevelt used to permanently protect the area in 1908, which wold allow for uranium mining on the actual rim of the Grand Canyon, thus showing how monied interests are able to manipulate the law to exploit natural areas. 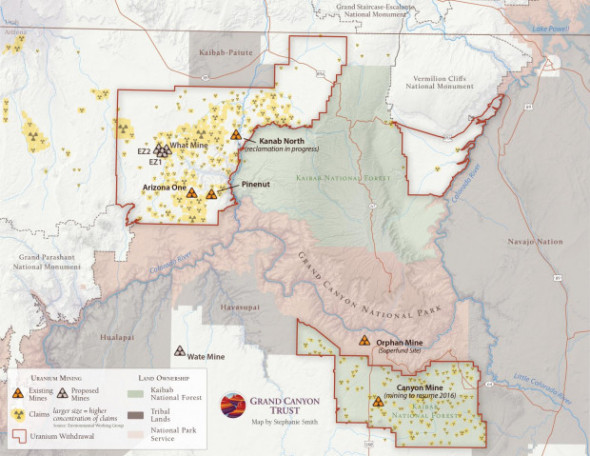 For some, however, the struggle continues, and members of the Navajo Nation succeeded in banning all uranium mining and processing on their lands, an effort made possible by the overwhelming evidence that mining facilities were damaging the health of locals.

“The Navajo Nation, which also borders the Canyon, banned all uranium mining and processing in 2005, after suffering a decades-long health crisis caused by radiation exposure from its poorly regulated mines.” [Source]

Of particular concern is the area surrounding Havasupai Falls which is of extraordinary natural beauty, and home to the Havasupai Indians who in 2015 lost a bid to stop mining in this area when a judge ruled in favor of mining projects.

“U.S. District Court Judge David Campbell denied a request to halt new uranium mining at the Canyon uranium mine, located only six miles from Grand Canyon National Park’s South Rim. The Havasupai tribe and a coalition of conservation groups had challenged the U.S. Forest Service’s decision to allow Energy Fuels Inc. to reopen the mine without initiating or completing formal tribal consultations and without updating an obsolete federal environmental review dating to 1986. At stake are tribal cultural values, wildlife and endangered species, and the risk of toxic uranium mining waste contaminating the aquifers and streams that sustain the Grand Canyon and Colorado River.” [Source]

To add fuel to this fire, the U.S. government is aiming to increase its nuclear weapons arsenal while simultaneously threatening nuclear war with North Korea and Russia. This type of nuclear expansion requires fuel, and many are concerned this area is doomed to become a hotbed of mining in coming years. 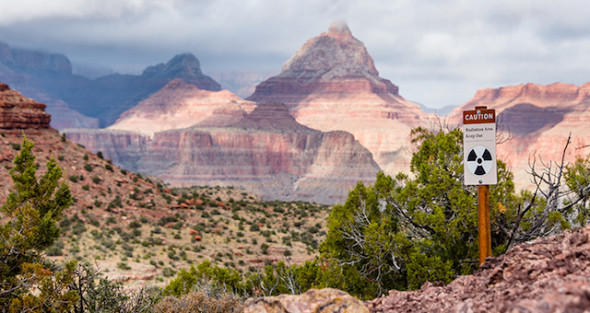 The Grand Canyon, which was established as a national park in 1919, is one of North America’s most treasured natural resources. As pipelines, frack wells and tar sands projects spread through the Southwest, protecting these resources from for-profit corporate destruction will become more of a pressing issue for those living nearby and for those concerned with conservation.

In 2016 an online survey asking if people wanted to see the preservation of these lands received an overwhelming, viral response in support, yet there is little to no interest for this at the government level, meaning that just as at Standing Rock, there is the grave probability this area will be dominated by industry.