Above Photo: The Light Brigade’s ‘NO TO URBAN SHIELD’ lights up the space outside the Berkeley City Council Meeting on Dec 1st.

The latest fight against Urban Shield and the militarization of police took place in Berkeley over the past few months. Members of the Stop Urban Shield Coalition joined Berkeley Copwatch and theOakland Privacy Working Group in attempting to get Berkeley to stop sending police to Urban Shield training exercises for at least next year (2016).

They failed, but in doing so publicized the role Urban Shield plays in the militarization of local police, and the racist and gun-worshiping auras that hang over the entire Urban Shield operation. 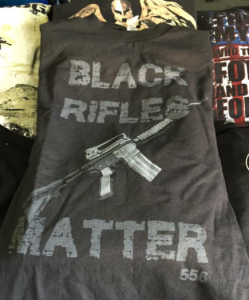 In November, Berkeley’s Police Review Commissiontook up the issue of Urban Shield. The Berkeley Police brought what seemed like an entire SWAT team to testify, putting on an impressive dog-and-pony show, even going so far as to call in “mutual support” from employees of the Alameda County Sheriff’s Department (which sponsors the annual Urban Shield exercises using money from Bay Area UASI) to speak. Community members along with people from Berkeley Copwatch and Oakland Privacy presented their case, using the now-infamous best-selling  “Black Rifles Matter” t-shirt (available at the Urban Shield trade show) as a case in point. Despite a passionate plea from the only African-American on the Police Review Commission against police militarization, the proposal for a one-year moratorium failed on a 4-3 vote.

On December 15th, after being delayed for two weeks, that same proposal came before the Berkeley City Council in the form of a substitute motion by Councilperson Kris Worthington, proposing a one-year moratorium on Berkeley’s participation in Urban Shield. After public testimony, with speakers from Critical Resistance, AROC, Berkeley Copwatch, Oakland Privacy and other orgs,  with every member of the public save one speaking against Urban Shield and despite a video of Urban Shield 2015 showings its gross militarization, the City Council voted 5-3 to reject the moratorium proposal. 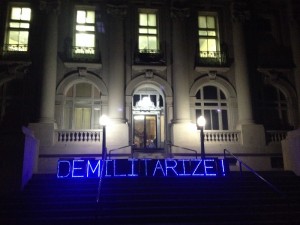 OUTSIDE OF BERKELEY CITY HALL ON DECEMBER 15TH.
A MESSAGE TO CONVEY EVERYWHERE ACROSS THE US.

The recent firing-squad execution of Mario Woods in San Francisco when de-escalation would have saved his life, the murder of Pedie Perez in Richmond a year ago when the officer could have simply backed away, and the insane “performance” of the Oakland Police as they murdered Demouria Hogg because they couldn’t think of anything else to do as he lay sleeping in his car, are all indicative of the “training” and mentality Urban Shield provides the police forces that go to it.  It is shameful that any City Council allows its police force to continue to participate instead of demanding de-escalation exercises and training which would save lives, not add to the ever-growing roll of those “Killed by Police.”