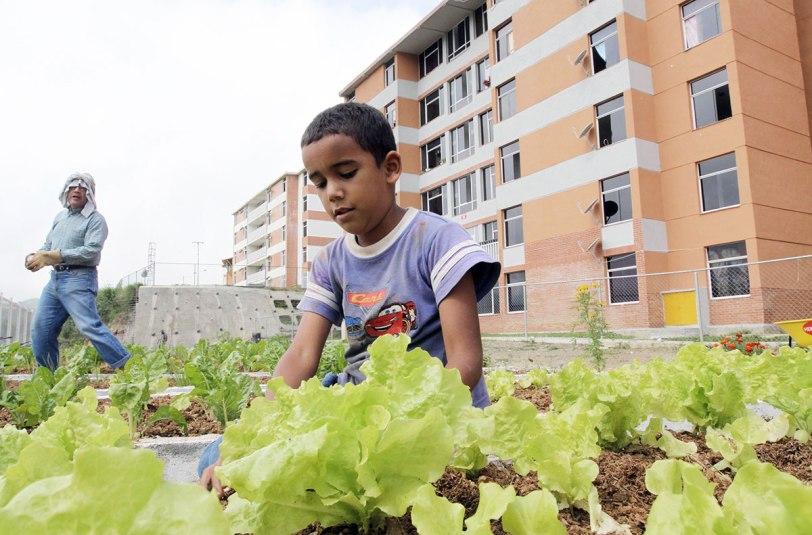 Urgent: Food Sovereignty Delegation To Venezuela – Witness Effects Of Sanctions And Responses On The Ground

What’s going on right now in Venezuela? Come see for yourself how Venezuelans are coping with US economic sanctions designed to cause a social implosion. Sensationalized reports of Venezuelans eating zoo animals and rotten garbage present a distorted picture of what is happening in Venezuela. The media also omits serious analysis of the role of the food distribution program known as CLAPs run through a government-community partnership reaching millions of Venezuelans. There is no doubt, however, as indicated in a recent report by CEPR, that the US-imposed sanctions are indeed causing collective hardship and even death.

Join us for a special delegation (August 19-28, 2019) dedicated to studying the actual conditions on the ground and the struggle for food security and food sovereignty in Venezuela, at a time when the Donald Trump’s administration has initiated a new series of sanctions against the food programs that Venezuelan state has created

Come bear witness to the effects of the economic warfare and the sanctions against the Venezuelan people imposed by Donald Trump’s administration as well as the inspiring resistance to these, as Venezuelans push for food sovereignty in response to crisis. Come see the real “threat” posed by Venezuela – as living proof that another world indeed is possible. As the Venezuelan people assert, “Venezuela is not a threat – we are hope!”

Itinerary: Start and end in Caracas; visits to the states of Miranda and Aragua.

Why should we go to Venezuela?

“I have now gone twice to Venezuela on group trips  led by William Camacaro,    first in 2012 when Hugo Chavez was still alive, and from April 26th to May 5th this year. As a Venezuelan, William knows the lay of the land, where to go and is well known and  welcomed wherever he took us.

This last trip dispelled for me any of the widespread notions spread here 24/7 by the mainstream U.S. corporate media that Maduro and the Bolivarian revolution have lost popular support and that Venezuela is a country of conflict and chaos on the verge of a civil war. No doubt the blackouts, sanctions, and failed coups have taken their toll but they  have all failed in driving the population into blaming the Maduro government  for what is seen by most as the Trump- Bolton-Pompeo dirty work. The Venezuelan people are far from a demoralized population; rather they’ve been mobilized to resist !

Has Venezuela become a dictatorship ?  Not with the 2-3 major newspapers I bought every day that were anti-Maduro ( as were the anti-Chavez ones I bought on my 2012 trip),  nor with  rallies called by the U.S. backed coupsters  openly inciting violence and calling for the overthrow of the government .

We were there on April 30th, the day of the failed coup, and the next days’ Mayday rally which drew 400,000 people, compared to the opposition’s rally of  4,000. And we saw some of the reasons why the majority of the people reject the blatant U.S. attacks to overthrow the government: the 2.6 million new housing units built,  the food programs like CLAP which the U.S. is trying to destroy, health care, and other projects designed to serve the needs of the people.
Our trip also brought home how the U.S. sanctions are a form of terrorism  explicitly aimed at escalating the suffering of the Venezuelan people, 40,000 of which have died  in the last year due to the U.S. blockade on medical and other necessary life supporting supplies.
But don’t take my word for it–go to Venezuela, and see for yourself what’s going on on the ground, and judge for yourself. ”

If you are able to travel to Venezuela, go. There is really no substitute for seeing Venezuela up close. I have been involved in solidarity efforts with Venezuela since the first years of the Bolivarian revolution led by Hugo Chavez. The attempts by the US to overthrow the pro-people elected government of Chavez and now Maduro requires us all to do whatever we can to defeat the imperialist Monroe Doctrine that underlies US policy today.

I travelled to Venezuela with a group from the US and Canada at the end of April. We were in Caracas when the US engineered coup attempt utterly failed. The contrast between what the international mainstream media was reporting – that a coup had taken place – and the facts as we saw them unfold was a contrast in black and white. It was so important that we were in Venezuela to issue a statement that denounced the Trump administration for conspiring to execute the plot. Our presence was felt throughout the country as news media carried our message that day.

The following day, May Day, when the opposition promised the “mother of all demonstrations” it was heartening to see the streets of Caracas filled with supporters of the Maduro government – some estimates were that 400,000 marched in what was a victory celebration over “yankee imperialism” – while the opposition had one of its lowest turnouts ever.

I agree. To most effectively help to build a movement in the US against foreign intervention, you really should go to Venezuela.  See for yourself the accomplishments achieved so far, the resilience of the people, and the unlimited potential if allowed to breathe.

I just returned from Venezuela (my first visit), last week of April, first week of May. It was obvious to all in our group the opposition had no support for any kind of mass action of any sort. We saw many major projects built since 1999 in support of the nation’s poor masses: 2.6 million housing units, health care centres, cable cars to serve the poor living on the hillsides, sewer, water and electricity piped into those same communities. We saw self government in action, meeting to solve community needs and problems. If you are not a millionaire in Venezuela you’d have to be out of your mind to support the opposition.

The main observation I took home from this tour was Venezuela has embarked on a revolutionary program very similar to that of Cuba’s.

Also obvious to me Canada, and other members of the so-called Lima Group, do not want to see any country successfully using the national wealth to ensure all the population has a decent quality of life and equal opportunities for personal development.

Not very comforting knowing Canada is a part of this as we head into a federal election season where the 2, maybe, all 3 leading parties have the same foreign policy goals, regardless of the campaign rhetoric we are going to hear.

My last minute decision to visit Venezuela with the Bolivarian Circle of NY from April 26 to May 5, 2019 – to see for myself what is going on there – was one of the best decisions I have made. Not only did I find the humanity, ingenuity and solidarity of people everywhere we went to be inspirational; but it was incredibly moving to find that we were so warmly welcomed despite the US engineered coup attempt that took place on April 30  while we were there. There is no other way to really uncover the massive lies propagated by our media except by seeing it for yourself. And as so many Venezuelans requested, there is no better way to fight the US economic, military and media war machine than to come home and spread the truth.

Sanctions that cause hunger and kill:

Special Report: Hunger in Venezuela? A Look Beyond the Spin

Revolution, Counter Revolution, and the Economic War in Venezuela: Part I

“THE COMMUNE OR NOTHING”: POPULAR POWER AND THE STATE IN VENEZUELA

VENEZUELA AND THE BATTLE AGAINST TRANSGENIC SEEDS