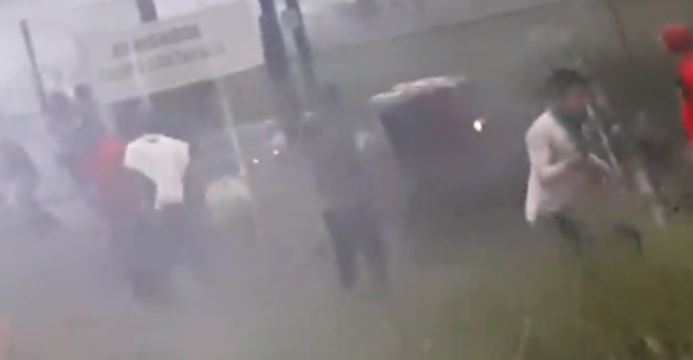 An urgent situation appears to be developing at the Costayaco oil field in Putumayo, Colombia operated by Calgary-based Gran Tierra Energy.

Corporación Viso Mutop has just tweeted this video noting: “This is the situation inside the oil well of the Canadian multinational Gran Tierra. Peasants, tired of waiting for the attention of the final government, entered that Well in Villagarzón #Putumayo.”

This video tweeted by the National Organization of the Indigenous Peoples of the Colombian Amazon (OPIAC) includes the text: “Public force attacks with shots against indigenous peoples in Villagarzon-Putumayo.”

The Association of Indigenous Councils of the Municipality of Villagarzón Putumayo (ACIMVIP) has also just stated: “We ask the Ministry of Defense, National Army, National Police and ESMAD to respect the standards of Human Rights and IHL, regarding their actions within the framework of our legitimate right to social protest; this bearing in mind that we are NOT armed actors and under no circumstances should we be treated as such.”

And Telesur reports: “The Regional Strike Committee in the Colombian department of Putumayo denounced on Monday [May 31] police aggression against demonstrators, who legitimately took Costayaco Oil Well 10 from the Canadian transnational Gran Tierra.” The Committee’s statement further notes there were “uniformed members of the National Army who were guarding the well.”

A May 27 statement by the Sub-regional Strike Committee of the Villagarzón Resistance Point included these excerpts:

“Since last May 16, the social protest moved to the Costayaco Field of GTE, demanding the immediate suspension of oil operations due to the historical environmental liabilities generated by this multinational, and in the meantime agreements are established with the national and departmental government regarding points that support our protest exercise.

Despite the fact that the Gran Tierra Energy company agreed to suspend its operations, understanding that there are substantive reasons in our claims and agreed to allow the entry of a verification commission that will ensure the effective operational suspension, so far GTE has not kept its word, since in three spaces they have refused to verify alleging alleged technical difficulties in the facilities.

We call on the directors of the company Gran Tierra Energy to comply with the agreements to suspend operations and allow the entry of the verification commission of the regional strike committee. Likewise, we make a call to the municipal, departmental and national control entities that make follow-up to our mobilization process, so that they monitor the actions of the company and provide guarantees to protesters in the area.”

There is also this May 31 statement shared by the National Indigenous Organizations of Colombia (ONIC):

May 17 statement from Gran Tierra

On May 17, Gran Tierra posted this statement on the impact of the ongoing national strike in Colombia on its operations: “As of May 16, 2021, the Costayaco field continues to produce approximately 5,100 bopd [barrels of oil per day].”

It also noted: “The Company has successfully finished its 2021 development drilling campaign of 3 new oil wells, prior to any impact from the national protests. Currently, none of these 3 wells are on production, but Gran Tierra expects to bring them all on-line by the end of the second quarter of 2021.”

And while Gran Tierra does reference the blockades in Putumayo in their statement, they noted “these blockades are not directed at Gran Tierra.”

Gran Tierra has a Beyond Compliance policy and its Human Rights Policy includes the International Labour Organization (ILO) conventions. A key ILO convention is the Indigenous and Tribal Peoples Convention, 1989 (No. 169). The company has indicated that it is committed to Prior Consultation with Indigenous Groups.

Gran Tierra Energy does not appear to have publicly commented yet on the situation that has developed today in Villagarzón.

May 31, 5:38 pm – Indigenous Nasa defender Feliciano Valencia tweeted: “Jordany Estrella, a young peasant from the la Castellana village, who participated in the demonstrations in Villagarzón, Putumayo, was assassinated. The State was cruel to the youth of the country. Enough already!”