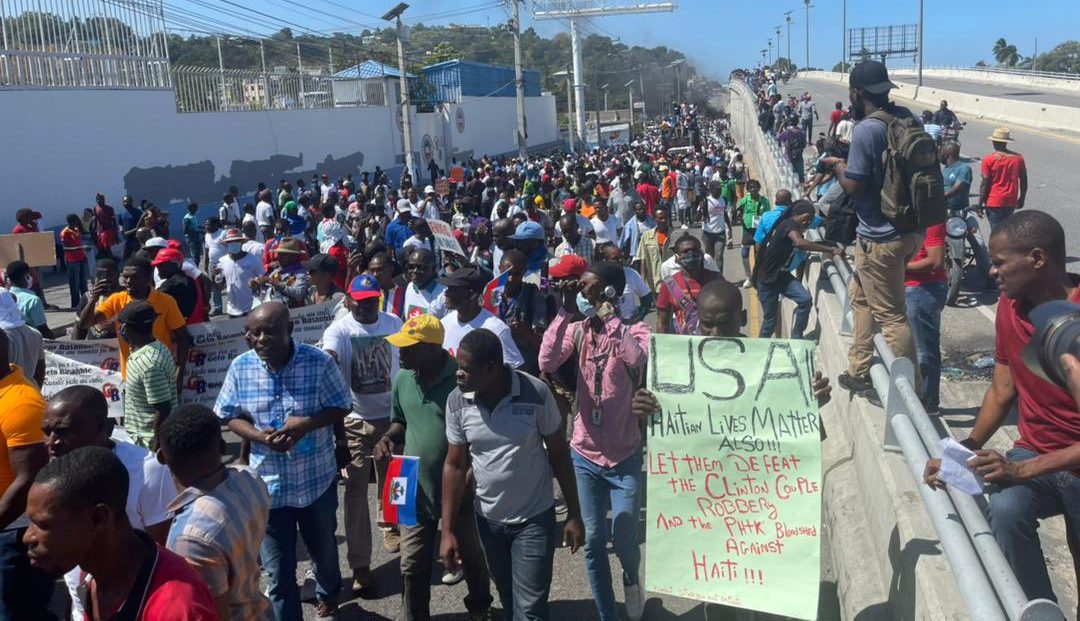 Urgent Solidarity With Haiti Is Needed

NOTE: Sign the letter calling for the United States, United Nations and the Organization of American States to stop interfering in Haiti. Click here to read and sign it.

Show your solidarity with Haiti on Sunday, Feb. 21 as they protest to demand that Jovenel Moïse step down. More information here.

A long-brewing crisis in Haiti, created through intervention by the United States, United Nations and allied western imperialist countries, has now come to a head. The Biden administration is openly backing a violent, corrupt and fraudulent leader, Jovenel Moïse, and maintaining the policies of previous presidents, including Donald Trump, in Haiti.

Activists in Haiti have reached out to the Haitian diaspora in the United States and to organizations that support respect for self-determination and human rights for their solidarity. Listen to my interview about the situation there with Haitian filmmaker and political activist Wilkenson Bruna on Clearing the FOG this week.

The crisis in Haiti will not end until sufficient pressure is placed on the United States to change its positions. As people living in the United States, that is our responsibility. We need to understand what is happening in Haiti, the roots of the crisis and how to take action. As the Black Alliance for Peace writes:

“With the election of U.S. President Joe Biden, folks believed this so-called ‘champion’ of fair elections and the rule of law—who had expressed a commitment that ‘Black Lives Matter’—would rally to the side of Haitians and end U.S. support for the dictatorship. But that did not happen.”

Today, there are protests in Haiti calling for Jovenel Moïse to step down. You can follow the protests using the hashtag #NouPapDomi (“We will not sleep.”). Take a photo of yourself holding a sign of solidarity with the people of Haiti and share it on social media to raise awareness of what is happening.

It was one week ago today that Jovenel Moïse’s term as president of Haiti ended, a presidency achieved through manipulation of the election in 2015-16 and marked by a usurpation of power. Moïse has refused to cede that power and in response to protests, has unleashed greater state violence, harassment and arrests including attacks on journalists.

Leading up to February 7, there were massive protests in Haiti calling for Moïse to respect the Haitian Constitution and step down so that a provisional government could be put in place and elections could be organized. These protests were led by a broad coalition of social movements, trade unions, and opposition political parties. The Haitian Supreme Court and Bar Association agree that Moïse’s five year term ends this year while Moïse claims he has one more year. The Biden State Department backed Moïse’s claim.

On February 7, Moïse announced that a coup was being conducted against him and ordered arrests of people who oppose him. Police raided the homes of a Supreme Court judge and the Inspector General and jailed them. The next day, Moïse fired three Supreme Court judges and police took control of the courts. He then illegally appointed three new judges. In protest, judges are launching a nationwide unlimited strike on February 15. International bodies, such as the Canadian Lawyers Without Borders, denounced Moïse’s assault on the judiciary.

Violence against people who oppose the Moïse dictatorship has been increasing and severe during his term. The “Group of 9,” basically a group of state-sanctioned gangs, have massacred people in opposition communities. Recently, both the police and the military, trained in repressive techniques by the United States, have attacked and arrested demonstrators and the media, even using live ammunition. Two journalists were shot covering protests on February 8.

On February 12, Supreme Court Judge Joseph Mécène Jean Louis publicly announced that he had been chosen by the opposition as a provisional president. He is one of the three Supreme Court judges fired by Moïse. Mécène plans to set up an interim government and call for elections.

In addition to president, there need to be electi0ns for the Parliament and municipal offices. Moïse refused to hold parliamentary elections when they were due in 2019 and dismissed most members of the legislature. He has been ruling by decree, essentially a dictatorship, since early 2020. He also dismissed mayors across the country and appointed replacements for them.

In another attack on democracy, Moïse is working with what is known as the “Core Group,” which includes the United Nations, the Organization of American States, the US, Brazil, France, Spain and the European Union, to rewrite the Haitian Constitution and grant greater powers to the executive office. Haiti has had 23 Constitutions since 1801.

The United States has had a hand in Haitian politics for a long time. In this century, it was in 2004 that the United States and its imperialist allies conducted a successful coup against President Jean-Bertrand Aristide and brought in the United Nations as an occupying force. In the short time that it was in power, the Aristide government built schools and health centers and raised the minimum wage. It also disbanded the military and started investigating accusations of state violence. Life was improving for Haitians.

Under the United Nations occupation, conditions have deteriorated. There have been massacres. UN troops have been involved in human trade and sexual exploitation and they brought cholera to the country, which has killed tens of thousands of people.

The Clintons have also played a destructive role in Haiti, both through the Clinton Foundation and Hillary Clinton’s interventions as Secretary of State under President Obama. It was the Clintons who succeeded in thwarting the will of the people in the 2010 presidential election by installing the US-backed candidate, Michel Martelly, in what was considered a “silent coup d’etat“. Millions of US dollars poured in to support Martelly’s campaign in an election that occurred after the massive earthquake of 2010 and in which the most popular party, Fanma Lavalas, of former President Aristide was banned. Only about one-fourth of registered voters participated, which is highly unusual.

In the following years, billions of dollars of aid poured into the country but there was little to show for it. Instead, deals were given to businesses owned by Clinton Foundation donors to build factories that are sweatshops. Jake Johnson outlines what followed the earthquake by the numbers. Less than one percent of the money that was pledged went to the Haitian government or to Haitian institutions or businesses. While 105,000 houses were destroyed, the Red Cross, which raised almost $500 million, only  built six houses and USAID, which pledged to build 15,000 houses, only built 900.

Jovenel Moïse, another US-puppet, came to power after Martelly’s term in a fraudulent election in 2015. His presidency was delayed by protests over that election because the people were unwilling to concede another assault on their democracy, but ultimately Moïse prevailed and was seated on February 7, 2017. Protests have continued throughout his term, especially when it was revealed that billions of dollars provided through Venezuela’s PetroCaribe program that were supposed to be used for infrastructure were missing. Now, his term has ended.

It is no surprise that the Biden administration is carrying on with the US’ bipartisan imperialist project in Haiti but now the situation is dire. Jovenel Moïse has dismantled the democratic institutions of the state and rules unilaterally with the support of the police, military and western allies. Opposition to this is being brutally repressed. We, in the United States, a country largely responsible for the devastation of Haiti, must act in response to the request for our support.

The Haiti Action Committee has an action alert with information about contacting Congress. Click here for that alert. Share the alert with your networks. Haitians are protesting today – follow and share their actions too.

Leaders of peace and Haitian solidarity organizations in the United States are planning actions in support of the self-determination of the Haitian people and in opposition to western imperialism. Demands include ending US support for Jovenel Moïse, ending US interference in Haiti’s elections, and denouncing violence and repression.

President Biden claims to care about racial injustice. He must be pressured to demonstrate that with concrete actions. The United States government must respect the people’s will in our close neighbor, Haiti. Look for more to come on this soon.