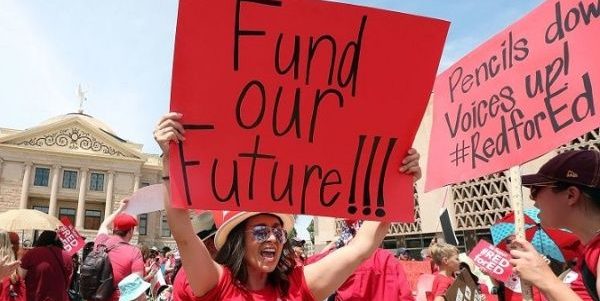 Above Photo: 2018 saw a wave of teacher strikes from West Virginia to Oklahoma and Arizona calling for better working conditions and improved resources. | Photo: Reuters

A union representing over 30,000 teachers in Los Angeles, California has threatened a massive walkout to demand higher salaries, smaller class sizes, and a moratorium on new charter schools. The strike is expected to take place Monday.

United Teachers Los Angeles (UTLA) had warned they would strike in the city’s 900 public schools Thursday if an agreement was not reached before then. On Wednesday, however, the teacher’ union delayed the walk-out after officials with the Los Angeles Unified School District said they had not been given a legally required 10-day notice of the labor action.

A judge refused to rule on the issue Wednesday, saying that the LAUSD’s court papers had been incorrectly filed.

“While we believe we would eventually win in court against all of (schools superintendent) Austin Beutner’s anti-union, high-priced attempts to stop our legal right to strike, in order for clarity and to allow members, parents, and our communities to plan, UTLA is moving the strike date to Monday, January 14,” union president Alex Caputo-Pearl stated.

They are also asking the community to support their demands, which seek to benefit teachers and students.

Beutner said that district officials were doing their best to avert a strike. “We are building support at the state level to find more resources to help our students and better support all who work in our schools,” Beutner said.

The union contends: “Los Angeles educators are fighting for every child in the city to have a safe and welcoming place for learning, and they’re fighting against the austerity measures for public schools that the Los Angeles Unified School District superintendent continues to promote, despite almost $2 billion in reserves.”

A second court hearing has been scheduled for Thursday over the notice as negotiators for the two sides met separately at the bargaining table to make another attempt at hammering out a new contract. Negotiations have dragged on since April.

The union is calling for a 6.5 percent pay raise, more librarians, counselors and nurses on campus, smaller class sizes, less testing, and a moratorium on new charter schools.

Negotiators for the Los Angeles County School District, which educates around 600,000 students, have countered with a proposed six percent salary hike with back pay and US$100 million investment to hire more staff and decrease class size.

The district has urged teachers not to strike, saying that it would hurt students who returned from winter break Monday.

In the event of a walkout, district officials have said they would be able to fully staff classes with administrators and substitute teachers.