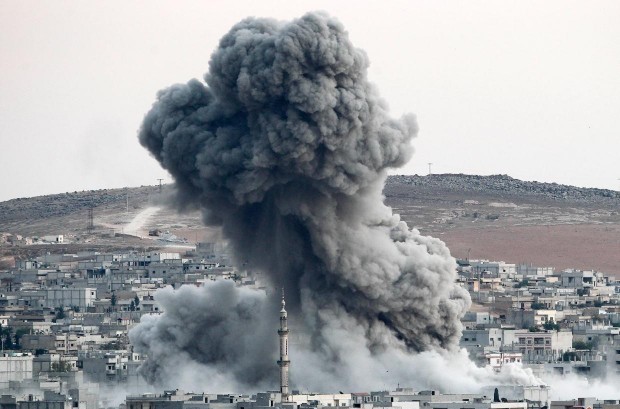 US Accused Of Scorched Earth Policy In Syria Killing Civilians

Above Photo: Human rights groups warned that the destruction was creating a humanitarian disaster AFP/Getty

“The attacking militias and the international coalition have dealt with Manbij civilians, who are estimated to be around 3,000 in number, as if they were terrorists or Isis supporters,” it added.

Allegations that two separate bombing raids killed at least 100 civilians in nearby villages in little over a week are already under investigation, but there was concern over continuing strikes supporting the predominantly Kurdish Syrian Democratic Forces (SDF).

British authorities say they have found no evidence of civilian casualties caused by British military action in Iraq or Syria, while a coalition spokesperson said forces “work very hard to… ensure the safety of non-combatants on the battlefield.”

The bombardment of Manbij has destroyed its infrastructure, with electricity and water cut off and families forced to bury their loved ones in their gardens because local cemeteries are inaccessible.

Isis is preventing civilians from leaving the city as the humanitarian situation worsens and the group’s ranks are forced into an ever-shrinking residential target zone being pounded by air strikes and shelling.

The SDF are waging a campaign to re-capture the Isis stronghold and swathes of countryside surrounding the city in hopes of choking the terrorist group’s supply routes.

The offensive has been a resounding military success, with the past two months seeing SDF rebels rapidly advance across Isis territory and surround militants in the city centre, but humanitarian groups say the cost has been high.

Raqqa is Being Slaughtered Silently has received reports of civilians allegedly being shot by SDF snipers encircling the city and homes being hit by coalition air strikes.

Activists said there were claims the SDF had been giving commanders of the US-led coalition incorrect targets and unproven local suspicions that Kurdish groups in the military alliance were attempting to exact ethnic “retaliation” against local Arabs.

The Syrian Observatory for Human Rights, a UK-based activist group, said hundreds of civilians had been killed since the Manbij offensive started in May, with tens of thousands of people displaced and many more besieged.

It has documented the death of 399 civilians in the area, including almost 100 children under the age of 18 and 50 women, and countless injuries.

Activists said 199 of those, including 52 children, 18 women and eight prisoners, were killed in air strikes by the US-led coalition on Manbij and the surrounding countryside.

American officials told The Independent some reports of collateral damage in air strikes against Isis were “not credible” but the number of alleged incidents has escalated dramatically since the start of the Manbij offensive.

In the same period, 200 civilians have been reported killed by battles between Isis and the SDF in shelling, sniper fire, machine guns and explosions.

Tens of thousands of civilians are trapped in the city centre, at risk of bombardment by the international coalition and prevented from escaping by Isis fighters and IEDs planted to slow the SDF advance.

The humanitarian situation is worsening for those who remain with food and medical supplies running out as sanitary conditions decline, the United Nations has warned.

“We understand the civilians in Manbij are in a dire position as they are trapped between the warring parties,” he said, adding that his staff had received reports of serious violations including civilians being killed and injured by air strikes, shelling and mines.

“We don’t know precisely how many civilians have been killed since the current campaign began, but we believe the number is in the dozens at least, and includes many women and children.

“Families are unable to access local cemeteries to bury their relatives who have died or been killed, and are burying them in their gardens or keeping the corpses in bunkers.

“The town has no electricity or water at present, and no medical facilities are known to be operating.”

The High Commissioner urged forces advancing on Manbij and other parts of Syria to protect trapped civilians in what he said was becoming a “gigantic, devastated graveyard.”

“The number of war crimes already committed surpasses the worst nightmares,” he added. “But it is in the power of both attacking and defending forces – and their foreign backers – to minimise further civilian casualties and avoid further crimes and atrocities. They must do so.“

There are concerns that the destruction in Manbij will leave displaced people unable to return after Isis is driven out, like in the“ghost town” of Tikrit and Iraqi city of Fallujah, as well as fuelling future resentment and disputes.

The Manbij offensive has become the key priority of the US-led coalition as pressure to stop the funding and propaganda material inspiring a wave of international terror attacks continues.

A British man, Dean Carl Evans, was killed while fighting against Isis with Kurdish forces in the city last month and was believed to be one of many foreign volunteers in the SDF’s ranks.

The region was overrun by extremists during their rapid advance across Iraq and Syria in the summer of 2014 and has since become a hub for the lucrative trade of looted artefacts and other Isis products, due to the city’s location near the Turkish border and on an intersection of major roads.

Commanders of Operation Inherent Resolve have defended their record in what Barack Obama called the “most precise air campaign in history” earlier this week.

A spokesperson at the coalition’s headquarters told The Independent formal investigations had been opened up into possible civilian casualties in strikes on 19 and 29 July.

In the first bombing, on the village of Tokhar, at least 77 civilians were reported killed as they sought safety from vicious battles on the nearby frontlines.

The SDF admitted they had provided intelligence on the target but insisted the bombs hit a group of Isis militants and denied any civilians were killed.

Amnesty International was among the groups condemning the incident, calling for a transparent investigation and plans to “to avoid further needless loss of civilian life”.

Its deputy director for the Middle East, Magdalena Mughrabi, said: “Anyone responsible for violations of international humanitarian law must be brought to justice and victims and their families should receive full reparation.”

“We’ve seen them during the fight pushing civilians toward the lines of the SDF to try to draw fire,” he added.

“While the investigative process will provide details on [the Tokhar] incident, and we don’t know what happened, I won’t be surprised if this is somehow a factor.”

It was the most deadly known incident in the US-led coalition’s campaign so far, and was followed days later by another alleged massacre in the nearby town of al-Ghandour, where at least 28 civilian deaths were recorded.

A spokesperson for Operation Inherent Resolve told The Independent that investigations had been launched into both air strikes – but not the allegations of war crimes by the SDF.

“Coalition forces work very hard to be precise in our air strikes and ensure the safety of non-combatants on the battlefield,” he added.

“Mitigating civilian casualties is a key component of the air campaign, and that is why we use precision weapons.

Officials detailed the process of nominating then reviewing a target, then assessing it as valid against available intelligence, which normally relies on a combination of allies on the ground and surveillance.

Central Command has already confirmed dozens of civilian deathsin American strikes in Syria and Iraq, including people in cars and motorbikes passing moving targets and those in the proximity to Isis fighters.

Estimates of “collateral damage” caused by the Syrian Air Force and its Russian allies are far higher – reportedly standing at almost 800 civilians in July alone, compared to 148 recorded for the US-led coalition.

The Ministry of Defence said it had found no evidence of civilian casualties caused by British military action in Iraq or Syria.

“We do an assessment after every British strike and if we had any reason to believe, either from this analysis or from other credible reports, that there might have been civilian casualties, we would conduct an investigation, in conjunction with Coalition authorities,” a spokesperson told The Independent.

American planes conduct by far the highest number of air strikes in the international coalition, followed by the UK and France in around a dozen countries are flying missions.

The RAF has been involved in several recent strikes on Manbij, sending a Reaper drone to provide air cover for the SDF on 28 and 30 July and Typhoons to destroy fortifications on the city’s outskirts on Monday.

In its latest tally of operations for Thursday, the US headquarters listed three strikes in Manbij hitting Isis tactical units, fighting positions and a command point.