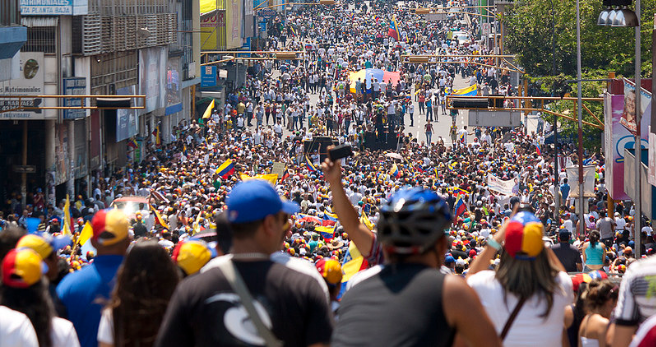 US And Allies Steal $23 Billion, Offer $60 Million In ‘Humanitarian Aid’

The first trucks carrying the so called humanitarian aid for Venezuela have arrived at the Colombian border city of Cúcuta where a standoff is taking place.

Together the European Union and the United States plan to send $60 million in aid, despite the fact that the Venezuelan government is demanding the return of more than $23 billion dollars frozen in accounts being held in the U.S., Canada and Europe that they consider stolen from their  public treasury; money that could have been spent on the necessary import of food and medicine for the benefit of the entire population.

The sending of “humanitarian aid” to Venezuela by the U.S. is being presented as an emergency and something humane and necessary to the international community, however the Bolivarian government of President Nicolás Maduro, has made it clear that if their concern was genuine they would  unblock the funds that the world’s financial system have damned up.

The self proclaimed U.S. picked, wannabe, “president in charge”, Juan Guaidó and his group in charge of carrying out a coup d’état against the administration of President Maduro would claim the “humanitarian aid”  the U.S. plans to send. Clearly this aid has nothing to do with the suffering of the Venezuelan people and everything to do with turning up the heat of the regime change strategy of Washington to undermine the democratically elected president of the country.

Maduro has also made it clear that Venezuela does not need charity and if the stolen money was returned, “Venezuela will move forward by its own means as it has always done throughout its history”.

In a press conference yesterday Maduro said, “Take all that humanitarian aid and give it to the people of Cúcuta, where there is a lot of need. This is a macabre game, you see? They squeeze us by the neck and then make us beg for crumbs. They offer us toilet paper like Trump threw at the people of Puerto Rico after Hurricane Maria.”

The economic war against Venezuela started a while back but now as the war threats escalate it is really ratcheting down.

In 2017, financial service provider Euroclear blocked nearly $1.65 billion for the purchase of medicines and food for the Venezuelan population.

Similarly, in 2018 nearly $2.5 billion were blocked, while England already in 2019 has retained $1.2 billion (in gold) and the U.S. took another $7 billion in assets from Petróleos de Venezuela (PDVSA).

Just last week the Trump administration issued sweeping sanctions against state oil company PDVSA, freezing all profits generated by Venezuela’s refining subsidiary Citgo, and has vowed to starve Maduro’s government of any and all revenue.

There are some glaring historical similarities to the situation now in Venezuela where the U.S. has used economic warfare as a weapon. It is the strategy of slow steady strangulation to bring a country standing in opposition to imperialism to its knees, like Chile in 1973 when the Nixon Administration was destabilizing the Popular Unity government of Salvador Allende and he ordered then Secretary of State Henry Kissinger, “Let’s make the Chilean economy scream.” Or who, with any conscience, could forget in 1996 after U.S. led economic sanctions had resulted in the deaths of more than 500,000 Iraqi children and Secretary of State Madeline Albright went on 60 minutes and calmly said, “..we think the price was worth it.”

The six decade long unilateral U.S. economic blockade of Cuba is another example, one that is not just historical but current as well, that so far has cost the Cuban people over $130 billion in revenue. They too have been deprived of much needed specialized medicine and food but Cuba has prevailed through determination, principle and the international solidarity that Venezuela now needs.