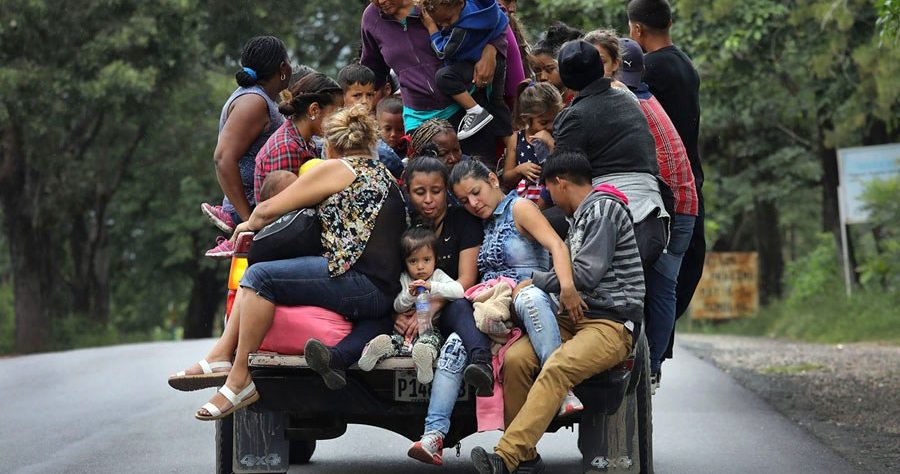 US And The Central American Exodus

The exodus of Central Americans, mainly to the United States, has been made visible by the current caravan that crosses Mexico, this is not new and is a long-standing phenomenon.In 2017, the International Organization for Migration, a UN agency, reported that 450,000 migrants, predominantly Central Americans, annually cross Mexico to the country to the North. This phenomenon began to take off in the 1980s as a result of Washington’s massive support for the armies and repressive forces of El Salvador and Guatemala in their bloody war against the liberation movements of those countries that, along with Honduras, were badly affected. The war generated, especially in El Salvador, a great flow of refugees, among them thousands of young orphans, on their way to the powerful U.S.

It was neither the first nor the last time U.S. imperialism intervened in Central American countries.  Since the beginning of the 20th century, Washington has sent the Marines dozens of times to impose their wishes on this region of our America. The heroic struggle of Augusto César Sandino and his small army against the Yankee military intervention in the first quarter of the 20th century in Nicaragua is well known. Decades later, that country and the government of the Sandinista Liberation Front would suffer a relentless and bloody aggression from the government of Ronald Reagan. A counterrevolutionary army illegally organized and armed by the United States was supplied by air from Honduras in a CIA operation known as Iran-Contras and implemented from there by terrorists of Cuban origin. The planes came loaded with weapons from the U.S. and returned with drugs to that country. At the same time, the CIA that agency created death squads that, at the cost of serious human rights violations, kept Honduran revolutionaries at bay.  In 1989, George Bush Sr. ordered the strategic invasion of Panama that cost the lives of 3,000 people.

In 2009, from the Soto Cano military base in Honduras, where the Bravo task force of the U.S. Southern Command is based, it launched the coup d’état against President Manuel Zelaya. That action has a lot to do with the events that have led to the massive migration of Central Americans fleeing their countries. Zelaya had joined the Bolivarian Alliance for the Peoples of Our Americas ( ALBA) and established a fluid relationship of cooperation with Chavista Venezuela. He got the Organization of American States  (OAS) to lift Cuba’s exclusion at a general assembly of the organization held in his country and tried to organize a constituent assembly to transfer to the Honduran people control of their national sovereignty and natural resources. None of this was tolerable for Washington, which not only ordered the coup, but did everything in its power to consolidate it. Since then, all elections in Honduras have been fraudulent, including the one that inserted current President Juan Orlando Hernandez. Zelaya, an ally of Daniel Ortega’s Nicaragua, would have been an obstacle to plans for the looting and territorial expansion through mining transnationals and ‘Special Economic Zones’.

The genesis of the current and uncontrollable migratory river of asylum seekers was the application in Central America of the neoliberal policies designed by the so-called Washington Consensus, which have become increasingly bloody and unsustainable. The peoples of Latin America and the Caribbean are being subjected to a second re-conquest and recolonization, through big business and the militarization promoted by the United States, which includes the presence of military bases in our countries. Satellite governments of imperialism offer all the facilities to transnational corporations in their expansionist plans of accelerated depredation of natural resources and super-exploitation of the labor force. All this through the dispossession of their lands and waters from indigenous communities, afro-descendants and peasants, repressed when they rebel, not only by the security forces but also, often, by so-called organized crime, which are protected and rewarded in return. Added to this is the breakdown of production chains that has led to deindustrialization and the loss of thousands of jobs.

This neoliberal aggression to the previous forms of capitalist productive organization, with the consequence of unemployment and breakdown of the social fabric is the major cause of the growing displacement and forced exodus of millions of people to the United States. A major by product of this process is the increase of the unstoppable rise of criminal organizations and the brutal violence they exert against peoples and communities, running beneath and amongst the mega-projects of neoliberalism.

Laughably Trump has accused Venezuela of financing this current wave of migration heading north but it is not in Caracas, but rather Washington where the migratory tragedy of Central America and Mexico has been brewing for some time.