Washington, DC – A legal filing submitted today by the US Attorney’s Office (USAO) indicate that the federal government has drastically reduced the scope of the prosecution of people mass arrested during Donald Trump’s presidential inauguration on January 20 , 2017 (J20). The government will no longer bring charges against 129 of the almost 200 people previously indicted based on their presence at an ‘anti-capitalist and anti-fascist’ march that was violently herded into a police trap. 59 people still have trial dates scattered throughout this year and face charges carrying up to 60 years in prison.

The motion filed by Assistant US Attorney Jennifer Kerkhoff claims that the smaller remaining group of defendants still face charges due to their alleged involvement in “identifiable acts of destruction, violence, or other assaultive conduct.”

The superseding indictment behind the case contains little to no particularized evidence against named defendants, and instead asserts collective guilt based on black clothing, anti-capitalist chants, and the fact that the protest march was “moving as a group.”

This claim of collective guilt was contested by defendant Elizabeth Lagesse, who said she was “a little bit confused that i’m still on the list. I don’t fit any of the criteria that they listed and I have absolutely no idea what their justification is.”

Last month, defense counsel submitted a motion alleging that a police detective (Detective Greggory Pemerberton) lied to a grand jury in order to secure an indictment against everyone mass arrested at the anti-Trump protest. Detective Greggory Pemberton has a history of making social media posts attacking protesters and the media. Before the 2016 election, he told a right-wing media outlet he hoped Donald Trump would “put a stop to” protesters who criticize police.

“Those 129 cases should have been dismissed a year ago, but we are very excited that the Government recognized that it was logically impossible for 217 defendants to have done the exact same conduct,” defense attorney Mark Goldstone told Buzzfeed News.

The first J20 trial saw prosecutors introduce video from the alt-right fake news outlet Project Veritas, who has a proven track record of falsifying evidence, in an attempt to portray an organizing meeting for anti-Trump protests as a criminal conspiracy.

Local DC organizer Dylan Petrophilos, who was not physically present during the protest events mentioned in the indictment, is among those still facing felony charges. Based on court proceedings thus far, the US Attorney’s decision to target Petrophilos seems to be based on a Project Veritas video and his appearance on a podcast to promote inauguration protests.

The DC Metropolitan Police Department (MPD) is facing a recently expanded ACLU lawsuit filed on behalf several people physically and sexually abused by police on inauguration day. MPD Commander Keith Deville, who ordered the mass arrest, admitted under oath last month that he believed “convictions in the case would limit our civil liability in the matter.”

Betty Rothstein of Defend J20 Resistance, a group organizing support for the defendants, told Unicorn Riot that supporters will continue to closely monitor the case:

“The fight isn’t over for the remaining 59 defendants, so now more than ever it’s important to support them, as the government will be going even harder after this smaller group. But the fact that 129 defendants had their cases dropped also goes to show just how these charges are a politically motivated scare tactic. We’re committed to fighting each and every last charge until every single defendant is free.” – Betty Rothstein, Defend J20 Resistance

On Friday, January 19, a status hearing will be held to determine the trial date for the second group of defendants. The third and fourth trials trials are scheduled for March 5 and March 29. The remaining cases will be held in the courtroom of District of Columbia Superior Court Chief Judge Robert Morin, who had jurisdiction over previous legal battles in which the Trump’s Department of Justice fought to gain access to Facebook and Dreamhost data containing personal information of protesters, journalists, and others arrested at a protest during Trump’s inauguration. Morin reportedly is taking the caseload from Judge Lynn Leibovitz, who presided over the first trial, due to scheduling issues.

Read the new court filing below: 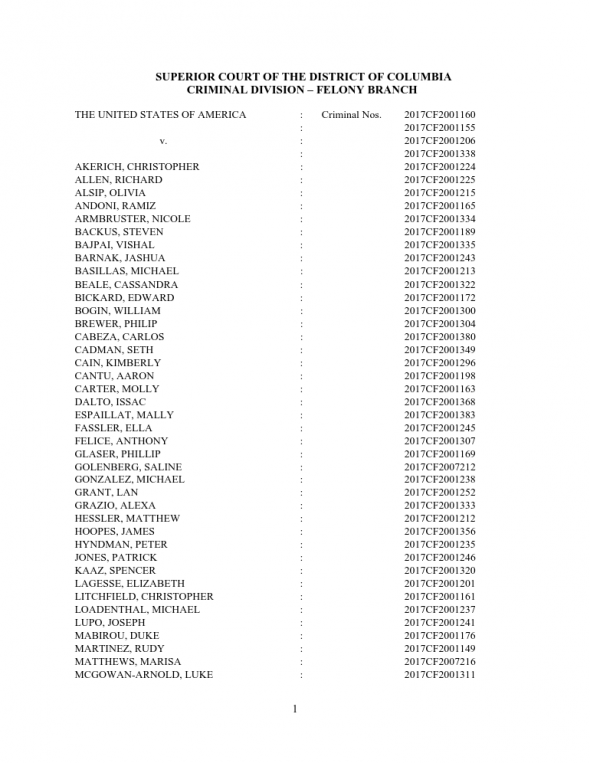