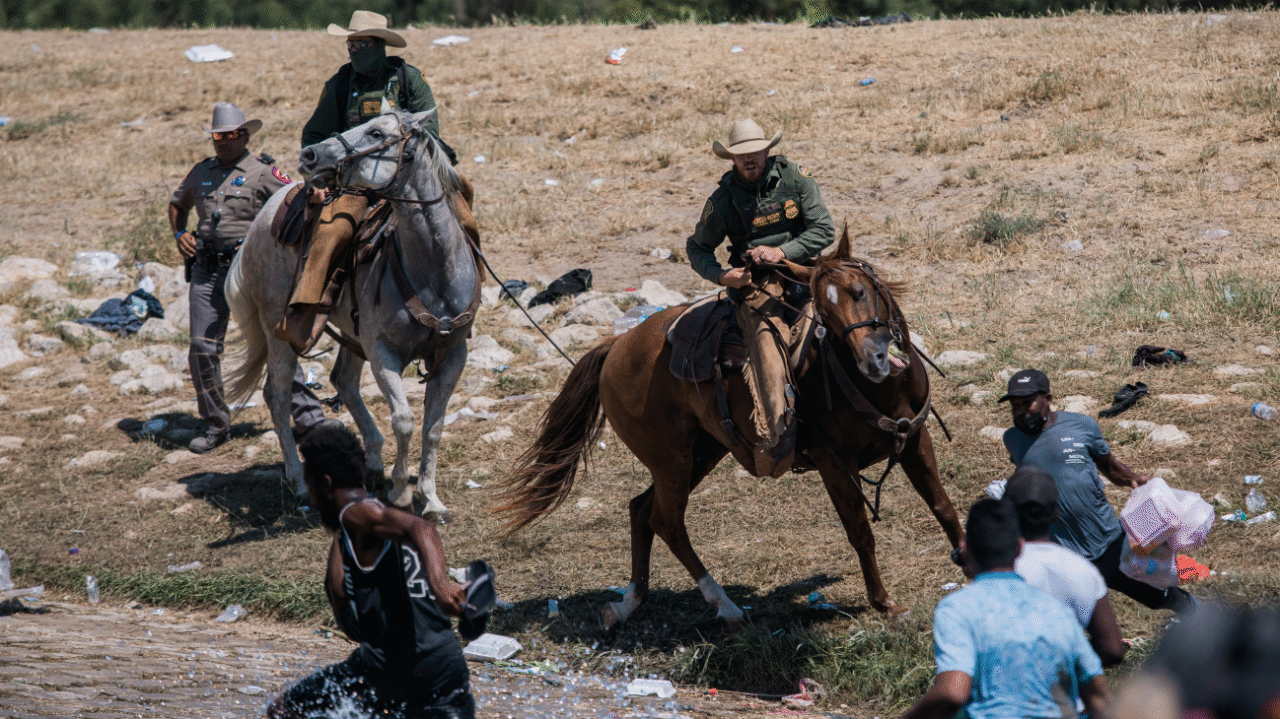 Video footage and photographic images of US Border Patrol agents herding Haitian migrants as though they were cattle triggered widespread revulsion across the United States and internationally Monday.

The footage, taken by photographers for the Associated Press, Reuters and AFP, showed the crackdown ordered by the Biden administration against more than 10,000 Haitian migrants who have gathered under a freeway underpass on the outskirts of Del Rio, Texas, a border town 145 miles west of San Antonio.

Several reporters described the actions of Border Patrol agents mounted on horseback as using the reins of their horses to threaten migrants who had waded across the Rio Grande—which is exceptionally low at this point. The El Paso Times reported Monday that an agent ”swung his whip menacingly, charging his horse toward the men in the river.”

The refugees assembled in a makeshift camp under the freeway bridge on the US side of the river have been crossing back into Mexico to get food and other supplies, rather than risk crossing through lines set up on the US side of the camp by the Border Patrol and Texas state police, who would arrest them and ship them off for immediate deportation.

Border Patrol agents began riding on horseback along the river in order to cut off those, mostly men, who have gone back to Mexico for supplies, and prevent them from rejoining their families. In some cases, desperate migrants dropped the food and water they were carrying on their heads into the river, in order to make a dash for the US side.

The Border Patrol began mass deportations of the Haitians on Sunday, taking 3,300 migrants into custody and sending more than 400 back to Port-au-Prince, Haiti’s capital. The remainder of this group were divided between El Paso and San Antonio, to await imminent deportation with flights set to continue from both cities to Haiti.

Acting Border Patrol chief Raul Ortiz said all the Haitians remaining in Del Rio would be removed by the end of the week. “Over the next 6 to 7 days our goal is to process the 12,662 migrants that we have underneath that bridge as quickly as we possibly can,” he said. “What we want to make sure is that we deter the migrants from coming into the region so we can manage the folks that are under the bridge at this point.”

Flights to Haiti will be ramped up to a total of seven a day, four to Port-au-Prince and three to Cap-Haïtien, the largest city in the north of Haiti, giving the airlift a capacity of about a thousand people a day. Other refugees are to be deported to Mexico and Central America.

The images of border agents herding Haitian migrants were only the most overt expression of a US government policy that is savage in every aspect. Secretary of Homeland Security Alejandro Mayorkas, whose agency controls the Border Patrol, arrived in Del Rio Monday to oversee the mass repression, accompanied by a small army of 600 additional agents.

In a press briefing in the border city, he reiterated the Biden administration’s position that the migrants would not be allowed to file for asylum, which is their right under international law. Instead, they would be rounded up and immediately deported under Title 42, a legal provision that allows the Centers for Disease Control and Prevention (CDC) to declare a public health exception—the coronavirus pandemic—to justify emergency action.

Title 42 was initially invoked by the Trump administration as part of its all-sided war of repression against migrants attempting to cross the US–Mexico border. Biden made a pretense of criticizing this savage policy during the presidential election campaign, but has embarked on a policy that is no less brutal and anti-democratic.

After a federal judge issued an order September 16 barring the use of Title 42, the administration immediately announced it would appeal. In the meantime, given a 14-day stay of the order by the judge himself, the Biden administration is moving rapidly to deport all the Haitian migrants during that two-week window.

Most of the thousands of Haitians at Del Rio are not recent immigrants from Haiti. They fled in 2010 after the massive earthquake that killed more than 200,000 people and left much of the country in ruins, migrating to Brazil, Chile and other parts of South America in search of economic and physical survival.

As a result, many, perhaps a majority of those being shipped back to Haiti, have little knowledge of the “home” country to which they are being forcibly returned. Most of the children were born or grew up in South America, and are more fluent in Spanish or Portuguese than in Haitian Creole or French.

The older migrants have not been back to the country of their birth since 2010. But they know Haiti remains the poorest country in the western hemisphere, ravaged by recent hurricanes and a second major earthquake, as well as rampant political violence culminating in the recent assassination of President Jovenel Moïse. The economic downturn and coronavirus pandemic have led them to seek to enter the United States, where many have family members or hope to find work and safety.

The Biden administration regards the brutality on the border as a public relations problem to be managed by its spin doctors. Thus, White House press secretary Jen Psaki said Monday that the images of the Border Patrol agent herding migrants through the river were “horrible to watch. I don’t think anyone seeing that footage would think it was acceptable or appropriate.”

The violence is, however, in pursuit of the policies decreed by the White House. The US government closed the border at Del Rio on Sunday, and the Border Patrol agents were acting to enforce that closure.

For all the phony handwringing in front of the national media, there will be no change in policy toward the migrants, or any diminution in the everyday violence by the Border Patrol thugs, who only a few months ago gave their full-throated support to Trump, who appeared regularly at Border Patrol functions to applaud their most ruthless actions, and was endorsed for reelection by their union.

The conditions within the Del Rio camp are appalling. Several pregnant women are trapped there, and at least one gave birth at the site, was taken to a hospital in Del Rio and then returned with her newborn infant to the camp. Reporters saw one woman collapse within sight of National Guard troops—deployed at Del Rio to reinforce the Border Patrol—and troops “slowly approached and carried her away.”

The temperature in Del Rio hit 105 degrees Fahrenheit Monday, falling only to 100 degrees by nightfall, with a low temperature of only 80 overnight, putting many of those trapped there in danger of heat stroke.