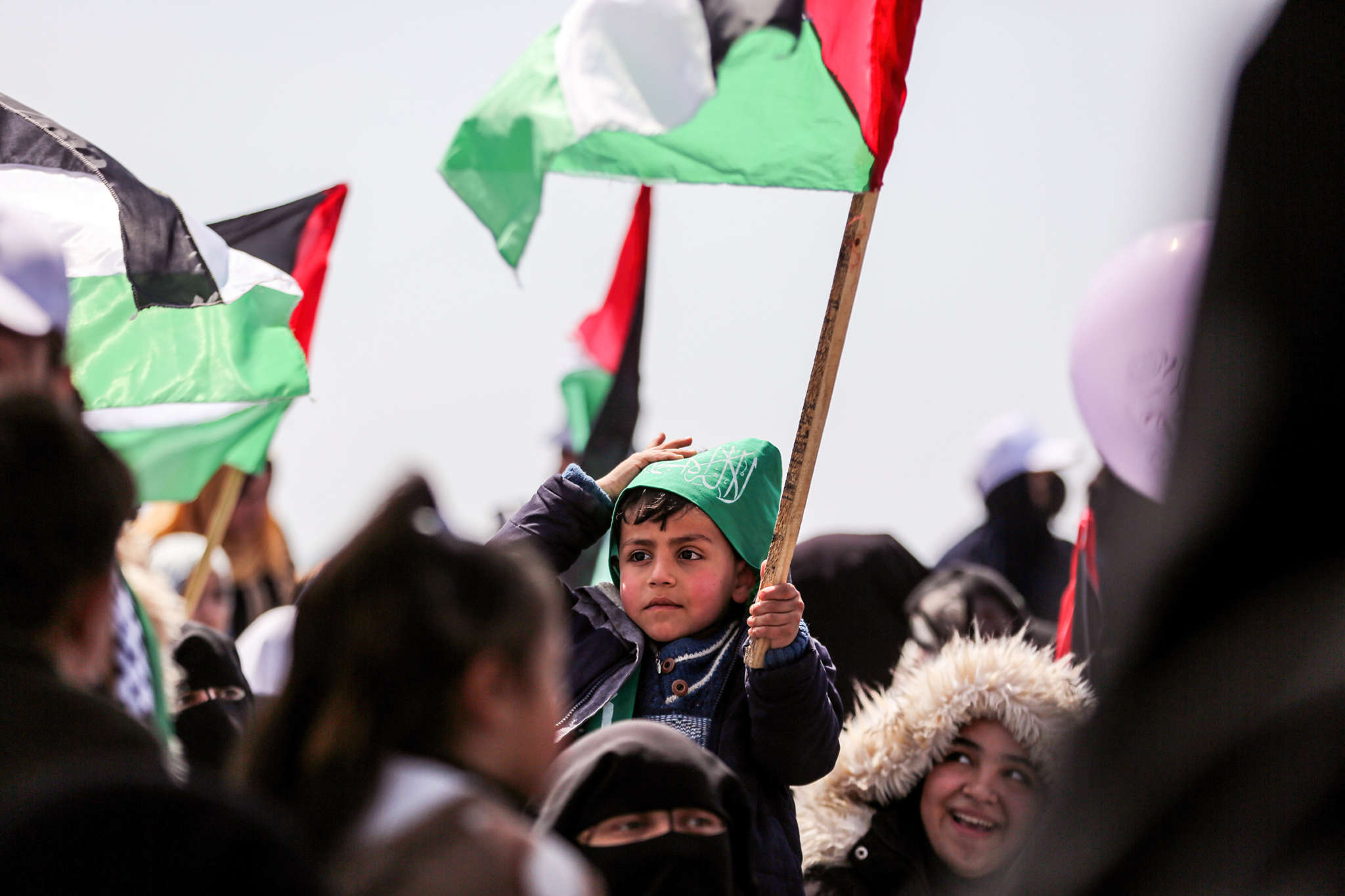 US Charitable Donations Are Funding Displacement Of Palestinians

Above Photo: A child holds a Palestinian flag during a rally to commemorate the 46th Palestinian Land Day anniversary in Gaza City. Land Day marks an incident in 1976 when Israeli troops shot and killed six people during protests against land confiscations. Yousef Masoud / SOPA Images/LightRocket Via Getty Images.

Several gunshot bangs pierced the sky. Israeli soldiers shot a Palestinian protester with live ammunition. Chants and cheers from Israeli settlers from Modi’in Illit rang out through the air as they stood upon a mound of dirt overlooking the Israeli apartheid wall. Israeli soldiers fired multiple rounds of tear gas into the crowds. As protesters scattered to evade the gas and live fire, young volunteer Palestinian paramedics darted through the tear gas to quickly grab and attend to the injured. That five minutes of Palestinian nonviolent resistance on April 1, 2022, captured the essence of Land Day: Despite facing the heavy hand of the Israeli military, Palestinian protesters and international solidarity activists refused to leave their land.

It’s been 46 years since Land Day, a day when Palestinians organized en masse against the Israeli government’s program of colonization and Indigenous erasure. On March 30, 1976, Palestinians took to their ancestral lands as an act of sumud, of steadfastness, organizing a general strike and protest marches in response to the Israeli government’s decision to confiscate another 20,000 dunams (about 5,000 acres) of Palestinian land in the Galilee. The Israeli state had already taken some 75,000 dunums from the Indigenous communities the previous decade.

Every year since then, many of us have taken time at the end of March to remember the lives of the Palestinian protesters that Israel killed that day: Khair Muhammad Yasin from Arrabeh; Raja Hussein Abu Riya, Khader Abd Khalaila and Khadija Shuwahna from Sakhnin; Muhsin Yusuf Taha from Kafr Kana and Rafat Zuhairi from Nur Shams.

In the Palestinian village of Bil’in, our community honors Land Day and our own family members who resisted Israel’s attempt to take our lands — Bassem Abu Rahma, Islam Bornat and Jawaher Abu Rahma — who were all murdered by Israeli forces.

Land Day has always been a point of national unity, bringing together Palestinians on both sides of the Green Line to resist Israeli colonization. Back in 1976, when the first Land Day occurred, Palestinians understood full well that the land grab by the Israeli government served several purposes. First, the intent was to expand the Jewish-only settlement of Carmiel in the north as a tactic to limit the natural growth of Palestinian towns. Israel’s planning regime has always operated on the premise that by taking away the lands of the surrounding Palestinian villages, the communities would have nowhere left to build — that those families would eventually leave for a life outside of historic Palestine.

Today, it is easy to see this tactic play out over and over again, whether in the expansions of the Har Homa, Gilo and Efrat settlements that sealed in and cut off Bethlehem, or in the building up of the settlements in the Jordan Valley to push Palestinians into ethnic enclaves. For our community of Bil’in, a community of fewer than 3,000 people, Israel has used myriad colonial tactics to take over our land to expand the Modi’in and surrounding outposts. Secondly, taking the land not only restricted the geographical area, but it also transferred material wealth from the local communities to the settlers that came from abroad. This took away millions and millions of dollars of generational wealth that would have otherwise been passed down from generation to generation.

So for the communities of northern Palestine calling for mass mobilization to preserve their lands — Sakhnin, Arrabeh, Deir Hanna, and others — their future was paramount. Like Palestinians have been doing for generations, they took to the streets knowing that they would face the heavy-handed violence of the Israeli state — and that some would likely pay for their resistance to colonial violence with their lives.

As Palestinians made this call to resist, leaders within the Israeli government and significant figures of the Israeli public made demands to “crush” our resolve. On March 28, 1976, the Israeli Minister of Police Shlomo Hillel declared that officers were “ready to break the Arab villages.” Israeli newspapers attempted to delegitimize the resistance, called it “a Moscow-led operation to destroy the state.” Others branded it as a violent, racist movement. Then-Minister of Education Zevulun Hammer described Palestinians “as being a cancer unto the land” — land that had always belonged to Palestinians. With Israel’s general public calling for open violence against these Palestinian communities, days before the protest was even to be held, Israel sent a heavy military presence to the villages, including armored cars. Every Palestinian knew that attending the protest was risking their lives. Not only were they facing physical assaults from the Israeli forces, they were also facing the financial risk of consequences by their Israeli employers for standing up for their own basic human rights.

In Bil’in, we have continued this tradition of steadfast resistance to colonization. Starting in 2005, residents of the community have organized weekly protests against the construction of the apartheid wall and Israeli land theft, literally putting our bodies on the line to defend our lands and illustrate the depth to which we are dedicated to Palestinian rights and self-determination. We have continued on despite the massive personal losses we have endured, including the deaths of our friends and family members, as a result of the violence we face in taking this public stand against Israeli settler-colonialism. We know that without being willing to risk sacrifices of time, energy, resources, and even our bodies and lives, we will not be able to protect — let alone decolonize — an inch of our land.

We have initiated the Campaign to Defund Racism in honor of this tradition, and in light of the vital need to address the structures that allow Israeli settlement to continue. This campaign seeks to stop the exploitation of U.S. charitable status to fund the Israeli settler movement. The campaign addresses the financing of Israeli settler-colonialism, and responds to the decades-long battle to protect our lands and resources from the Galilee to Sheikh Jarrah to Bil’in to the Naqab. As settler organizations coordinate the theft of church properties in Jerusalem and build pressure on the state to displace Naqab Bedouins, we need our allies to take a proactive approach to change the laws in their communities to support our struggle on the ground.

These settler organizations — the Israel Land Fund, Ateret Cohanim, Regavim, and others — are the organizations that use hundreds of millions of dollars to shape Israel’s program of Indigenous displacement. Look at Regavim, which is using U.S. charitable dollars to evict the community of Khan Ahmar. Ateret Cohanim is taking over the Petra Hotel at the Jaffa Gate. Deputy Mayor of Jerusalem and founder of the Israeli Land Fund, Arieh King, targets the families of Sheikh Jarrah.

The Palestinians who are most at risk are calling on U.S. attorneys general to enforce the policies guiding charitable funding, cutting off the material resources of the settler organizations that are systematically and discriminatorily targeting our families for displacement. As Palestinians continue to sacrifice their livelihoods and risk their lives to protest and challenge Israel’s system of apartheid and settler colonialism, we are calling on people of conscience in the United States to stand in solidarity with vulnerable Palestinian communities. U.S. residents can join us in calling on their local representatives and elected officials, demanding that they take action to ensure that U.S. charitable donations are not financing ethnic cleansing and forced displacement.