US – China Spat Over Quarantine And Consulates

Above photo: The US Consulate in Chengdu, the capital of Sichuan province. The New York Times.

UPDATE: From Moon of Alabama –

China responded to the U.S. order to close its consulate in Houston with a mirror order to shut down the U.S. consulate in Chengdu. But notice how different the purposes of those outlets gets described:

As the United States lashed out against the “new tyranny” of China, Beijing on Friday ordered the closure of the American consulate in Chengdu, a retaliatory move that threatens to drive the two powers into an even deeper divide.Beijing blamed the Trump administration for the deterioration in relations, calling its own action justified after Washington told China this week to shutter its consulate in Houston and accused its diplomats of acting illegally.
…
[T]he Trump administration has said the closure of the Houston consulate was necessary because it had become a hub of illegal spying and influence operations, allegations that Chinese officials have denied.
…
[T]he closure of the consulate in Chengdu, in Sichuan Province, the westernmost of the five American consulates in mainland China, deprives the United States in a city that is a hub for China’s commercial expansion across Central Asia. Chengdu is also its most valuable diplomatic outpost for gathering information on Xinjiang and Tibet, the two sometimes-restive regions in China’s far west.

Both regions have been the locations for wide-ranging security crackdowns that have drawn international criticism as abuses of human rights.

The Chinese consulate in Houston is accused, without any evidence, of being a “hub of illegal spying and influence operations”. The U.S. consulate in Chengdu is, according to the New York Times, involved in “gathering information on Xinjiang and Tibet” and also used for the fake “human rights” campaigns against China – i.e. CIA information operations. Why is the chosen depiction so different?

Some U.S. diplomats who had evacuated in January and February are now returning to China:

Washington and Beijing have been negotiating for weeks over the terms of how to send U.S. diplomats back amid disagreement over COVID-19 testing and quarantine procedures, as well as frequency of flights and how many each can carry.There is no word yet how the testing and quarantining of these diplomats will be handled. I find it likely that China has stuck to its demands and that the U.S. conceded on the issue. That would of course be another issue the media would not want you to know.

On Tuesday the U.S. government ordered the closure of the Chinese consulate in Houston, Texas. The move comes amongst a slew of factless accusations of Chinese hacking and surveillance.

While Trump, like Biden, is using anti-China propaganda as part of his campaign, the closure of the Houston consulate has nothing to do with it. But U.S. media fail to mention the real and unreasonable motive behind this move:

The United States ordered China to close its diplomatic consulate in Houston within 72 hours, dealing another blow to the rapidly deteriorating relations between the two countries. China promptly vowed to retaliate, calling the move illegal.The State Department said the closure was made in response to repeated Chinese violations of American sovereignty, including “massive illegal spying and influence operations.”

The unmentioned reason for the State Department’s move is a squabble over virus testing and quarantining of U.S. diplomats who are supposed to return to China.

In January, when the first outbreak of Covid-19 happened in the Chinese city of Wuhan the U.S. evacuated its consulate in the city. In total some 1,300 diplomats and their family members were moved out of China in January and February.

In June, after China had defeated the outbreak, the U.S. announced that that it diplomats would return:

U.S. ambassador to China, Terry Branstad, “intends to resume operations in Wuhan in the near future”, Frank Whitaker, minister counselor for Public Affairs at the embassy, said in an email to Reuters, without giving a specific date.

But by then the U.S. had become Cootiestan while China had defeated the virus. Chinese public health officials insisted on testing and quarantining everyone who entered from the U.S. to protect their country from another outbreak.

The State Department however rejected that:

The United States has postponed flights for dozens of American diplomats who had planned to return to China later this month, after failing to reach agreement with Beijing over issues including COVID-19 testing and quarantine.
…
In a previously unreported June 30 email, Terry Branstad, the U.S. ambassador to China, told the mission staff that two charter flights for diplomats returning to Shanghai and Tianjin planned for July 8 and July 10 respectively had been scrapped and would be rescheduled.“Protecting the health and safety of our community remains our guiding principle and our top priority in this unprecedented situation,” Branstad wrote. “This means that flight plans will not be confirmed until we have reached an agreement that meets these goals.”
…
A spokesperson for China’s Ministry of Foreign Affairs said there had been close communication regarding the return of U.S. diplomats to China.

“The virus is still spreading overseas and China continues to be under a fair amount of pressure to prevent the import of cases from overseas,” the spokesperson said in fax response to Reuters’ questions.

“The epidemic control measures for the diplomatic corps in China are applied equally across the board. China strives to preserve its hard-won achievement in countering the virus together with the diplomatic corps, and to provide good conditions and a good living environment for everyone to work and live in China.”

I have found no U.S. media which reported on this diplomatic conflict. Only Reuters and Asia Times noted it.

China’s request to test and to quarantine for fourteen days everyone who is coming from abroad is not unreasonable. New York, New Jersey and Connecticut demand similar for people coming from Florida and Texas. China has already had an expensive second outbreak with several hundred of cases in Beijing that was traced back to a visitor from abroad. It does not want another one.

The U.S. says that its diplomats are immune under the Vienna Conventions. But Chinese officials claim that the virus is not a party of those agreements. They insist that legal and disease immunity are not the same:

While Beijing agrees that US envoys and emissaries should retain their diplomatic immunity, China’s public health authority insists no one is immune to the highly contagious novel coronavirus, and that the nation must not expose itself to the risk of returning Americans infecting the local population.
…
Chinese Foreign Ministry spokesperson Zhao Lijian said on Thursday that Beijing would accord courteous and equitable treatment to all foreign representatives. He also revealed that his ministry had already “fast-tracked procedures” and helped a “plane load” of US diplomats to return to China at the end of May, without confirming if they had all been quarantined upon arrival.On his Weibo account, Zhao also took a swipe at Washington’s call for China to be more hospitable, saying if US President Donald Trump wants Americans to feel more welcome elsewhere, he should “make America well again,” alluding to the alarming resurgence of the respiratory disease across the country.

But other posts on Weibo noted that when the first batch of about 60 US diplomats flew into Tianjin at the end of May, they were immediately flanked by more than 150 paramedics in hazmat gear, who whisked them to a fully-enclosed facility on the tarmac to collect their saliva samples. These Americans then spent more hours than their flight to China waiting in a partitioned lounge before Chinese doctors could given them a clean slate and allow them to leave.

The BBC falsely claimed that the Houston consulate was ordered to close because of a fire: 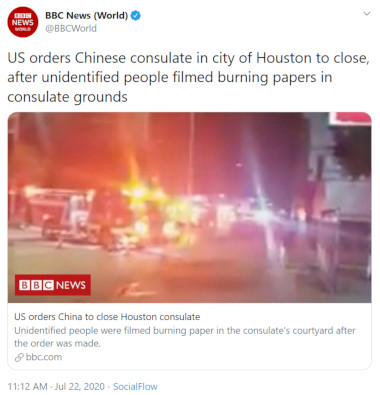 That however turns cause and effect around. The consulate in Houston started to burn its confidential papers after it was informed that it had to close within 72 hours:

The consulate was informed of the decision Tuesday, Chinese foreign ministry spokesperson Wang Wenbin said, calling it “an outrageous and unjustified move that will sabotage relations between the two countries.”
…
KHOU-TV reports authorities responded to reports of a fire at the Chinese Consulate. Witnesses said people were burning paper in what appeared to be trash cans, the Houston Chronicle reported, citing police.
…
Houston police said in a tweet that officers responded to “a meet the firefighter” call at the Chinese Consulate building at 3417 Montrose Blvd. The tweet said smoke was observed in an outdoor courtyard area, and that officers were not allowed to enter the building.

The real motive for the consulate closure can be discerned from the State Department’s coded statement:

The U.S., in a brief statement, did not provide any details on why the consulate in Texas was targeted.”The United States will not tolerate (China’s) violations of our sovereignty and intimidation of our people, just as we have not tolerated (its) unfair trade practices, theft of American jobs, and other egregious behavior,” said the statement, which was attributed to State Department spokesperson Morgan Ortagus.

The “violations of our sovereignty and intimidation of our people” are an obvious reference to the Chinese demands towards arriving diplomats.

In a tit for tat reaction the Chinese government is likely to permanently close the U.S. consulate in Wuhan:

Late on Tuesday in Houston, media reported that documents had been burned in a courtyard at the consulate. Chinese Foreign Ministry spokesman Wang Wenbin said the consulate was operating normally, declining to comment further on those reports.
…
“We urge the U.S. to immediately revoke this erroneous decision. Should it insist on going down this wrong path, China will react with firm countermeasures.”
…
A source with direct knowledge of the matter said China was considering closing the U.S. consulate in Wuhan, where the State Department withdrew staff and their families early this year amid the coronavirus outbreak that first emerged in the central city.

Closing the consulate in Wuhan will of course solve the problem for the U.S. diplomats who left Wuhan during the January outbreak and now expect to be allowed to return without being tested.

That all U.S. media which I have read on the issue have failed to mention the diplomatic spat about testing should be of concern.

But it of course relieves them from explaining the unreasonable behavior of the State Department which demands that its cooties infested diplomats can return to China without taking the necessary precautions.