US Citizen Detained, Interrogated By DHS About Anti-War Movement For Venezuela Solidarity

By Max Blumenthal, The Grayzone
February 4, 2020
| Educate!
US Citizen Detained, Interrogated By DHS About Anti-War Movement For Venezuela Solidarity2020-02-042020-02-04https://popularresistance-uploads.s3.amazonaws.com/uploads/2017/12/popres-shorter.pngPopularResistance.Orghttps://popularresistance-uploads.s3.amazonaws.com/uploads/2020/02/dhs-agents-in-dc-airport-e1580872692178.jpg200px200px

A US citizen who participated in the Venezuelan Embassy Protection Collective was detained, searched and interrogated for the second time by US government agents about his political beliefs and participation in the anti-war movement.

On his way back from a Christmas visit to his family in Nicaragua, 31-year-old US citizen Sergio Lazo Torrez was detained by Customs and Border Patrol (CBP) officers at Fort Lauderdale International Airport on January 20, then interrogated by Department of Homeland Security (DHS) agents who grilled him about his involvement in the US anti-war movement.

Torrez was a participant in the Venezuela Embassy Protection Collective, a group of activists and journalists formed in April 2019 to defend Venezuela’s embassy in Washington DC against a takeover attempt by the Trump-backed coup administration of Juan Guaido.

As The Grayzone reported, Torrez was previously detained by CBP at Dulles International Airport on August 2 after returning from a solidarity trip to Venezuela with fellow members of the collective, including this reporter. There, he was questioned for several hours about his activities in Caracas and was forced to surrender his cellphone for a search.

Torrez described the January 20 interrogation as longer and more intrusive than the last one. “They made me feel powerless because you can’t defend yourself and they can do whatever they want,” he told The Grayzone. “Even though I’m a US citizen, they told me that every time I come back to the country, I’m going to be forced to go through the same thing.” 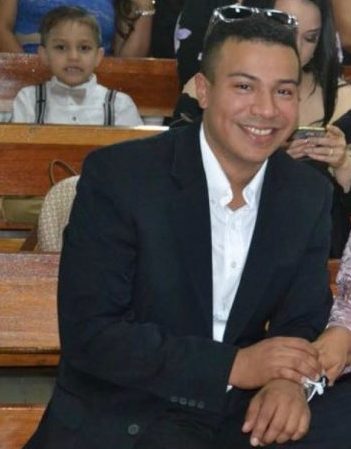 Sergio Lazo Torrez, a 31-year-old US citizen, has been interrogated twice by US officials about his political beliefs and anti-war activism

As soon as Torrez arrived at the customs desk in Fort Lauderdale, he was taken aside and escorted into a windowless room. Two DHS agents in plainclothes entered and proceeded to interrogate him.

They immediately probed his connections to the anti-war movement in the US, focusing in on Code Pink and International Answer, and demanding names of friends in the two organizations.

Code Pink and Answer helped organize last year’s defense of the Venezuelan embassy in Washington, and participated in the solidarity trip that August which culminated with a meeting with Venezuela’s elected president, Nicolas Maduro.

According to Torrez, the DHS agents demanded to know who paid for the trip to Venezuela, and what was discussed at the Foro Sao Paolo the Embassy Protection Collective participated in. The Foro Sao Paulo is an annual gathering of leftist political forces in Latin America that was established by the Workers Party of former Brazilian President Lula Da Silva. Right-wing politicians like Sen. Marco Rubio have cast the forum in a conspiratorial light, painting it as an avenue for Cuban communist infiltration of the continent.

Next, the DHS agents asked if anyone Torrez had traveled with had given money or gifts to Venezuelan officials. He said they had not. Venezuela is currently the target of a draconian US sanctions regime that forbids virtually all business transactions between US citizens and the country’s government.

At this point, Torrez said he asked what he did wrong, protesting that he had already been asked similar questions during his interrogation last August. The officer insisted that he was conducting the kind of routine security check his agency employs to track down Americans who travel to Turkey and return with bags full of ISIS propaganda.

Torrez explained that he was in Nicaragua simply to celebrate Christmas and New Year’s with his family. He then challenged the agent: “Do I look like a terrorist? Most of the people doing terrorism in the US are white guys doing mass shootings.”

At this point, the DHS agents seized Torrez’s phone and began rifling through his photos. They found one of a Nicaraguan man wearing a t-shirt that read, “Fuck Trump.” This prompted them to ask Torrez, a naturalized US citizen, about his views of Trump and the US government. He refused to comment.

After nearly four hours of interrogation and confinement, Torrez was let go. On his way out, DHS officers handed him a card directing him to a hotline for travelers who are subjected to frequent secondary screenings. They told him he can expect to be interrogated each time he returns to the US from a trip abroad.

“It’s just ridiculous being harassed for having a different political opinion and not agreeing with the international politics of this country or how this country thinks it can control the politics in Latin America and decide policy wherever it wants,” Torrez reflected.

“They think this harassment is a way to stop us from doing our activism, but it just gives us more energy to keep going,” he continued. “It’s just adrenaline for us.”

Four members of the Embassy Protection Collective are currently on trial for trespassing and interfering with the US State Department’s functions. Kevin Zeese, Margaret Flowers, Adrienne Pine and David Paul face federal charges punishable by up to a year in prison, a $100,000 fine each, and restitution to the government for police time and damages if they are convicted.

Max Blumenthal is an award-winning journalist and the author of several books, including best-selling Republican Gomorrah, Goliath, The Fifty One Day War, and The Management of Savagery. He has produced print articles for an array of publications, many video reports, and several documentaries, including Killing Gaza. Blumenthal founded The Grayzone in 2015 to shine a journalistic light on America’s state of perpetual war and its dangerous domestic repercussions.