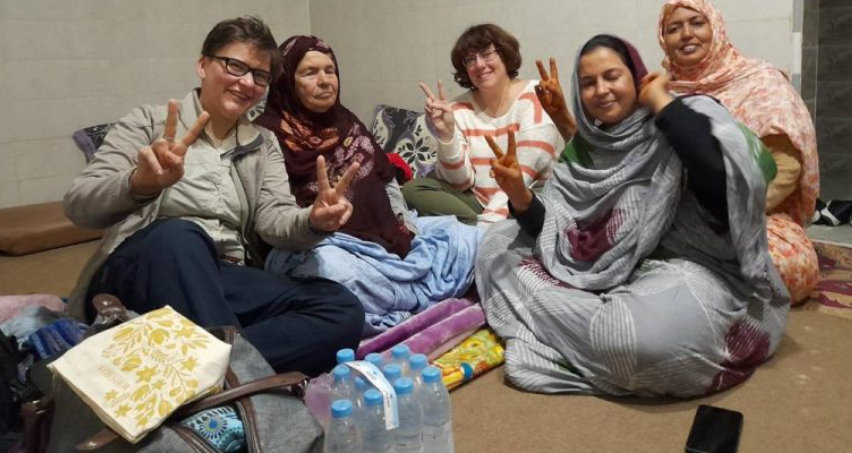 Above photo: US delegation to Western Sahara. DZ breaking.

Both McDonough and Pluta have been guests in the home of the Khaya family since March 15, 2022. Their arrival came on day 482 of an arbitrary detention in which Moroccan agents had periodically broken and entered the Khaya family home, attacked, beaten, and raped Sultana Khaya and her sister, Waara, in front of their 84 year old mother, Mitou. The agents had also destroyed nearly all furniture, cut electrical wires, turned off the water, poisoned the well water, tortured the sisters and injected Sultana with unknown substances, and forcibly prevented visitors entrance to the house.

Sultana Khaya is a human rights defender promoting the right of self-determination for the Saharawi people and ending violence against Saharawi women, through nonviolent efforts. She serves as the president of the Saharawi League for the Defense of Human Rights and the Protection of Western Sahara’s Natural Resources, and is a member of the Saharawi Commission against the Moroccan occupation (ISACOM). She was short-listed for the Sakharov Prize, an honorary award for individuals or groups who have dedicated their lives to the defense of human rights and freedom of thought. She was the winner of the Esther Garcia Award for popular struggle.

McDonough undertook the hunger strike to support Sultana Khaya’s list of demands for the occupying forces of Morocco:

McDonough said as she began the strike, “The Saharawi people have endured heinous human rights abuses since the beginning of the Moroccan Occupation of the Western Sahara in 1975. As an outspoken Saharawi activist, Sultana has been targeted by the occupying Moroccan forces, enduring incarceration, beatings, rapes and having one eye gouged out among many other abuses. This must stop.”