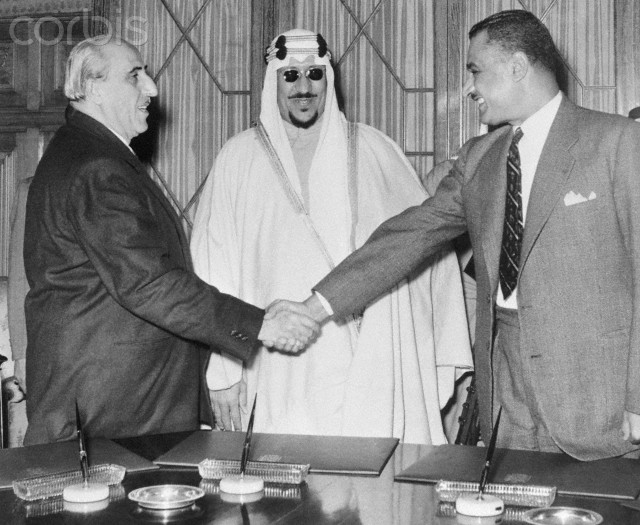 Above: President Shukri al-Quwatli, removed by a coup in 1949, but returned to power in 1955 but in a more ceremonial role, signing a defense agreement with Gamal Abd al-Nasser of Egypt and King Saud in Egypt on March 15, 1956. The agreement said that Syria, Egypt, and Saudi Arabia (The Big Three), would safeguard Arab security and defend the Arab World against Zionist aggression.

An illustrated account of the 1949 coup—possibly CIA-assisted—that plunged the country into decades of political turmoil.

We recently published an article on the need for transparency in foreign policy that focused on the Chelsea Manning case and detailed the CIA coup of the democratic government of Iran in 1953. See Secrets Result in Abuse of Power: New Era of Transparency

Below is another important history, a CIA coup in Syria in 1949.  This coup was followed by a series of coup’s that led Syria away from democracy and into dictatorship.  What would have happened if the US government had stayed out of Syria, not supported the coup plotters and encouraged their democracy continue to develop?  Would the US be planning a military attack today if not for the past misdeeds of US foreign policy?