US Coup Suffers Defeat In Venezuela, Protests Grow Against US Intervention

February 23 may end up being a decisive day in the attempted US-led coup of Venezuela. US puppet, fake president, Juan Guaido, promised so-called humanitarian aid would break through the borders of Venezuela and be brought in. Guaido failed to deliver on that promise because he is not a real president and does not control Venezuela’s borders.

The day was one of embarrassing failure for the coup as in addition to failing to deliver aid, the coup plotters were caught in phony false flag events on the border, being violent and causing the loss of lives. This was supposed to be a turning for the coup; instead, it was a turning point for the defeat of the coup.

This does not mean the US and wealthy Venezuelans are giving up. The US has too many reasons to want to topple Maduro and put in place a puppet like Guaido — the oil, gold, oil and gas, important electronic minerals (needed for weapons) and the example of a nation refusing to be controlled by the US. On Fox News Sunday, Secretary of State Mike Pompeo reiterated the Trump administration’s warning that “every option is on the table” when asked about a military attack. Guaido said he will meet Monday with officials from countries in the region backing his push to topple Maduro and announce the next steps afterward, Bloomberg reported Sunday.

While the US humanitarian “aid” propaganda show ramps up on the Colombian border, I visited a market in El Valle, Caracas where food provided by the government was sold well below market value. This is all taking place amidst an escalating US economic war & threats of invasion. pic.twitter.com/LbRm7nSO9n

The day did not produce the human wave of support that was supposed to accompany USAID (the United States Agency for International Development) trucks across the border. USAID is an agency that has been involved in US regime change operations and other military foreign policy actions in the past. The Red Cross of Colombia has said the US AID does not qualify as true humanitarian aid because it is part of a regime change effort and could be used to smuggle weapons into Venezuela for the coup plotters.

Yesterday pro-coup correspondents were assuring us that Guaidó would lead a “human wave” across Tienditas. Guaidó left hours ago and there’s not a protester in sight. https://t.co/h9baKK1Ye4

Two out of the four trucks with alleged “humanitarian aid” from USAID, which were trying to illegally enter Venezuela, were burned at the border between the two countries. The burning trucks were on the Colombian side of the Francisco de Paula Santander Bridge where Venezuelan opposition leaders have been leading protests.

The independent news site, the Grayzone Project, confirmed the report that coup plotters falsely claimed Venezuela’s military burned USAID trucks on the bridge,when in reality, it was the opposition burning the trucks pretending to be the Venezuelan government. Their reporter Dan Cohen was at the bridge when the buring of the trucks occurred and showed photos of the opposition making and using molitov cocktails to burn the trucks.

I did not see any Venezuelan government forces set fire to US aid trucks on the Colombian side of the border. And neither did you. Actually, the evidence so far is pointing in the other direction. https://t.co/AVBPYtFMiR

Another false flag at the border with Colombia. A “reporter” from @NTN24ve (opposition tv known for fake news) said a truck went on fire because the Venezuelan police launched tear gas. Let me know if you’ve seen tear gas burn a truck before#Venezuela #HandsOfVenezuela pic.twitter.com/P5uRWEBgCd

This video from today shows the guarimberos making Molotov cocktails. Did they use them to set the aid truck on fire? pic.twitter.com/aNFqGVQ0uA

You have no evidence of who set the aid truck on fire and these photos indicate your guarimberos had a hand in it. pic.twitter.com/VsvMDo2XaS

Sen. @MarcoRubio and coup leaders claim the Venezuelan National Guard burned US aid trucks on the bridge in Colombia. But all available evidence points in the opposite direction. https://t.co/vqj9xFd1BB via @MaxBlumenthal

The people of Venezuela showed their opposition to the US coup in massive protests in Caracas.

Maduro at a massive rally in Caracas, waves the Venezuelan flag with the hashtag #TrumpHandsOffVenezuela behind him. Now speaking about US imperialism and the oligarchies. pic.twitter.com/oD3eLSB42N

For weeks the US has vowed to invade VZ using the cynical pretext of humanitarian assistance.

Today the Bolivarian Republic resisted these threats against its sovereignty. Here’s how soldiers from the national guard were received after a long day of facing down US aggression. https://t.co/SW0HofSYdy

RT @telesurenglish: Whilst oligarch Richard Branson pays for a concert in Colombia. Venezuelans are partying for peace. pic.twitter.com/uZSvNxNBjo

A video I made for the concert on the Venezuelan side of the border tonight. #handsoffvenezuela pic.twitter.com/hZUtxmswk5

The coup failures have already begun to undermine Guaido and coup-conspirators like Sen. Marco Rubio, who had little credibility to begin with. Now it is evident Guaido has no plan to accomplish what he claims and is not dislodging Maduro from the presidency or causing mass defections by the military.

Rubio claims Caracas “overplayed their hand” and has only “made it easier to isolate them internationally”.

Every single one of his statements today sound more accurate when you replace “Venezuela” with “the United States”.

Rubio is having a meltdown bc no one is falling for the US-orchestrated stunt on Venezuela’s border. But he’s correct when he says after today it will be difficult for nations to remain neutral.

They’ll have no choice but to reject Washington’s criminal behavior. pic.twitter.com/K0WAUXuDZo

Comments like this by Guaido and the violence of the opposition at the border will further undermine support for the attempted US coup and the puppet, Guaido.

Unfortunate confession? @jguaido says deaths are not “costs” but “an investment” https://t.co/g4u9nWJHvM

Chilean photographer Nicole Kramm was injured in this terrorist attack and is currently in SHOCK in a Venezuelan hospital. She could have been killed. Where is the solidarity of the international press corps against this horrific incident? https://t.co/V4LnQx4N15

I just witnessed Gauidó supporters shut down a @telecincoes journalist who attempted to explain the opposition represent the minority in Venezuela. She couldn’t finish her report. These are Trump’s democracy lovers. pic.twitter.com/p06g2C2WWk

Father Sergio Muñoz explained the regime change plot to me: the humanitarian aid is “symbolic” and meant to create an uprising inside Venezuela. He says Maduro is “politically dead” and there will be violence inside the country as it transitions from socialism to capitalism pic.twitter.com/lXsGPg851w

Senator Bernie Sanders published an outrageously inaccurate statement on Venezuela for which he was roundly criticized, in “a veritable avalanche of disappointment from the Vermont senator’s sympathizers – as well as journalists and celebrities opposed to the regime change operation.” He needs to rethink his position on US imperialism because he is out-of-step with movements in the United States who understand what is going on and is making statements that are the opposite of the facts. Sanders is losing credibility with his consistently inaccurate statements on Venezuela, credibility is essential for someone running from office. It Sanders is afraid of going against the Trump coup it would be better to say nothing that make false statements.

Sanders tweeted “The people of Venezuela are enduring a serious humanitarian crisis. The Maduro government must put the needs of its people first, allow humanitarian aid into the country, and refrain from violence against protesters.” Every statement in that quote is embarrassingly inaccurate. This false statement helps lay the groundwork for US intervention and even war.

Bernie, are you f-ing kidding me! if you buy the Trump, Bolton, Abrams, Rubio line, “humanitarian intervention” and collude in the destruction of Venezuela, you cannot be credible candidate for President of the USA. Or, maybe you can, maybe you’re the perfect stooge for the 1 %.

Ajamu Baraka the national coordinator of Black Alliance for Peace and former Green Party vice presidential nominee put the US coup against the democratically elected government in context, writing:

Anyone who believes the U.S. and Europe are humanitarian forces in the world and have right to intervene in Venezuela is a white supremacist imperialist – no matter what race or ideology one identifies with. https://t.co/bOd1Q2FIZa

The coup plotters hoped today would be a turning point for their effort to replace the legitimate government of Venezuela which has been democratically elected and is recognized by most of the countries in the world but instead the day was an embarrassing dud.

Venezuelan sovereignty has become THE anti-imperialist fight—tomorrow Sunday 500 delegates from 85 nations will meet to establish an International People’s Assembly. Sander’s position is a regressive countercurrent against internationalist solidarity. https://t.co/vygermoW7a

FM Arreaza denounces the propaganda show organized by the US and its puppet states along Venezuela’s sovereign border, vowing the international community will properly respond to this flagrant violation of the UN’s founding charter. https://t.co/YZEEH7yCHr

Protests organized against the coup included some 150 demonstrations around the globe on Saturday show that ordinary people are against any form of foreign interference. Across the United States, there were protests against the attempted US coup in Venezuela.

While @BootsRiley won best first feature and said “The CIA is trying to have a coup in Venezuela… We should stop the US from having regime change for oil in Venezuela” we were outside with the same message #SorryToBotherYou #SpiritAwards pic.twitter.com/jvhw5g8hdi 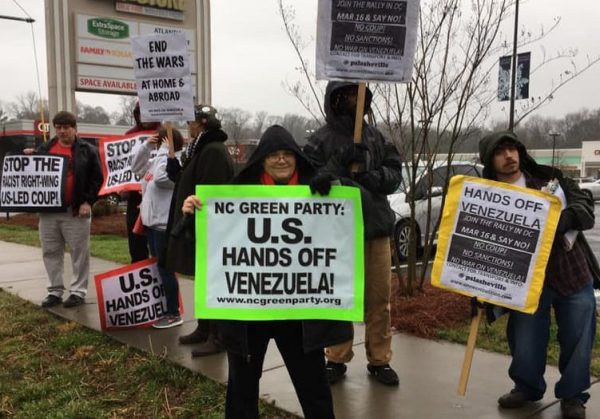 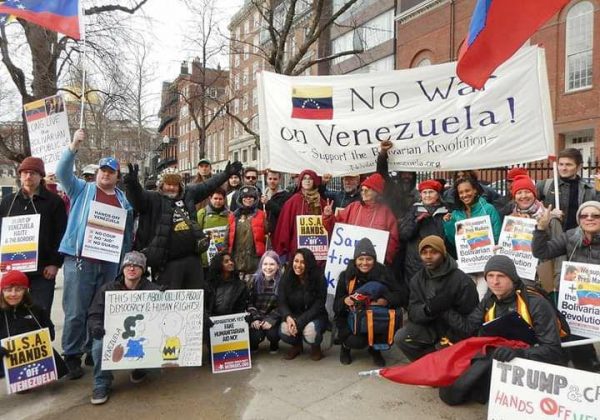 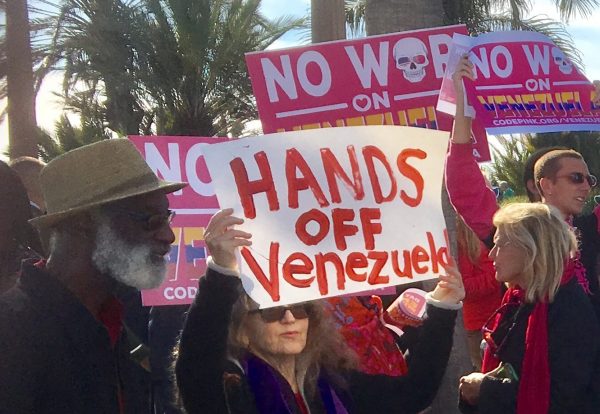 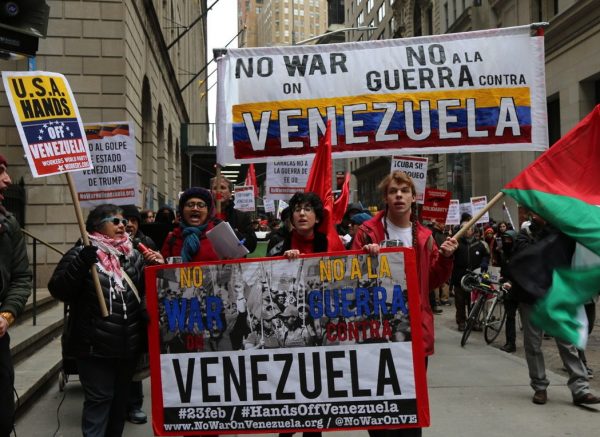 And, there were protests against the US coup in many parts of the world. Telesur reported:

Demonstrations in support of the Venezuelan government on social media are mainly under the hashtags #TrumpHandsOffVenezuela and #VenezuelaEnDefensaDeLaPaz (Venezuela In Defense Of Peace). The Venezuelan Foreign Affairs Ministry has shared several posts to show the support received by the Bolivarian government in different countries and cities around the world.

We were on our way to Iran with a peace delegation so could not participate in the protests against attempted the US coup in Venezuela but we showed our solidarity.

We stand with #Venezuela. The #USCoup has failed. Time to prosecute #Guaido so his ties to the US are made public. Photo @ajamubaraka @MFlowers8 and @KBZeese https://t.co/edOm9Y40gG