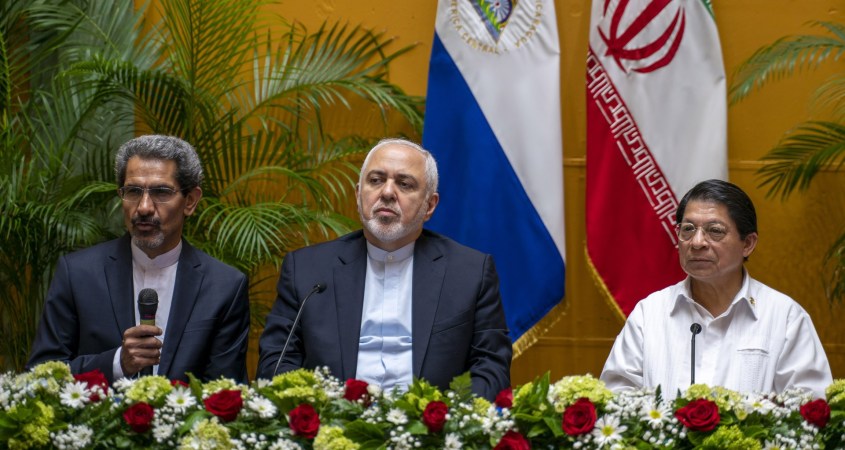 ‘US Economic Terrorism Will Backfire’: Iranian Foreign Minister Calls For Unity In Nicaragua

In Nicaragua, Ben Norton and Max Blumenthal asked Iran’s Foreign Minister Javad Zarif about US sanctions, Europe’s role in the nuclear deal, the Non-Aligned Movement meeting in Venezuela, and seizures of oil tankers.

The Grayzone reports from Managua, the capital of Nicaragua, which just celebrated the 40th anniversary of the Sandinista Revolution that ousted a US-backed dictatorship.

Iran’s foreign minister, Javad Zarif, has just arrived here from Caracas, Venezuela, where he was attending the international summit of the new Non-Aligned Movement, where Iran, Nicaragua, and Venezuela, among other nations, were discussing ways to get around crippling US sanctions that are being imposed on all of these countries.

We asked Minister Zarif several questions about the US economic warfare and the recent seizure of several oil tankers.

Ben Norton: Over a year ago now, the United States unilaterally withdrew from the JCPOA. In your meetings with European diplomats, do you get the sense that they’re actually committed to saving the deal? They say they are, but thus far they have not actually taken serious economic steps to try to work around US sanctions.

You also, minister, have just come from Caracas, where you were meeting with the Non-Aligned Movement. Are countries in the world that are suffering under unilateral US sanctions working to try to create new forms, new economic mechanisms to get around this unilateral economic warfare? And do you think that European countries are willing to be part of that, or have they subordinated their foreign policy to the United States?

Countries are deciding to get away from the US dollar as a means of doing international transactions. Of course this will not happen tomorrow, but this will be a long-term process.

The INSTEX that the Europeans have created in order to conduct business with Iran may not have the desired impact for Iran, but it is in fact a very important alarm for the United States that people are getting away from focusing and using primarily the US dollars in their international transactions.

The same is happening between even US allies and US friends in our region and beyond our region.

So it is important that we, who are subjects of US economic terrorism, so-called sanctions, understand the realities and understand our potential.

And we started yesterday in Caracas discussing these. And we are discussing the same with our Nicaraguan friends, in many areas. And I think the future is ours.

I think we want to live based on international law, the rule of law, the charter of the United Nations. And I think those who are running against these measures, those who want to revive the unilateralist measures of 20th and 19th century, are doomed to fail.

But whether they are prepared to make the necessary investment in order to to achieve this goal is a different matter.

I have said time and again that you cannot swim without getting wet. The Europeans must be ready to invest for their own future. Not for us; we’re not asking anybody to invest for us.

If the Europeans want to be able to have a voice in international relations, then they need to invest in having that voice.

Max Blumenthal: It’s been widely reported, and the Spanish foreign minister has said, that the UK seized an Iranian oil tanker on orders from the United States, specifically from John Bolton. Does Iran’s retaliatory measures, seizing a British tanker which apparently entered Iranian waters, signal a lack of faith in the UK, which is a signatory of the Iran deal?

And of Europe in general, that it will not honor the Iran deal, and that it is being led by what you call the B Team, of Bolton, Bibi, bin Zayed, and bin Salman? And what does this mean for the future of Iranian and European relations?

The EU does not apply its rules to third parties as a matter of principle. And the United Kingdom, on its way out of the EU, is becoming holier than the Pope, in doing things that the EU itself would not do, and has said publicly that it would not do.

As soon as President Trump got elected, and before he entered into office, the United Kingdom prevented implementation of agreements that we had reached with the previous government of the United States on behalf of President Trump. And the Iranian people have not forgotten that.

However, the measures that we took in the Strait of Hormuz against the US ship was not in retaliation, but was an implementation of international law.

What the Brits did, and what the Gibraltar authorities did, in the Strait of Gibraltar was a violation of international law, was piracy.

What we did was in order to implement the provisions of international law on safe passage. The UK ship had turned off its signalling for more than the time that it was allowed to do so; was passing through the wrong channels; endangering the safety and security of shipping and navigation in the Strait of Hormuz, for which we are responsible.

And it is much, much better for the United Kingdom not to be engaged in implementing the ploys of the B Team.

The B Team is losing ground in the United States, and now they are turning their attention to the United Kingdom.

I guess the same policies that failed in the US will fail in the United Kingdom.