Above Photo: People take boxes of food staples, such as beans, rice, tuna and powdered milk, provided by the government program “CLAP,” which stands for Local Committees of Supply and Production, in Caracas, Venezuela, May 16, 2018. The squeeze of financial sanctions by the Trump administration is choking the cash-starved government as it struggles to feed its people. Ariana Cubillos | AP

While the U.S. likes to characterize its regime-change efforts in Venezuela as humanitarian in nature, the targeting of officials involved in a program that so many ordinary Venezuelans rely on reveals that the U.S. aims to install opposition leader Juan Guaido by any means necessary.

CARACAS, VENEZUELA — The U.S. government is preparing to levy sanctions against officials associated with Venezuela’s food subsidy program known as CLAP, the latest in a long list of unilateral coercive measures against the country.

The new sanctions follow a report by the Center for Economic Policy Research, which stated that 40,000 Venezuelans have died because of sanctions imposed by the Trump administration that prevent life-saving medicines and food from getting into the country.

“The sanctions are depriving Venezuelans of lifesaving medicines, medical equipment, food, and other essential imports,” Mark Weisbrot, who co-authored the report, wrote in a press release.

As a result of the economic embargo imposed by the U.S. from 2015 through the last year, financial damages to Venezuelan economy totaled $130 billion.”

Sputnik News recently compiled a timeline of sanctions against Venezuela and its officials, the majority of which have occurred during the Trump administration.

Now “people familiar with the matter” tell Reuters that the Trump administration — including the National Security Council, Treasury Department, State Department, and Justice Department — is preparing another round of sanctions to be imposed in the next three months. That will include sanctions against CLAP.

Many Venezuelan families rely on the subsidized food program, known by its Spanish initials CLAP, for their basic necessities in the oil-producing South American nation, where hyperinflation has raged for years.”

Providing for the people and easing the burdens of economic warfare

CLAP served 5,734,705 Venezuelan households. That figure was reported in 2017 as President Nicolas Maduro vowed to extend the program to 6 million families. The program has allowed Venezuelans to purchase essential products at remarkably low prices. According to Venezuela Analysis, that looks like:

A kilo of meat, a whole chicken, three packs of corn flour, pasta, canned sardines,toothpaste, and sanitary wipes all for 7,500 Bolivares, less than 3 US dollars. Eggs and fresh vegetables were also sold at affordable prices.”

Sara Flounders, co-director of the International Action Center, recently told MintPress News that she too had been to Venezuela and witnessed the impressive food program first-hand:

It’s the U.S. that’s to blame for 40,000 deaths in Venezuela because the U.S. cut off 80 percent of the essential medicines to Venezuela. This doesn’t have to happen. This is why we say ‘sanctions kill.’ This is a form of economic warfare at its most dire.

Venezuela is a rich country. The richest country in oil and gold and in the ability to provide for its people. More than 2.5 million new housing units; medical clinics everywhere; and suddenly they can’t provide the actual medicines that’s needed in any clinic — basic medicines: for diabetes, for heart, for cancer drugs and things like that.

They can grow their own food but the U.S. sanctions are on the most essential things… These things aren’t hard to get but when they’re suddenly cut off it makes real shortages.

I was very impressed by the form of rationing in Venezuela so that everyone has the essentials. They get a box of supplies every two weeks; it’s a program called CLAP. Everything from cooking oil to toilet paper to personal hygiene products to rice and coffee and sugar; just basic things that you can’t grow right away are being provided to more than three quarters of the population. So this provides basic security.” 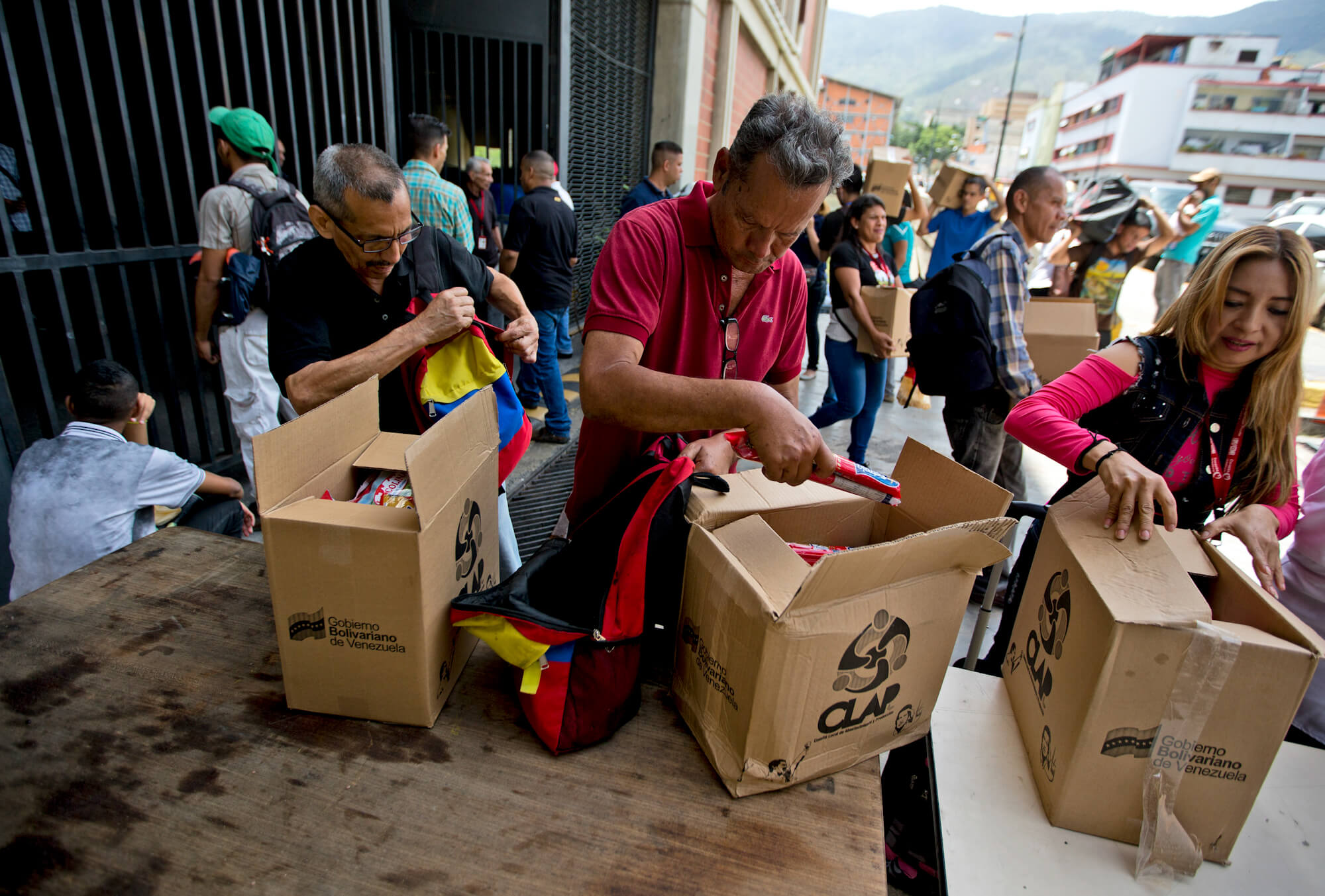 CLAP supplies include chicken, meat, and 36 eggs per month. Instead of 10,000 Bolivars for a chicken in the private market, the CLAP cost for all the added animal protein is 500 Bolivars.

CLAP is not just a simple delivery from a truck. There is a high level of community organization, also called CLAPs, within the Communal Councils (consejo comunal). The CLAP coordinator is elected in the community, like all responsible positions of the councils.

I attended an evening CLAP meeting — in the Caracas parish of Antímano — of three CLAPs in which 207 families take part. All the families there are covered — all 65,000.”

Not a novel tactic for the US

The U.S. attempt to target CLAP officials with sanctions is eerily reminiscent of American policy against Cuba in the 1960s, continuing to today as it is still under a blockade. A U.S. government memo reads:

The only foreseeable means of alienating internal support [for Fidel Castro] is through disenchantment and disaffection based on economic dissatisfaction and hardship.”

The same memo also speaks of “bring[ing] about hunger, desperation and overthrow of government.”

While the U.S. likes to characterize its regime-change efforts in Venezuela as humanitarian in nature, the targeting of officials involved in a program that so many rely on reveals that the U.S. aims to install opposition leader Juan Guaido by any means necessary.