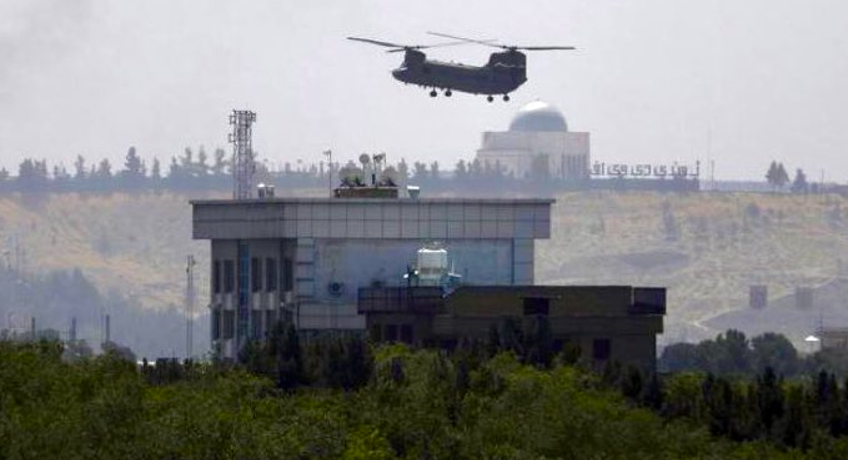 US Embassy Staff Flee Kabul As The Taliban Takes Control

Above photo: US diplomat evacuate US from embassy via helicopter as the #Taliban enter #Kabul from all sides. #Afghanistan (2021). Twitter.

The Taliban took control of Kabul today and plan to announce an interim government, as Moon of Alabama reports:

All cities are now in Taliban hands as are all border crossings. President Ashraf Ghani has resigned.

A new interim government will be announced as soon as Mullah Abdul Ghani Baradar arrives in Kabul. The U.S. is frantically evacuating its embassy.

The moment Boeing CH-47 Chinook’s carrying US Embassy staff to #Kabul airport. Lowest moment in US history after Saigon, footage will haunt US for times to come … #Afghanistan pic.twitter.com/bhe5fGViQ1

Associated Press (cited in the above article), writes:

Taliban fighters entered Kabul on Sunday and sought the unconditional surrender of the central government, officials said, as Afghans and foreigners alike raced for the exit, signaling the end of a 20-year Western experiment aimed at remaking Afghanistan.

The beleaguered central government, meanwhile, hoped for an interim administration, but increasingly had few cards to play. Civilians fearing that the Taliban could reimpose the kind of brutal rule that all but eliminated women’s rights rushed to leave the country, lining up at cash machines to withdraw their life savings.

Helicopters buzzed overhead as part of an evacuation of personnel from the U.S. Embassy. Several other Western missions were also preparing to get staff out.

In a stunning rout, the Taliban seized nearly all of Afghanistan in just over a week, despite the hundreds of billions of dollars spent by the U.S. and NATO over nearly two decades to build up Afghan security forces. Just days earlier, an American military assessment estimated it would be a month before the capital would come under insurgent pressure.

Instead, the Taliban swiftly defeated, co-opted or sent Afghan security forces fleeing from wide swaths of the country, even though they had some air support from the U.S. military.

On Sunday, the insurgents entered the outskirts of Kabul but apparently remained outside of the city’s downtown. Sporadic gunfire echoed at times though the streets were largely quiet.

Taliban spokesman Suhail Shaheen told Qatar’s Al-Jazeera English satellite news channel that the insurgents are “awaiting a peaceful transfer of Kabul city.” He declined to offer specifics on any possible negotiations between his forces and the government.

But when pressed on what kind of agreement the Taliban wanted, Shaheen acknowledged that they were seeking an unconditional surrender by the central government.

History repeats itself!
Just like in vietnam the #AmericanEmpire (and its puppet #European allies) are being defeated in #Afghanistan .
The #Afghan fighters are rolling the streets of Afghan cities with captured #American humvees.@France24_en pic.twitter.com/sb13P6qjEC

Antiwar.com reports that the United States deployed troops to evacuate the US Embassy in Kabul as the staff scrambled to destroy documents:

The US has already deployed 3,000 troops that are due to arrive in Kabul soon to help evacuate some diplomatic staff. When the move was announced, the State Department portrayed it as only a drawdown and insisted the embassy would stay open. But behind the scenes, the US appears to be accepting reality.

The embassy has directed its staff to destroy sensitive materials, including documents that feature American flags that could be used for propaganda. “Please also include items with embassy or agency logos, American flags, or items which could be misused in propaganda efforts,” an embassy notice said, according to CNN.

There have been reports that say the Biden administration is considering moving the embassy to the Kabul airport, where the 3,000 US troops are being deployed to facilitate the evacuation. Only time will tell if the US tries to leave some sort of diplomatic mission or chooses to completely withdraw from Afghanistan.

The US has also deployed about 1,000 troops to Qatar to help process visas for Afghan interpreters and an entire infantry brigade combat brigade of some 4,000 soldiers to Kuwait to stand by for a possible Afghanistan deployment. There are about 4,000 civilian personnel at the embassy, including 1,400 US citizens.

#Negotiations going on in the #Afghanistan Presidential Palace to transfer power to the #Taliban .https://t.co/isvEgnYKdz