US Empire Is Failing, Time To Change Course

Above: Protest outside of Dublin, Ireland Post Office at No US/NATO Bases Conference on November 16, 2018 by Ellen Davidson.

We are writing to you from the European Union. We just attended the International Conference Against US/NATO Military Bases held in Dublin, Ireland. The conference was held in Liberty Hall, the headquarters of the Irish Transport and General Workers Union early in the 20th century and the headquarters of the Irish Citizen Army (ICA) and the Easter Rising in 1916 against British rule of Ireland. The overriding principle of the Proclamation of the Irish Republic signed at Liberty Hall was “the right of the people of Ireland to the ownership of Ireland” in opposition to British imperialism. This was a fitting venue for the No US/NATO Bases conference.

After that, we traveled to The Hague, where we met with Palestinian rights activists and delivered a letter to the International Criminal Court calling for a full investigation of Israel for its war crimes. 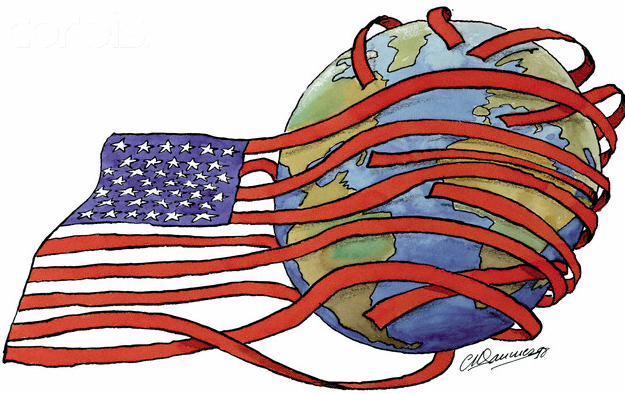 The Depth Of US Empire-Imperialism

At the No US/NATO Bases conference, an overriding message was the breadth and depth of US empire and the impact of US and western imperialism around the world, including the environmental and health risks. The US empire consists of 800 US bases in 80 countries and US military personnel in more than 170 countries. In addition, the US uses economic war and sanctions to dominate other nations. This has brought misery to people around the globe.

Paul Pumphrey, of Friends of the the Congo and co-founder of the US South African Anti-Apartheid movement, described how the Congo has been brutalized by imperialism for 500 years. The Congo is the size of the European Union, has a population of 70 million people and contains more than $20 trillion in mineral wealth. It is one of the wealthiest countries in the world yet its people are among the world’s poorest because of domination by western imperialists for its riches. Among the minerals in the Congo are coltan, cobalt and copper, which are essential for 21st century electronics.

Until recently, the US worked behind the scenes through countries like Belgium, whose King Leopold II ruled the Congo as his own private property from 1885 – 1908. During his reign, as many as 15 million Congolese were slaughtered and their wealth was stolen.

Beginning in the Clinton era, the US used Uganda and Rwanda to attack the Congo, killing and displacing millions on behalf of tech giants who demand cheap access to the Democratic Republic of the Congo’s minerals. With the rising power of China, which is loaning money to and investing in infrastructure in African nations, US militarism has been forced to become public. The US created Africa Command, AFRICOM, in the final year of the Bush administration. President Obama greatly expanded that and today, the US is all over the African continent.

Another example of little understood US empire-imperialism is Korea. The United States invaded Korea multiple times in the second half of the 19th Century, aided the imperialism and brutal occupation of Korea by Japan and then killed millions of Koreans in the Korean War, during which there was an arbitrary division of the nation. The US has continued to be an aggressor threatening Korea with constant practice attacks while blaming Korea for aggression. After 65 years, the US still refuses to sign a peace treaty to end the Korean War.

These are two countries of many where US imperialism has wrought tremendous damage over more than 120 years.

Demonstration against war and US empire November 2015 in Bangalore, India from Organization of Promoting Afghan Women’s Capabilities

A Recipe for Failure

Now, US empire is in decline. The disastrous never-ending wars in Afghanistan and Iraq have sapped trillions of dollars from the US economy and resulted in US military forces being spread thin. Overall, the “war on terror” has cost the US nearly $6 trillion, yet there continues to be no end in sight. The result of the “war” is massive destruction in Iraq, Afghanistan, Libya and Syria, forcing mass migration that impacts many surrounding nations, and despite this the US is threatening Iran.

In Afghanistan, the longest US war, the Trump administration just broke the record for annual bombs dropped with more than 5,200 dropped by the end of September. The Taliban controls more of the country than at any time since the war began. We have to ask what the US hopes to achieve by continuing this assault on the people of Afghanistan.

Recently, the US changed its national security strategy from the “war on terror” to one of “great power conflict”, meaning Russia and China. That is the reason for fear-mongering in the US about these countries. But, last week the National Defense Strategy Commission issued a report that concluded “U.S. military superiority is no longer assured and the implications for American interests and American security are severe.”

That’s right, at a time of record military spending, 64% of US federal discretionary spending, the US has placed itself in a position of weakness. The report, Providing for the Common Defense, could not guarantee the US could win a war against Russia and China, indeed such wars put the US at “risk of being overwhelmed.” Yet, the US is antagonizing both nations through large military exercises off their coasts.

The Pentagon recognizes that the US is no longer the dominant power in the world. A June 2017 report, “At Our Own Peril: DoD Risk Assessment in a Post-Primacy World,” found that the US is no longer dominant militarily or economically. It describes US primacy as “fraying” and that it may even be “collapsing”. This is a recognition of the coming end of US empire, but rather than adapting to that reality, the Pentagon report calls for more military spending, more aggression and more spying to regain power.

This response is driving more of an arms race. In its February 2018 Nuclear Posture Review, the Pentagon announced a plan to spend $1.7 trillion dollars over the next decade to update and expand nuclear weapons. Add to that the threat of the US pulling out of the Intermediate-Range Nuclear Forces (INF) Treaty, which is being viewed as aggression by Russia and is causing panic in European Union nations, and other nations feel a necessity to protect themselves from the US.

Last week, French President Emmanuel Macron called for a “real European army” to defend itself from “China, Russia and even the United States of America.” This call was backed up by German Chancellor Angela Merkel who also pointedly said that Europe can no longer rely on the US for its defense. There is now an almost an all-party consensus in Germany – in response to Macron’s rhetoric. A “European army” widely understood as replacement for NATO. Eric Margolis summarized, “Germany and France, Europe’s two big powers, were declaring independence from US hegemony seven decades after the end of World War II.”

Throwing more money at the problem won’t fix it. The Pentagon, a $2.7 trillion organization, doesn’t even know where the money it receives is going. The Pentagon flunked its first audit conducted by 1,200 auditors who examined financial accounting on a wide range of spending including on weapons systems, military personnel and property.

It is US foreign and domestic policies that are causing the crisis. Corporate trade agreements that enrich transnational corporations by allowing them to go abroad while hollowing out US industrial capacity at home has left the US economically weakened. The Annual Industrial Capabilities report, published on March 1, 2018 by the Pentagon warns that reliance on foreign-sourced materials combined with “twenty years of intermittent conflict,” have put a strain on US manufacturers of weapons, parts and ammunition. The US economy cannot sustain the US military and the US military must rely on foreign sources for essential materials, some only found in adversarial countries.

The US is also fighting an economic war around the globe, unilaterally putting in place sanctions against numerous countries, e.g. Venezuela, Nicaragua, Iran, Syria, North Korea, Russia and China. This is backfiring and leaving the US out of trade. It is also abusing tariffs, creating a trade war that unites the US’ opposition, including the EU, China, India, and even the UK.  Sanctions are increasing the speed toward the de-dollarization of trade, countries dropping the dollar in trade and the end of the dollar hegemony as the global reserve currency.

These economic wars are creating self-inflicted economic wounds at a time when the CIA already ranks the US as the third largest global economy after China and the European Union based on Purchasing Power Parity GDP,  the value of all final goods and services produced within a given year. An Empire mindset and Empire economics are no longer working for the people of the United States or the world.

The Pentagon and elites who profit from war are trapped in a devastating cycle that will bring greater insecurity to the world and risks another world war, including a nuclear war. This makes the work to build a movement of movements for peace an imperative. That is why we are currently abroad building relationships with people and organizations for international solidarity. People who respect international laws designed to solve conflicts without violence and to hold war criminals accountable must work together.

Here are some actions that you can take to build peace:

Popular Resistance is also focusing on coordinating actions and events around the 70th anniversary of NATO in Washington, DC on April 4. This is also the anniversary of the 1968 murder of Rev. Dr. Martin Luther King, Jr and Dr. King’s 1967 Beyond Vietnam speech where he described the United States as “the greatest purveyor of violence in the world today.”

In that speech, Dr. King also named the triple evils of militarism, racism and capitalism. We would add climate change to that list today as crises around which we can unite. We’ll be working to clarify the connections between these “evils” with the goal of building the mass movement necessary to change the current course.

All donations are tax deductible and if you donate $35 or more, we will send you an item from the Popular Resistance store. Contact info@popularresistance.org to let us know which item you would like to have.