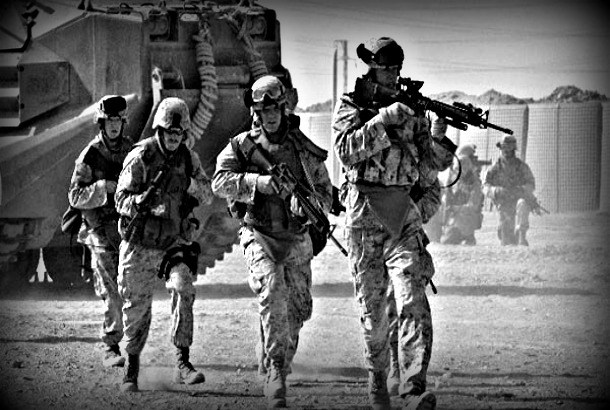 US Expands Military Footprint In Syria To EIGHT Bases

Note: The US Empire has been called an empire of bases. It seems like once the US moves into a country with military bases those bases do not leave. The US has more bases around the world than any country in world history — estimates range to more than 1,100 military bases and outposts. KZ

“The US is setting up its military bases in the territories that were liberated from Daesh by our fighters during the fight against terrorism,” ~ Senior Representative of the US armed, proxy, SDF forces.

With very little fanfare from the western media, the US is quietly creating a hostile military footprint inside Syria.

By establishing a chain of airbases, military outposts and missile bases inside Syria, the US is illegally, stealth-occupying a sovereign nation. The number of US military installations in Syria has increased to eight bases according to recent reports, and possibly nine according to one other military analyst.

We should also not forget the malevolent presence of Israel in the criminally annexed southern Syrian territory of the Golan Heights. This could just as easily be included in the list of US military outposts inside Syria.

Two regional intelligence sources disclosed mid-June that the US military moved a new truck-mounted, long-range rocket launcher from Jordan to a US base in al-Tanf in Southeastern Homs, near the Iraqi and Jordanian borders, stepping up its presence in the area.

The sources said the (High Mobility Artillery Rocket Systems – HIMARS) had moved into the desert garrison, which saw a buildup in recent weeks as tensions escalate after the US-led coalition struck positions of the Syrian forces to prevent them advancing toward the al-Tanf base.

“They have arrived now in al-Tanf and they are a significant boost to the US military presence there,” one senior intelligence source said, without elaborating. “The HIMARS had already been deployed in Northern Syria with US-backed forces battling ISIL militants”, he added.

The missile system’s deployment at al-Tanf would give US forces the ability to strike targets within its 300-kilometer range. ~ FarsNews

A report in FarsNews today goes so far as to suggest that the US has now established a total of six military air-base facilities. This might represent wishful thinking on behalf of the geopolitically ambitious Kurdish factions who are seeking establish an independent state inside Syria [it must be noted that many Syrian Kurds oppose this agenda and have remained loyal to Syria]:

“The US has set up two airports in Hasaka, one airport in Qamishli, two airports in al-Malekiyeh (Dirik), and one more airport in Tal Abyadh at border with Turkey in addition to a military squad center in the town of Manbij in Northeastern Aleppo,” Hamou said.

In March 2016, a Reuters report also discussed the US establishment of military air-bases in North East Syria, in Hasaka and in Northern Syria, in Kobani. Both areas that are controlled by Kurdish forces, maintained by the US, and championed by Israel in their bid for statehood and independence from Syria which would inevitably entail the annexing of Syrian territory.

“The Erbil-based news website BasNews, quoting a military source in the Kurdish-backed Syria Democratic Forces (SDF), said most of the work on a runway in the oil town of Rmeilan in Hasaka was complete while a new air base southeast of Kobani, straddling the Turkish border, was being constructed.” ~ Reuters

US CENTCOM were quick to deny such a blatant violation of International law with familiar doublespeak that left room for the interpretation that the US was indeed preparing to empower its Kurdish proxies in their bid for “independence”.

“Our location and troop strength remains small and in keeping with what has been previously briefed by defense officials,” he said in a statement. “That being said, U.S. forces in Syria are consistently looking for ways to increase efficiency for logistics and personnel recovery support.” (Emphasis added)

In April 2017, CENTCOM announced that they were “expanding” the airbase in Kobani:

“The Air Force has expanded an air base in northern Syria to assist in the fight to retake the city of Raqqa from the Islamic State, U.S. Central Command said. The base is near Kobani, which is about 90 miles north of Raqqa, the last urban stronghold for ISIS in Syria. It gives the United States an additional location to launch aircraft to support U.S. and other anti-ISIS forces in the campaign to recapture the city, said Col. John Thomas, a spokesman for Central Command.”

The following video was taken from Operation Inherent Resolve Facebook page. A United States Air Force MC-130 crew prepares for a resupply airdrop over an undisclosed location in Syria. Watch ~

.
Airmen from the 621st Contingency Response Group have been deployed to modify and “expand” the Kobani airbase, with the stated intention of supporting anti-ISIS coalitions on the ground in Syria.

The fundamental flaw with US Coalitions is that they do not include the Syrian Arab Army, Russia and their allies who have been systematically fighting ISIS & NATO state extremists, since the start of the externally waged war against Syria. The US coalition is, in reality, an uninvited, hostile force, violating Syria’s territorial integrity, operating under the false pretext of combatting ISIS while many reports expose the collusion between US coalition command & forces and ISIS.

On the 18th June, the US downed a Syrian fighter jet, on an anti-ISIS mission. The Syrian jet was brought down in Rasafah, in the southern Raqqa countryside.

The “flagrant attack was an attempt to undermine the efforts of the army as the only effective force capable with its allies … in fighting terrorism across its territory”, the statement said. “This comes at a time when the Syrian army and its allies were making clear advances in fighting the [Islamic State] terrorist group.“ ~ Syrian Arab Army statement 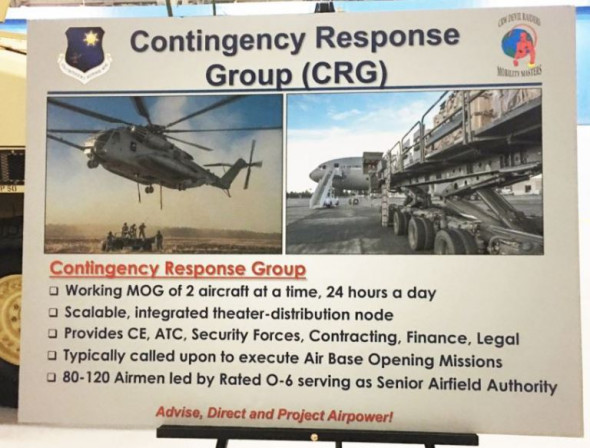 US Airforce illustration showing how the Contingency Response Group operates.

With this increase in US military activity inside Syria, the number of civilian deaths under US coalition airstrikes has also been dramatically increasing. CENTCOM has admitted responsibility for the deaths of 484 civilians in their alleged anti-ISIS operations in Iraq and Syria but it is extremely likely that this figure is being artificially lowered from its realistic level:

29th June: Eight civilians were killed and others were injured in a new massacre committed by the aircrafts of the US-led international coalition on al-Sour town in northern Deir Ezzor.

Local and media sources confirmed that warplanes of the US-led coalition launched raids on civilians’ homes in al-Sour in the northern countryside of Deir Ezzor province, claiming the lives of eight people and injuring many others. ~ SANA

US Military Footprint is Strategically Placed

The US military footprint has been strategically placed inside Syria. The US has been waging a war against the sovereign nation of Syria for over six years in an attempt to secure “regime change” and the creation of a suitable puppet regime, compliant to US hegemony in the region. It has failed. Its multiple proxies have been consummately driven out and forced to retreat by the Syrian Arab Army and its allies. A recent article in the Duran demonstrates the Russia effect on the battles to liberate Syria from the clutches of NATO and Gulf state terrorists.  The following two maps were taken from the article: 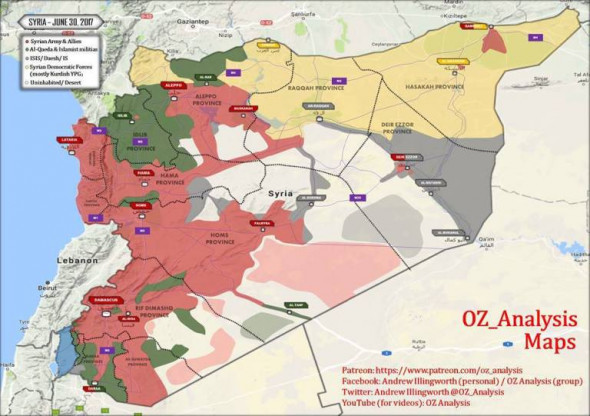 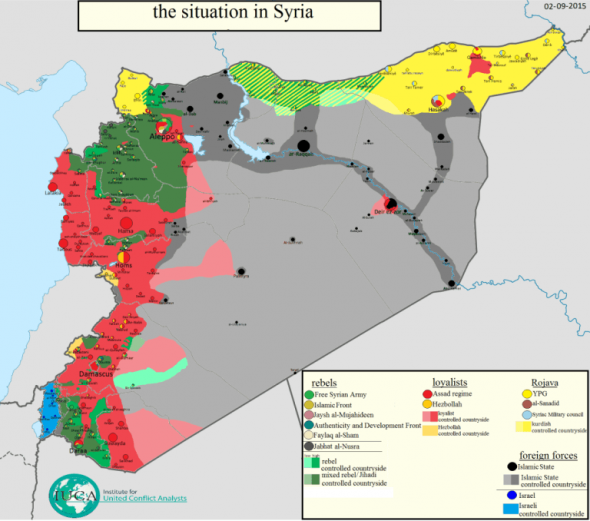 September 2015, just before Russia launched their legal intervention against terrorism in Syria at the invitation of the internationally recognised Syrian government.

Based on information regarding the US military bases in Syria, even with some variation ref numbers of bases versus outposts, we can pinpoint the main areas of concern for Washington:

The US bases are concentrated in the areas controlled by their currently, preferred proxies, the SDF in the north of Syria and the Maghawir al Thawra  & Southern Front militant forces, close to Al Tanf on the Syrian border with Iraq: 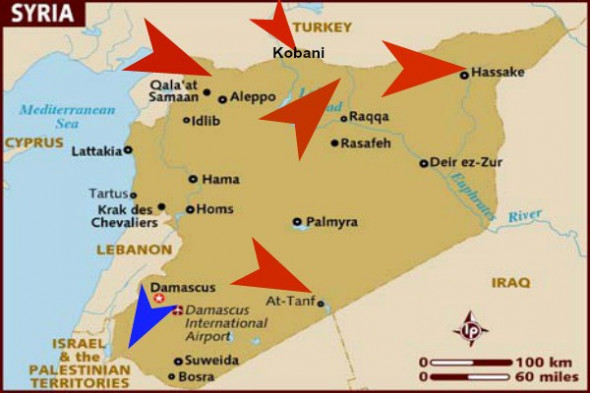 In a recent article for the American Conservative, political analyst, Sharmine Narwani laid out the US agenda, in establishing a military camp at Al Tanf and the abject failure of this military strategy:

“Re-establishing Syrian control over the highway running from Deir ez-Zor to Albu Kamal and al-Qaim is also a priority for Syria’s allies in Iran. Dr. Masoud Asadollahi, a Damascus-based expert in Middle East affairs explains: “The road through Albu Kamal is Iran’s favored option – it is a shorter path to Baghdad, safer, and runs through green, habitable areas. The M1 highway (Damascus-Baghdad) is more dangerous for Iran because it runs through Iraq’s Anbar province and areas that are mostly desert.”

If the U.S. objective in al-Tanaf was to block the southern highway between Syria and Iraq, thereby cutting off Iran’s land access to the borders of Palestine, they have been badly outmaneuvered. Syrian, Iraqi, and allied troops have now essentially trapped the U.S.-led forces in a fairly useless triangle down south, and created a new triangle (between Palmyra, Deir ez-Zor, and Albu Kamal) for their “final battle” against ISIS.”

In the North, we can speculate that the US is trying to create optimum conditions for an autonomous Kurdish region and the eventual partitioning of Syria, following the already skewed US road map.  According to Gevorg Mirzayan, Associate Professor of Political Science at Russia’s Finance University, Kurds control 20% of Syrian territory, when ISIS is defeated the likelihood is that they will want to declare a “sovereign” state.  This would play into, not only US, but primarily Israel’s hands.

The US/Israeli agenda has clearly been to form a buffer zone inside all Syrian borders from North to East to South preventing Syrian access to neighbouring country borders & territory and reducing Syria to a geopolitically isolated, internalized peninsular. This plan was discussed by Syriana Analysis:

“We’ve even set up a base at Al Tanf in the southern part, it’s an American base within the country of Syria,” Black said. “You can’t get a more obvious violation of international law than to actually move in and set up a military base in a sovereign country that has never taken any offensive action towards our country.” ~ Senator Richard Black

The US is relentlessly flaunting international law, as it has throughout this protracted conflict – it has established, inside Syria, almost as many bases as it has set up in its regional, rogue state allies, Saudi Arabia and Israel. Syria, a country that the US has been punishing for over six years, via economic, media and militant terrorism. The lawlessness of the US hegemon has now reached epic proportions and threatens to engulf Syria and the region in sectarian conflict for a while yet thanks to its Machiavellian meddling in a sovereign nation’s affairs on almost every front.

However, the US has consistently underestimated its foe and apparently failed to factor in the Russian military capability. On Wednesday, Russian Tu-95MS strategic bombers struck ISIS targets in Syria with X-101 cruise missiles, as reported by South Front. “The strike was made from the range of about 1,000 kilometers. The Tu-95MS bombers took off from an airfield in Russia.”

From a practical military perspective, the US is out of its depth in Syria and no amount of proxies are going to change that fact, it remains to be seen to what extent the US will further bury itself in a swamp of its own making before it concedes defeat to the steadfastness of the Syrian people, the Syrian Arab Army and the Syrian state.

“What Planet Earth, and the creatures thereon, need more than anything is leaders in the West who are intelligent, who have a moral conscience, who respect truth, and who are capable of understanding the limits to their power.

But the Western World has no such people.”