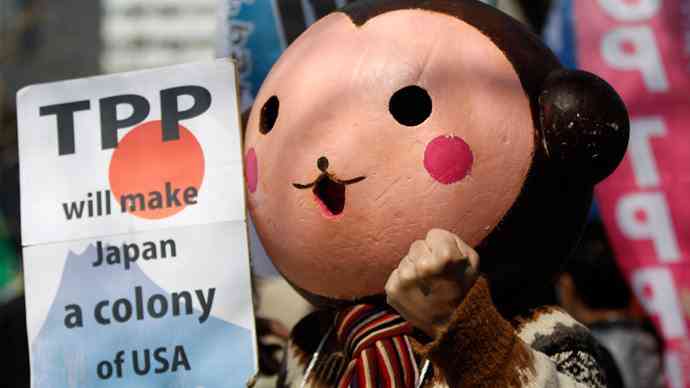 US Fails to Close TPP Deal as Wikileaks Exposes Discord

Note: The United States is blaming Wikileaks for sowing discord, but in fact what the most recent leaks showed was there is discord because of the US negotiating positions.  Their extreme pro-corporate agenda is not something other countries support, in addition the US is being inflexible in its pro-corporate demands and trying to force them through with bullying.  The failure of the TPP is not Wikileaks it is the US Trade Representative and the Obama Administration insisting on a rigged trade agreement for the transnational corporations.  Of course, they will publicly blame the leaks, but anyone who reads the leaks will see the problem is the United States being in bed with transnational corporate power rather than what is best for the people of the world.  Before this last round of negotiations we described the negotiations as “in crisis” because the negotiating positions and approach of US negotiators were causing deep divisions.  When the intellectual property chapter was leaked it was evident that the US was isolated in its negotiating position. If they want to blame the correct culprit for the failure of the TPP, they need to look in the mirror not point at Wikileaks.

The latest round of talks over the Trans-Pacific Partnership (TPP) have failed to lead to a resolution, with ministers confirming that debate is likely to continue into next year.

The announcement comes as Wikileaks releases an internal memo andspreadsheet, revealing that the US is putting heavy pressure on other nations to conform with its demands.

Following four days of talks in Singapore, the heads of the various delegations have today released a statement saying that while they’ve identified what they call “potential landing zones” for the areas that remain contentious, they have failed to reach a resolution as hoped.

“Therefore, we have decided to continue our intensive work in the coming weeks toward such an agreement,” they say. “We will also further our consultations with stakeholders and engage in our respective political processes. Following additional work by negotiators, we intend to meet again next month.”

The statement coincides with the release of two more documents from Wikileaks which reveal just how far apart the US is from the other nations involved in the treaty, with 19 points of disagreement in the area of intellectual property alone. One of the documents speaks of “great pressure” being applied by the US.

Australia in particular is standing firm, objecting to the US’ proposals for copyright protection, parallel importation proposals and criminalization of copyright infringement. It’s also opposed to a measure supported by all the other nations involved to limit the liability of ISPs for copyright infringement by their users. Japan, too – which only joined the talks in March – has vowed to protect its agricultural markets, which the US wishes to see opened up.

But the TPP is causing increasing disquiet in the US, as well as around the world. Over the weekend, campaign group Knowledge Ecology International(KEI) revealed that Nobel prize-winning economist Joseph Stiglitz of theColumbia University School of Business has written to the negotiators, calling on them to resist a tranche of measures that he says would weaken the 2001 Doha Declaration on TRIPS and Public Health.

These include extending patent terms and lowering the threshold for patentability of medicines, making surgical procedures patentable and mandating monopolies of 12 years on test data for biologic drugs. He also objects to the granting of compulsory licenses on patents, increasing damages for patent and copyright infringement, placing lower limits on injunctions, narrowing copyright exceptions and extending copyright protection to life plus 70 years.

“The TPP proposes to freeze into a binding trade agreement many of the worst features of the worst laws in the TPP countries, making needed reforms extremely difficult if not impossible,” he writes.

His sentiments are echoed by 29 organizations and more than 70 other individuals in a separate letter.

“The primary harm from the life + 70 copyright term is the loss of access to countless books, newspapers, pamphlets, photographs, films, sound recordings and other works that are ‘owned’ but largely not commercialized, forgotten, and lost,” they say. “The extended terms are also costly to consumers and performers, while benefiting persons and corporate owners that had nothing to do with the creation of the work.”

The failure of the talks to reach agreement is a major blow for the US, which hoped to see the deal largely wrapped up by now. The ministers say they’ll meet again next month, but haven’t set any new timeline for completion. And with many of the outstanding issues having been aired for months, it’s hard to see how full agreement will be reached any time soon.