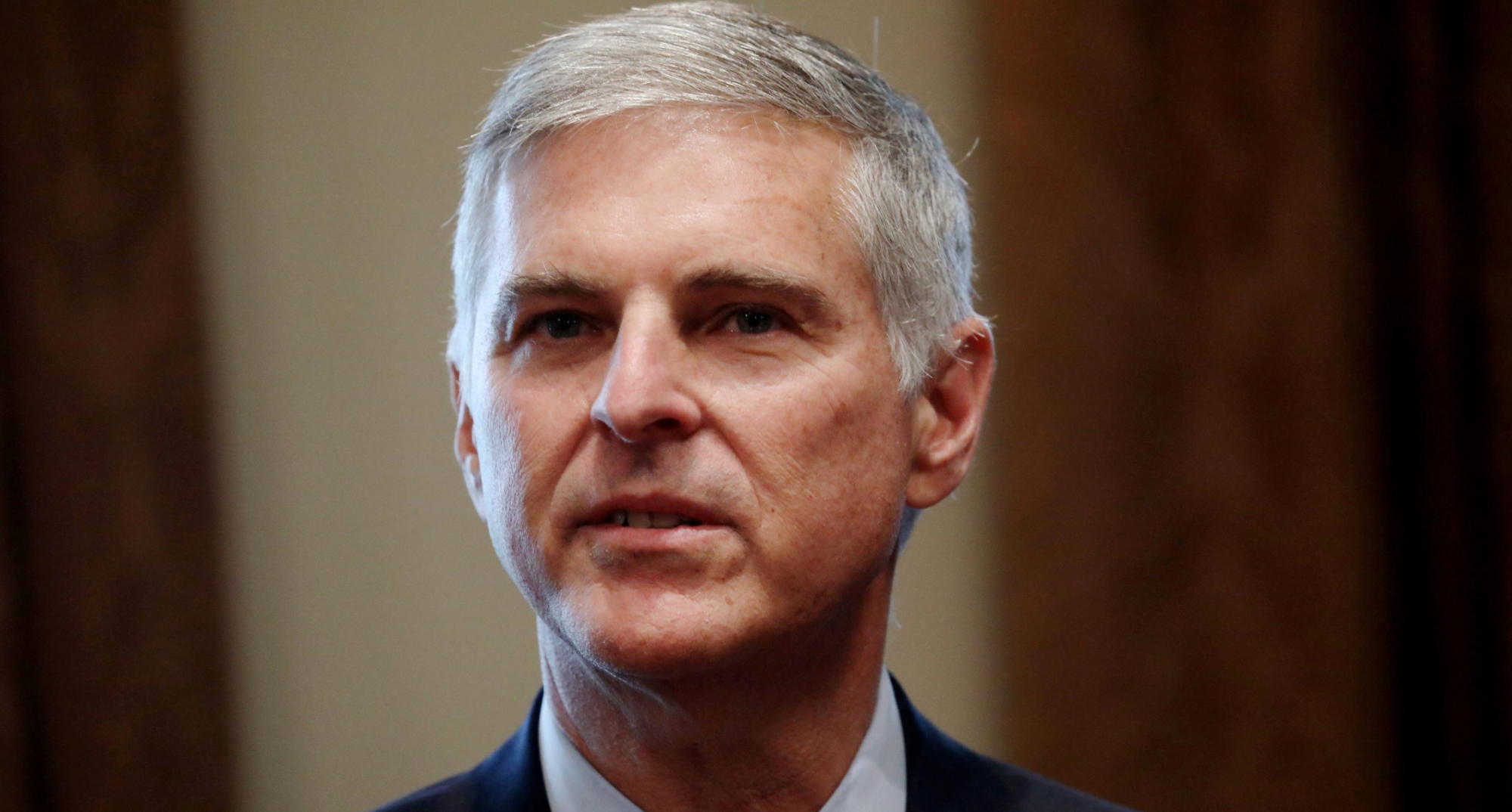 Above photo: Christopher Nassetta, the President and CEO of Hilton, participates in a meeting between U.S. President Donald Trump and tourism industry executives on coronavirus (COVID-19) response within the Cabinet Room of the White House in Washington, U.S., March 17, 2020. Reuters/Leah Millis/File Photo.

New York/ Boston – Sonic Automotive Inc (SAH.N), which operates 95 U.S. car dealerships, started laying off and furloughing about a third of its workforce as the coronavirus pandemic crushed its sales. Then it changed its executives’ pay packages – handing them a multimillion-dollar windfall.

On April 10, Sonic’s board gave its top executives stock options to replace performance-based share awards, regulatory filings show. The options it gave Chief Executive David Smith, whose family controls the company, are now worth about $5.16 million – more than four times the value of the performance-based stock awards he got last year.

Some of Sonic’s terminated employees, meanwhile, face hard times. After a decade of buying and selling cars, Allan Nadohl, 74, said he was laid off in March and now relies on U.S. government retirement payments that don’t fully cover his bills in Los Angeles.

“Be a mensch,” Nadohl said, referring to Sonic executives with a Yiddish word meaning honorable person. “Take a 50% cut for six months.”

Sonic said in one of the filings that the changes were made in response to the pandemic, without elaborating. Neither the company nor Smith responded to requests for comment from Reuters.

In an April 21 filing, for example, Sirius XM said it “may be prudent” to change executive pay terms to ensure it can attract and retain “senior management talent.” Delta said in a filing that its performance measures no longer suited the “current reality” and that the value of executives’ incentive pay had declined by more than half in the pandemic.

Sirius XM did not comment in response to requests from Reuters, and Delta declined to comment. G-III and Signet said the changes were needed to retain management talent, while Build-A-Bear said the moves aligned the interests of executives with shareholders. Covia, Red Robin, Uber and Hilton said in filings that uncertainty arising from the pandemic caused them to revisit performance pay.

Thomson Reuters said in a filing that it had approved executive performance targets in February and early March without the benefit of being able to consider the pandemic’s impact on its business, which it said it would continue to monitor and assess. David Crundwell, a vice president for corporate affairs, referred to the filing and declined to comment further.

Reuters identified the companies by searching filings submitted to the U.S. Securities and Exchange Commission this year and finding those that mentioned the pandemic in the context of executive compensation. The findings are a sampling and do not include companies that may have changed executive pay without explicitly tying the moves to the pandemic.

“Otherwise, there is no point,” she said.

Others counter that the moves to protect executive pay might serve investors as well as executives.

“It’s critical to motivate the team and get through the crisis,” said Yonat Assayag, partner at pay consultant ClearBridge Compensation Group. “Through that lens, a lot of these decisions are very much aligned with shareholder interests.”

To be sure, many top executives will likely see their pay go down this year because of dwindling profits and lower share prices, and some companies’ compensation changes may not fully make up for the pandemic’s impact on executive pay.

More than 500 companies in the Russell 3000 index have announced cuts to the base salaries of their chief executives, to save money or show they are sharing workers’ pain, according to compensation consultant Semler Brossy. Base salaries, however, account for only a tenth of the median pay of chief executives at the largest 500 U.S. companies, according to research firm Equilar. They earn the bulk of their compensation through stock awards.

Giving Out Stock After Salary Cuts

Build-A-Bear, which sells customized stuffed animals, announced a 20% executive salary reduction in March as it furloughed more than 90% of its 4,300 workers. That translated to a cut of $142,800 from the $714,000 salary of CEO Sharon John.

Two weeks later, however, the company granted its top brass stock grants of roughly equivalent value to the salary cuts.

Build-A-Bear did not respond to requests for comment. In a securities filing on May 1, the company said the stock awards were made “to further align the interests” of executives and shareholders.

Many companies have not made decisions on whether and how to adjust executive pay amid the pandemic. Investors and corporate governance experts said they are watching closely.

“We will look very hard at the outcomes of 2020 awards,” said Hans-Christoph Hirt, head of the stewardship and engagement arm of asset manager Federated Hermes, which has $606 billion in assets under management. “We wouldn’t want to see targets lowered on the fly.”

Vanguard, the world’s largest mutual fund firm, said on its website earlier this month that it was not appropriate for boards to create “easier” executive performance targets, despite the challenging environment.

Sonic moved to protect executive pay on April 10, a few weeks after it started layoffs and furloughs of what would eventually total about 3,000 employees, company filings show.

The previous pay plan would have awarded stock to executives based on earnings. Sonic replaced it with options that gave executives the right to buy company stock, starting in 2021, at the beaten-down price the shares hit on April 9 of this year – at the height of the pandemic, when their value had been halved from their most recent peak.

Sonic’s shares have risen 67% since April 10, as much of the stock market has recovered on the Federal Reserve’s intervention and massive government stimulus spending. Smith said on the company’s first-quarter earnings call on April 30 that sales had dropped about 40% year-on-year since the start of the pandemic.

Covia, a materials supplier to the energy industry, has cut at least 7% of its workforce of about 2,662 employees in the crisis. The company said that the pandemic and volatile oil markets had “rendered obsolete” its performance-based incentive program for executives, including CEO Richard Navarre. Instead, the company’s board approved payments to the top executives equaling what they would have earned if they had achieved their 2020 performance targets.

For Navarre, this amounted to a $4.36 million immediate payout. A Covia spokesman declined to comment on behalf of the company and Navarre.

Other firms made more modest changes that cushioned the blow for executives without making them whole for any pandemic-related loss of pay.

DKNY’s parent G-III Apparel switched from performance-based to time-based share awards, assuring pay for executives who remain with the company for three years. The company said in a regulatory filing that the “significant retention benefit” outweighs any concerns over removing performance requirements from the grants.

G-III CEO Morris Goldfarb, who owns about 8% of the company, had earlier given up a $1 million annual cash salary as part of steps the firm said it took to increase “financial flexibility.” The company also said that cash incentive payments to Goldfarb – which accounted for about 70% of his $16.6 million total pay last year – could be reduced this year because of the pandemic’s impact on company performance.

Removing the performance requirement from Goldfarb’s stock awards will protect a substantial portion of his pay. Last year, he earned $4 million in performance-based shares; this year, the changes give him $3.7 million in time-based shares.

G-III furloughed and laid off between 60% and 80% of employees, depending on the segment of its wholesale and retail operations.

A G-III spokesman said the new arrangement was made “in recognition of record-breaking results” in the 12 months ending in January and to assure stability in management.

Signet Jewelers is also giving executives more shares based on time, and less on performance, which could help blunt the impact of the economic crisis on their pay. Time-vesting shares made up 35% of executives’ long-term incentive plan before the pandemic, with the balance of the stock awards linked to profitability measures. The new structure gives time-vesting and performance shares equal weighting. The changes mean Signet CEO Virginia Drosos would get $900,000 more in time-based stock awards for this year if Signet maintains compensation targets it used for the previous fiscal year, ended Feb. 1.

The jeweler also cut top executives’ base cash salaries by half, including that of Drosos, who last year received $1.5 million in base salary. But the firm said in a filing that it will also award executives additional shares worth about a quarter of their cash salary.

More than half of Signet Jewelers’ about 23,000 employees in North America have been furloughed, according to a company spokesman.

Nancy Reardon, who chairs Signet’s compensation committee, said the changes were meant to retain management talent and give executives “fair and realistic” goals in light of the pandemic. Company spokeswoman Colleen Rooney said the company had business reasons beyond the pandemic for changing executive compensation and that the adjustments could translate to lower pay if the company performs well.

Red Robin said on April 14 that it would eliminate 50 restaurant support positions and cut pay by 20% for support and supervision workers in response to the pandemic, matching an earlier 20% cut to executive base salaries. It also closed 35 of the 454 restaurants it operates and furloughed or re-assigned an undisclosed number of workers.

Red Robin said in an April 8 regulatory filing that it replaced targets based on company earnings with metrics that compare performance to corporate peers, which faced similar challenges in the pandemic. The change likely will reduce the pandemic’s impact for CEO Paul Murphy, who negotiated a cash-and-stock package estimated at $7 million annually when he joined the company in October.

In a filing, the company called the changes appropriate given the economic uncertainty and the difficulty in crafting new metrics. A company spokesman declined further comment.

Reporting by Ross Kerber in Boston and Jessica DiNapoli in New York; Editing by Greg Roumeliotis and Brian Thevenot.