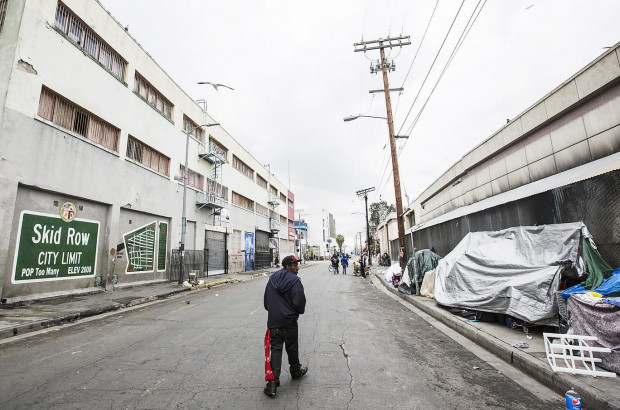 US Has Regressed To Developing Nation Status, MIT Economist Warns

Above Photo: Skid Row in downtown Los Angeles. Skid Row has LA’s largest concentration of homeless people who regularly camp on the sidewalks in tents and cardboard boxes Getty Images

America is regressing to have the economic and political structure of a developing nation, an MIT economist has warned.

Peter Temin says the world’s’ largest economy has roads and bridges that look more like those in Thailand and Venezuela than those in parts of Europe.

In his new book, “The Vanishing Middle Class”, reviewed by the Institute for New Economic Thinking, Mr Temin says the fracture of US society is leading the middle class to disappear.

The economist describes a two-track economy with on the one hand 20 per cent of the population that is educated and enjoys good jobs and supportive social networks.

On the other hand, the remaining 80 per cent, he said, are part of the US’ low-wage sector, where the world of possibility has shrunk and people are burdened with debts and anxious about job security.

Mr Temin used a model, which was created by Nobel Prize winner Arthur Lewis and designed to understand developing nations, to describe how far inequalities have progressed in the US.

When applied to the US, Mr Temin said that “the Lewis model actually works”.

He found that much of the low-wage sector had little influence over public policy, the high-income sector was keeping wages down to provide cheap labour, social control was used to prevent subsistence workers from challenging existing policies and social mobility was low.

Mr Temin also claims that this dual-economy has a “racist” undertone.

“The desire to preserve the inferior status of blacks has motivated policies against all members of the low-wage sector.

“We have a structure that predetermines winners and losers. We are not getting the benefits of all the people who could contribute to the growth of the economy, to advances in medicine or science which could improve the quality of life for everyone — including some of the rich people,” he writes.

Commenting on Mr Temin’s findings, Lynn Parramore, senior research analyst at the Institute for New Economic Thinking, writes: “Without a robust middle class, America is not only reverting to developing-country status, it is increasingly ripe for serious social turmoil that has not been seen in generations.”

Mr Temin says that education is the solution to offer everyone in society better opportunities and calls for investments in public schools and public universities.

He says: “Knowing how to think, how to get on with people, how to cooperate. All the social skills and social capital … [are] going to be critically important for kids in this environment.”