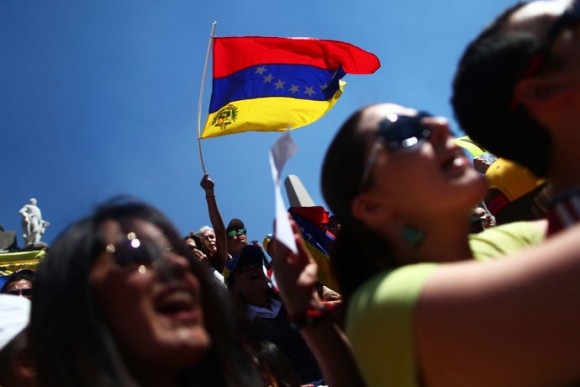 The bill is applicable to all manner of felonies and misdemeanors committed since January 1, 1999, including “damage to the national electrical system”, “violence or resistance to authority” and even “conspiracy and terrorism”, provided that these crimes were perpetrated in the course of “demonstrations, protests, or meetings for political purposes”.

The opposition’s Amnesty Law even goes as far as to list specific incidents that qualify for amnesty, ranging chronologically from the 2002 US-sponsored coup to the 2014 violent opposition protests known as guarimbas.

In short, the law amounts to a hand-written confession of seventeen years of right-wing terror aimed at overthrowing the country’s democratically-elected Chavista government.

According to the high court, the legislation would enact a “scandalous impunity to the detriment of public morals, subverting the ethical and juridical order of the country”.

Despite the entirely reasonable character of this objection, the ruling was nonetheless derided as yet more evidence of Venezuela’s authoritarian collapse by of the self-anointed ideological guard-dogs of liberal democracy.

Given HRW’s highly dubious track record on Venezuela, it is unsurprising that they would categorize as “legitimate” universally outlawed offenses such as “individual terrorism”, “use of minors to commit crimes”, and “mutiny, civil rebellion, treason, military rebellion”.

In regurgitating the law’s perverse logic that these felonies merit amnesty since they were committed with “political purposes”, HRW’s alleged human rights advocacy begins to look more and more like a naked apology for anti-government political violence in Venezuela.

Even more predictable was the response of the Washington Post– the mouthpiece of the US neoconservative establishment– which in a recent editorial cited the Supreme Court ruling in its case for “political intervention” in Venezuela as if US imperial interference in the South American country’s internal affairs was not a long established practice over the last 17 years of leftwing Chavista governance.

Of course, the Western interventionist chorus would be incomplete without the US State Department weighing in on the matter.

In the lead-up to the parliamentary vote on the bill, Undersecretary of State for Western Hemisphere Affairs Roberta Jacobson met with Lilian Tintori, the wife of jailed far right politician Leopoldo Lopez, issuing a call for the “immediate release” of those she termed “political prisoners”.

Absent from her statement was any mention of the fact that Lopez was formally convicted of leading 2014’s violent anti-government protests known as “the exit”, which resulted in 43 dead and hundreds injured, the majority of whom passerby and state security personnel.

An Excess of Judicial Independence?

Following the ruling, the US State Department released its 2015 human rights report in which the body sharply castigated Venezuela for its alleged “lack” of judicial independence as well as its “use of the judiciary to intimidate and selectively prosecute government critics”.

For a moment, let’s bracket the obscene hypocrisy of these accusations coming from a country that has produced such shining examples of judicial independence such as Bush v. Gore and Citizens’ United and whose judiciary has gone to incredible lengths to guarantee due process to political prisoners such as Leonard Peltier, Mumia Abu Jamal, and Oscar López Rivera.

Let us be clear: Washington’s problem with the Venezuelan Supreme Court is not its lack of independence, but rather that it is too independent from the country’s neo-colonial oligarchy that it refuses to follow their dictates.

Prior to Chávez, a man of the aristocratic stature such as Leopoldo López– the Harvard-educated son of one of Venezuela’s wealthiest families– would never face conviction for his crimes, which include publicly inciting the violent ouster of the democratically-elected government.

In the eyes of the West, what is thus intolerable about the Supreme Court decision to strike down the Amnesty Law and uphold the conviction of López and dozens of others is not its supposed violation of the rule of law, but its full application against the most powerful elements of Venezuelan society.

In a word, the mortal sin of Venezuela’s judiciary was to defy the hegemonic ideology of liberal democracy for whom equality before the law is treated as a mere formalism that is professed but never practiced.

In this regard, the Venezuelan Constitution states that, “The law will guarantee the juridical and administrative conditions so that equality before the law is real and effective…it will especially protect those persons… who find themselves in circumstances of clear weakness and will punish the abuses and mistreatment committed against them.”

This conception of legal equality as a radical defense of the weak and oppressed openly clashes with the liberalism enshrined in the US Constitution in which the principle of “equal protection of the laws” codified in the 14th Amendment is formal in character, lending itself to appropriation by corporations who secured the right to personhood long before African-Americans.

Within this framework, the Venezuelan Supreme Court found that the Amnesty Law is unconstitutional primarily because it amounts to a sanctioning of “contempt for the life, integrity, and dignity of… those harmed by the amnestied acts, affecting their right to access justice.”

That is, the high court ruled that the rights of the victims of right-wing terror– mostly black, brown, and poor– take precedence over the privileges of the perpetrators, much to the outrage of the Venezuelan oligarchy and its US imperial masters.

What is at stake here is not some local politicized skirmish over separation of powers but a profoundly universal ethical dispute over what kind of world we want to live in: one in which the normative order guarantees the life and human dignity of the oppressed, or alternatively one in which their oppressors are given carte blanche to murder and terrorize.

Venezuela’s Supreme Court has been crucified by the powers at be for unacceptably choosing the former.