US is Behind Hong Kong Protests Says US Policymaker

Above Photo: From Journal-neo.org

The US continues to deny any involvement in ongoing unrest in China’s special administrative region of Hong Kong.

However, even a casual look at US headlines or comments made by US politicians makes it clear the unrest not only suits US interests, but is spurred on almost exclusively by them.

The paradoxical duality of nearly open support of the unrest and denial of that support has led to headlines like the South China Morning Post’s, “Mike Pompeo rebukes China’s ‘ludicrous’ claim US is behind Hong Kong protests.” The article claims:

US Secretary of State Mike Pompeo has said it is “ludicrous” for China to claim the United States is behind the escalating protests in Hong Kong.

Pompeo rebuked Chinese foreign ministry spokeswoman Hua Chunying, who had claimed violent clashes in the city prompted by opposition to the Hong Kong government’s controversial extradition bill were “the work of the US”.

However, even US policymakers have all but admitted that the US is funnelling millions of dollars into Hong Kong specifically to support “programs” there. The Hudson Institute in an article titled, “China Tries to Blame US for Hong Kong Protests,” would admit:

The article would then quote Pillsbury as saying:

We have a large consulate there that’s in charge of taking care of the Hong Kong Policy Act passed by Congress to insure democracy in Hong Kong, and we have also funded millions of dollars of programs through the National Endowment for Democracy [NED] … so in that sense the Chinese accusation is not totally false.

A visit to the NED’s website reveals an entire section of declared funding for Hong Kong specifically. The wording for program titles and their descriptions is intentionally ambiguous to give those like US Secretary of State Mike Pompeo plausible deniability.

Johnson Yeung Ching-yin, from the Civil Human Rights Front, was among 49 people arrested during Sunday’s protest – deemed illegal as it had not received police approval – in Central and Western district on Hong Kong Island. 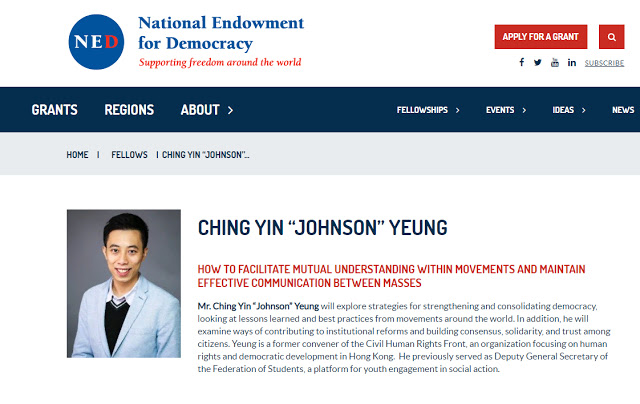 The article would omit mention of Johnson Yeung Ching-yin’s status as an NED fellow. His profile is – at the time of this writing – still accessible on the NED’s official website, and the supposed NGO he works for in turn works hand-in-hand with US and UK-based fronts involved in supporting Hong Kong’s current unrest and a much wider anti-Beijing political agenda.

Johnson Yeung Ching-yin also co-authored an op-ed in the Washington Post with Joshua Wong titled, “As you read this, Hong Kong has locked one of us away.”

Wong has travelled to Washington DC multiple times, including to receive “honors” from NED-subsidiary Freedom House for his role in leading unrest in 2014 and to meet with serial regime-change advocate Senator Marco Rubio.

It should also be noted that the Washington Post’s Anne Applebaum also sits on the NED board of directors. 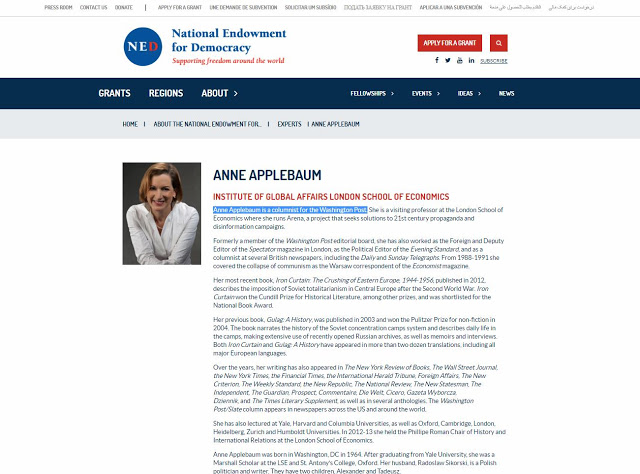 This evidence, along with extensively documented ties between the United States government and other prominent leaders of the Hong Kong unrest reveals US denial of involvement in Hong Kong as yet another willful lie told upon the international stage – a lie told even as the remnants of other victims of US interference and intervention smolder in the background.

The direct ties and extreme conflicts of interest found under virtually every rock overturned when critically examining the leadership of Hong Kong’s ongoing unrest all lead to Washington. They also once again reveal the Western media as involved in a coordinated campaign of disinformation – where proper investigative journalism is purposefully side-stepped and narratives shamelessly spun instead to frame Hong Kong’s ongoing conflict in whatever light best suits US interests.

What’s worse is big-tech giants like Facebook, Twitter, and Google purging thousands of accounts attempting to reveal the truth behind Hong Kong’s unrest and the true nature of those leading it. If this is the level of lying, censorship, and authoritarianism Washington is willing to resort to in order for Hong Kong’s opposition to succeed, it begs one to wonder what this so-called opposition is even fighting for. Certainly not “democracy” or “freedom.”