US Launches Brazen Interventionist Plan to Overthrow The FSLN

Above photo: Sandinistas and followers of President Daniel Ortega wave their Sandinista flags in a march for peace, in Managua, Nicaragua from The Morning Star. This was a pre-COVID rally as there have been no marches or concentrations of any kind since March 15, before the first case of COVID.

An orchestrated plan financed by the United States to overthrow the democratically elected Nicaragua government during the next two years was leaked in a document from the US embassy and presented July 31, 2020, by Nicaraguan journalist William Grigsby on his political analysis program “Sin Fronteras”, and as an article on Radio La Primerísima website.

Grigsby says the new destabilization plan is in response to the fact that the US realizes President Daniel Ortega will win the November 2021 elections. The 18-page document is RFTOP No: 72052420R00004, with the title RAIN or Responsive Assistance in Nicaragua. 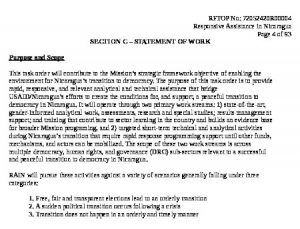 It is a “Terms of Reference” contract used to hire a US company (like the descendants of Blackwater) to take charge of the plan. The company will direct local actors to disrupt public order and carry out other [violent] actions before, during and/or after the 2021 elections.

The funds to implement this plan were allocated through the International Development Agency (AID) which is also the US institution that has provided the most money openly in recent years to the Nicaraguan opposition for coup-related activities.

The document establishes three scenarios that they call “democratic transition in Nicaragua:”

“RAIN will pursue these activities against a variety of scenarios generally falling under three categories: 1. Free, fair, and transparent elections lead to an orderly transition [the US candidate wins] 2. A sudden political transition occurs following a crisis [a coup leads to a US-backed government] 3. Transition does not happen in an orderly and timely manner. The regime remains resilient in the face of domestic and international pressure. It is also possible that the regime may remain in power following electoral reforms and a fair election, but without changes to the rule of law or democratic governance [i.e., without changes that benefit US corporations].”

The document reveals that the U.S. government realizes it is a good possibility that the FSLN party will win the 2021 elections in a transparent manner that receives international approval.

The document says that the purpose of hiring the company is to create the conditions for a “democratic transition” in Nicaragua involving the media, businessmen, non-governmental organizations, and students, just like the 2018 failed coup attempt.

Another section states that if the opposition were to win the elections that the new government must immediately submit to the policies and guidelines established by the United States. This scenario includes persecution of Sandinistas, dissolving the National Police and the Army, among other institutions.

The document calls on its actors to try to deepen political and economic problems taking into account the context of the Covid-19. Since March the US-directed opposition has focused 95% of their actions on attempting to discredit Nicaragua’s prevention, contention, and Covid treatment. However, this only had some success in the international media and is now backfiring since Nicaragua is the country with one of the lowest mortality rates in the continent.

On July 31 a fire was set to the Christ on the Cross known in Nicaragua as the “Sangre de Cristo” in the Managua Cathedral and the Catholic leadership is calling it a terrorist action and blaming the Sandinistas. This is likely the first false flag operation under the new program RAIN. In the detailed police investigation, they found that the priests had turned off security cameras. They also found no evidence of it having been an industrial or even a homemade bomb. They appear to have used what was in this chapel – alcohol in a plastic bottle and lit candles. To get into the Cathedral and this particular area, there is always a priest or nun present.

Despite the amount of money that the opposition has received from the United States, more than 31 million dollars between the end of 2017 and May 1, 2020, the document laments that the opposition is not unified around a political party or candidate. And the plan contemplates abrupt changes and the ability to respond quickly to “install a new government.” The document also states that “conflicts often arise between peasant groups and the rest of the opposition, and students often distrust business leaders.”

Confident that there will be a coup d’état in Nicaragua, USAID writes that the best option may be to have the opposition refuse to participate in elections (which is what happened in 1984 because of the US direction). The possibility that the current Sandinista government will win the 2021 elections even after electoral forms is repeated various times.

Under this type of situation, the company hired by USAID must be prepared to respond immediately in directing civil society to implement more destabilization actions.

The document also details the participation of the United States Embassy in Managua, which will be in charge of executing a series of diplomatic actions such as the creation of a commission to legitimize a new government-imposed by overthrowing the Sandinistas.

As it is clear that to the US that the FSLN will be victorious, USAID proposes a “delayed or unforeseen transition of government” where it seeks to create a political and economic crisis.

The document was written in March or April of 2020 when they supposed the Covid Pandemic would cause great stress on the Nicaraguan health system and that this would be one way to bring about a “crisis” and exert “pressure.” “Once a great health, political and economic crisis is created in Nicaragua,” USAID intensifies its new programmatic strategy, which will lead to destabilizing the country. In other words, their plan counted on the development of “unrest” in the population from Covid-19 that could be utilized.

The set of assumptions laid out in the document is what the company hired by the United States is to base their disruption action plans on with civil society in order to succeed; it calls on the opposition and the exiles to carry out actions of interference in a unified way.

Finally, the document makes it clear that the people of Nicaragua will be left without basic services as a result of the coup d’état orchestrated and financed by the United States, while they plan for organized crime to increase.

See the text of the USAID document here.