Above photo: Screenshot of The Guardian.

U.S. media went crazy today over a rumor from South Korea which said that the North Korean leader Kim Jong Un was near to death: 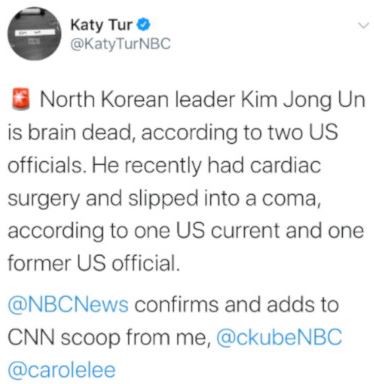 US is monitoring intelligence that North Korean leader Kim Jong Un is in grave danger after surgery, according to a US official https://cnn.it/2KkCVphThe New York Times @nytimes – 4:00 UTC · Apr 21, 2020

What the CNN, NBC News and the NY Times did not say is that the ‘South Korean media report’ over grave illness of Kim Jong Un, on which their reporting was based, came from the Daily NK website and was itself based on a single anonymous source allegedly from North Korea.

The South Korean and the Chinese government have both rejected the reports:

Two South Korean government officials rejected an earlier CNN report citing an unnamed U.S. official saying Washington was “monitoring intelligence” that Kim was in grave danger after surgery, but they did not elaborate on whether Kim had undergone surgery. The presidential Blue House said there were no unusual signs coming from North Korea.

An official at the Chinese Communist Party’s International Liaison Department, which deals with North Korea, told Reuters the source did not believe Kim was critically ill. China is North Korea’s only major ally.

Chinese foreign ministry spokesman Geng Shuang said Beijing was aware of reports about the health of Kim, but said it does not know their source, without commenting on whether it has any information about the situation.

The report was bad for the South Korean markets:

South Korean shares exposed to North Korea tumbled and the Korean won fell on the reports. The won traded down more than 1% against the dollar even as South Korean government sources said Kim was not gravely ill.

The DailyNK has since published a correction. It now says that Kim might have had a heart problem but is recovering well. The NBC News correspondent Katy Tur deleted her tweet out of a laughable ‘abundance of caution’.

When they published the sensational claims none of the western reports mentioned that the DailyNK is not a regular news outlet. It is a website in Seoul which is run by defectors from North Korea. It has for years been financed by the U.S. government through the National Endowment for Democracy which is a CIA offshoot. From the NED’s 2018 grant report:

To raise awareness and understanding of the conditions in North Korea by disseminating accurate, timely, and relevant news and information about the country. The project will produce an online newspaper serving readers in South Korea and the international community and will provide journalism training to North Koreans working as citizen journalists as well as ongoing professional development for its regionally-based correspondents and stringer reporters.

The DailyNK is a run of the mill U.S. propaganda organization which prepares for a U.S. ‘regime change’ operation in North Korea.

When U.S. officials claimed they were ‘monitoring intelligence’  about Kim Jong Un’s health they meant that they were reading the fake news the people at the desk next to them just had produced.

Having been caught falling for a CIA rumor mill report the New York Times engaged in a Trump-like move and blamed North Korea for its false reporting: Speculation Over Kim Jong-un’s Health Is Fueled by North Korea’s Own Secrecy.

There might be malicious intent behind the initiation of today’s rumor. South Korean President Moon Jae-in is not well-liked by U.S. North Korea hawks. Last week Moon’s ruling party won an absolute majority in the parliamentary elections. The landslide win came after much success during the recent efforts to contain the novel coronavirus in South Korea.

There is a silent war between the Trump administration, represented by the hawkish U.S. ambassador in Seoul Harry Harris, and the Moon government.

Trump is demanding that South Korea pay $5 billion per year for the stationing of U.S. occupation troops in the country. That is five times more than South Korea currently pays. South Korea has rejected such a hefty increase and the U.S. furloughed 5,000 South Korean workers who were employed on its bases. The negotiations have since stalled.

Ambassador Harris has engaged in sabotage of South Korean policies. Here is just one example. The country recently acquired a Global Hawk reconnaissance drone but wanted to keep that a secret. Despite urgent requests for secrecy from the Moon government, Harris tweeted about the arrival of the drone:

US Ambassador Harry Harris disclosed the delivery of the Global Hawk (RQ-4), a US surveillance asset, to the South Korean military and shared a photograph of it despite efforts by South Korean military officials to dissuade him, it has been learned. Observers criticized his unilateral decision to disclose information about his host country’s military in defiance of its wishes as overstepping his authority as a diplomatic representative.
…
Many in and around the military viewed Harris’s tweet as “irregular.”

“The Global Hawk is being introduced to South Korea through Foreign Military Sales (FMS) procedures supervised by the US government, but it is unquestionably a surveillance asset of the South Korean Air Force, not the US military,” said one military official.

“As a former commander of the US Indo-Pacific Command, Ambassador Harris may be quite interested in military issues, but it crosses a line for him to unilaterally disclose South Korean military information,” the official continued.

It would not be beyond Harris to launch rumors about North Korea’s leader if only to throw the South Korean government off-balance.