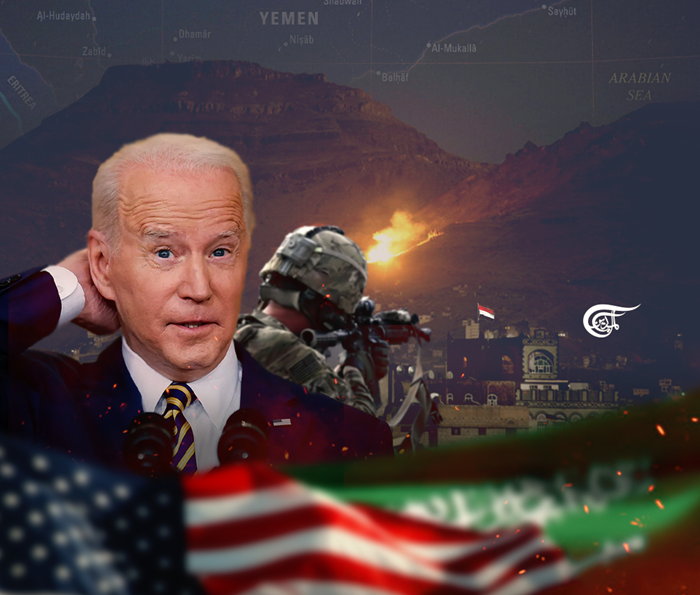 US Military Boosts Support For Saudi Arabia As It Bombs Yemen

Joe Biden claimed he would end the war on Yemen. Instead, the US military is expanding support for Saudi Arabia, on the seventh anniversary of a brutal bombing campaign that has fueled at least 377,000 Yemeni deaths.

The US government has increased its military support for Saudi Arabia as the Gulf monarchy’s war on Yemen marks its seventh anniversary.

This is a clear violation of President Joe Biden’s promise to end the US-backed Saudi war – a pledge he reiterated on the campaign trail in 2019 and 2020, and then again after he entered office in January 2021.

With US weapons and military assistance, Saudi Arabia has relentlessly bombed Yemen, the poorest country in West Asia, since March 26, 2015.

The United Nations estimated that at least 377,000 Yemenis have died as a result of this war, in a conservative estimate as of the end of 2021.

Approximately 70% of these estimated Yemeni deaths (264,000) were children under age 5, according to the United Nations Development Program.

But this bloodcurdling human loss has not stopped the United States from helping the Saudi monarchy kill more Yemenis.

The news wire revealed that the “United States has stepped up its military support for Saudi Arabia over the past few months following missile strikes on the kingdom by the Yemeni Houthi group, Western diplomats said, an indication that Washington is trying to mend its strained ties with traditional Gulf allies.”

Reuters noted that throughout most of this seven-year war, the US military has provided Saudi Arabia with “intelligence, training, and technical support on weapons systems to the coalition, along with refueling warplanes carrying out airstrikes.”

This support has continued under Biden, despite his promises to the contrary.

In a Democratic primary debate in November 2019, Biden declared that, as president, “I would make it very clear we were not going to in fact sell more weapons to them,” pledging to “end the sale of material to the Saudis where they’re going in and murdering children.”

“We were going to in fact make them pay the price, and make them in fact the pariah that they are,” he said of the Saudi monarchy.

As newly inaugurated president, Biden gave a speech on February 4, 2021, announcing that Washington was “ending all American support for offensive operations in the war in Yemen, including relevant arm sales.”

But Washington’s claim that it would only support so-called Saudi “defensive” operations in regard to Yemen was a deceptive political sleight of hand because the war is by its very nature an offensive one.

Yemen’s indigenous resistance movement, Ansar Allah, has indeed responded to Saudi aggression by launching counter-attacks on its northern neighbor, but it was the Gulf monarchy that initiated the war.

Even so, Biden has since walked back his mealy-mouthed promise to stop assisting Saudi offensive operations in Yemen. And his administration has sold Saudi Arabia large amounts of weapons.

Reuters acknowledged in its March 22 report that, “Faced with new geopolitical realities, Washington has approved missiles and an anti-ballistic defense system sales to Saudi Arabia, including 280 air-to-air missiles valued at up to $650 million.”

The news agency added that the US has also “sent Patriot missiles and other equipment over the last three months to the kingdom.”

Meanwhile, US weapons continue to be used to kill civilians in Yemen.

On January 21, Saudi Arabia launched three airstrikes on a detention center in Yemen’s northwestern Saada governorate. At least 91 people were killed and another 236 were wounded in the attack, using laser-guided bombs manufactured by top Pentagon contractor Raytheon.

The humanitarian organization Save the Children found that January 2022 was the deadliest month in Yemen since 2018.

After seven years of war, a Yemeni civilian is still being killed or wounded every hour on average.

One of the main reasons that Washington has ramped up its support for Riyadh in the middle of this bloodbath is simple geopolitics.

Saudi Arabia has gradually moved toward a more independent foreign policy, improving relations with Russia and China. This has led Washington to desperately try to discipline the Gulf monarchies, to push them firmly back into the Western camp.

After Moscow invaded Western ally Ukraine on February 24, the United States and European Union pledged to boycott Russian oil. Washington and Brussels have pressured Saudi Arabia, in particular, to boost production to make up for that lost Russian crude.

Riyadh has different priorities. It is even considering selling its oil to Beijing in the Chinese currency, the yuan.

This would challenge the power of the petrodollar, disrupting a historic arrangement that Washington made with Riyadh.

President Franklin D. Roosevelt spent his last Valentine’s Day, in 1945, on a warship off the coast of Egypt. There, he met with King Ibn Saud and made a fateful pact: the United States would protect the fledgling Saudi monarchy; in return, the kingdom would maintain stability in the global oil market.

For decades, as one of the world’s leading oil producers, Saudi Arabia has reinforced the petrodollar by selling its crude in dollars.

But that order is shifting, as US unipolar hegemony rapidly declines. And Washington is desperate to bring it back.

So, just as it is fighting to the last Ukrainian to wage a proxy war on Russia, the United States is more than willing to help Saudi Arabia bomb Yemen into oblivion if it means the US empire can stay on top.