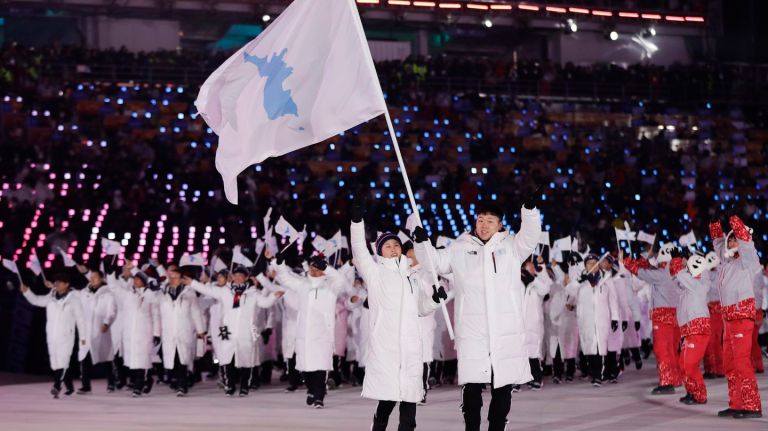 US Misses Opportunity For Peace Progress At Olympics

Above: North and South Korean athletes enter the olympic stadium together. Photo by Petr David Josek for AP.

Update: North Korean leader Kim Jong Un invited South Korean President Moon Jae-in to Pyongyang “at an early date.” President Moon has responded that the two countries should create the circumstances to allow such a meeting to take place. It is good to see the two Koreas moving forward in spite of US efforts to divide them.

The Politico article cited below has been updated to include the White House response to criticism of Vice President Pence’s behavior at the Olympics. The White House spin, which does not pass the straight face test as it is inconsistent with what occurred, is that the lack of communication between Pence and the North Koreans was mutual. It was only Pence who arrived late at the diplomatic dinner and did not stay for more than five minutes. Kim stayed for the entire dinner. It was only Pence who shook all hands in the room except for Kim Yong Nam. It is good news that the White House felt it had to do something to correct the perception that the vice president behaved poorly in his lack of interaction with the North Koreans. The White House noticed that the world noticed Pence’s lack of diplomatic behavior.

TIME Magazine also noted Pence’s poor diplomatic performance describing it as “falling flat.”  They write “South Korean President Moon Jae-in called “Olympic games of peace” and the U.S. appeared to be the one left out in the cold.” They summarized the faulty diplomacy writing “As it turned out, with the two Koreas celebrating a moment of unity, the United States was left outmaneuvered by an adversary and out of step with an ally.”

Pence’s poorly handled visit to South Korea may inadvertantly help progress for peace in the Koreas. The US showed by Pence’s boorish and childish behavior that it is not mature enough to be part of resolving the conflict in Korea. The Pence behavior gives Moon further flexibility in pursuing his own path to postive relations with North Korea. The North Korean and South Korean presidents pursuing a face-to-face meeting makes it more difficult for the US to proceed with its “bloody nose” strategy. It makes it more difficult for the US attack North Korea when the two countries are in peace talks. If the US is further sidelined as a result of Pence’s behavior toward North Korea at the Olympics it is a good thing as the US prevents progress. Pence may have helped make the United States less relevant.

At a carefully planned dinner to honor Kim Yong Nam, the North Korean president’s sister, and Vice President Mike Pence, South Korean President Moon said that he hoped the Winter Olympics would be remembered as the “day peace began.” But, Vice President Mike Pence did his best to make sure that did not happen. He missed the opportunity created by Moon to further peace on the Korean peninsula. The historic opening created by North and South Korea at the Olympics was an opportunity, but Pence handled the situation like a childish teenager.

At a dinner reception where President Moon sought an opportunity for dialogue between the US and North Korea, Pence went to great lengths to avoid talking to the North Koreans. According to Reuters, when Pence arrived late to the reception, he told Moon he planned to leave directly after a photo session, but Moon asked him to “come and say hello to friends.” Moon was trying to create a dialogue to advance peace but Pence went around the table and shook hands with everyone except Kim Yong Nam of North Korea.

So Pence went around the table and greeted/shook hands with everyone – except North Korea’s Kim Yong Nam, who was sitting between the UN sec-gen Guterres and IOC chairman Bach

Reuters reports that Moon said, “There are some who would not want to be in the same room together if it wasn’t for the Pyeongchang Winter Olympics. But what is more important than anything is that we are together.” That seemed to be a statement that described the behavior of Pence. The mainstream political media outlet Politico described it as a close call for Pence:

Vice President Mike Pence’s Olympic visit to Pyeongchang, South Korea, began Friday with a close call with the North Korean officials, whom the vice president appeared to avoid at a diplomatic reception before the opening ceremonies.

Since Pence arrived at the dinner late, the seating plan was shuffled. Pence again missed an opportunity created by Moon. Originally, the seating plan showed Pence, with his wife to the left and Moon to his right, seated across the round table from Kim, who was nestled between U.N. Secretary General António Guterres and International Olympics Committee President Thomas Bach’s wife. Kim’s visit is significant as she is the first member of North Korea’s ruling family to enter South Korea since 1953. Who knows what kind of conversation could have occurred that furthered the peace process, but Pence avoided the opportunity.

The initial seating plan for the Olympic reception for VIPs had @VP Pence sitting next to South Korean president Moon and opposite North Korea’s head of state, Kim Yong Nam, @Reuters reports. Then Pence decided not to join the dinner. https://t.co/BHSVm6KdYG pic.twitter.com/AoEVAmlyAr

Pence left the event after five minutes. Reuters reports that Pence missed the symbolic desert, called “A Plate of Hope,” a “dark chocolate tempered in the shape of barbed wire lay over a map of the Korean peninsula rendered in thin blue chocolate, a representation of the heavily militarized border that separates Games host South Korea and its old enemy in the North.” 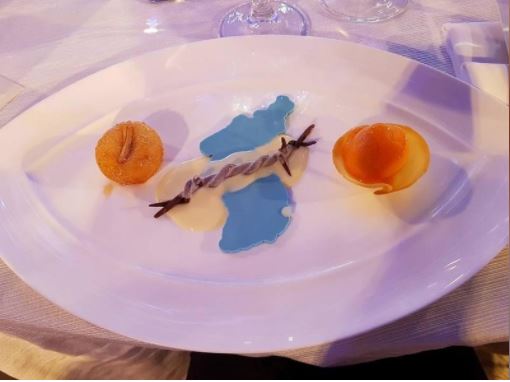 At the Olympic stadium, Pence sat one row in front of the North Koreans. Even though Kim Jong Yo was very close to him, Pence did not even try to speak to her.  The pool report for the media was that Pence had “no interaction” with Kim Jong Yo. New York Magazine described it as Pence “avoiding eye contact” with the Korean leader.  Another missed opportunity for peace.

While Pence was present, South Korean President Moon Jae-in shook hands with Kim Yo Jong, creating a historic moment and a photograph that gave hopes to many for peace between North and South Korea and movement toward unification and an end of hostilities. 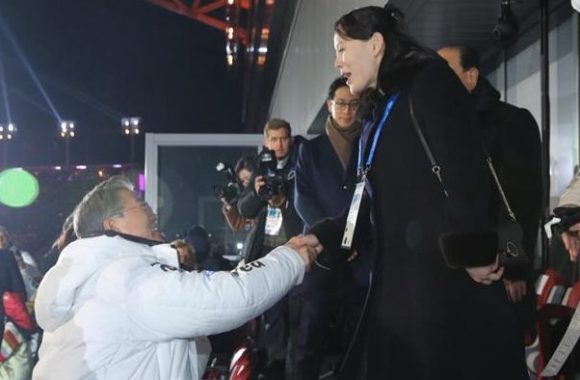 Another show of unity occurred when two members of the Unified Korean Hockey Team, one from the North and one from the South, carried the Olympic torch up the final flight of stairs in the opening ceremonies. They handed the torch over to figure skater Yuna Kim, a South Korean who won the gold medal in 2010 and the silver medal in 2014 who then lit the Olympic cauldron.

We recognize that these images of North and South Korea shaking hands and being friendly toward each other as well as of South and North Korean athletes walking into the Olympic stadium together do not ensure peace on the Korean peninsula. It is a long hard road to peace, much still needs to be negotiated. Peace is made more difficult with the US threatening a ‘bloody nose’, teenage bully talk for a military first strike, against North Korea. Pence exemplified the worst of US foreign policy with his childish behavior at the Olympics.