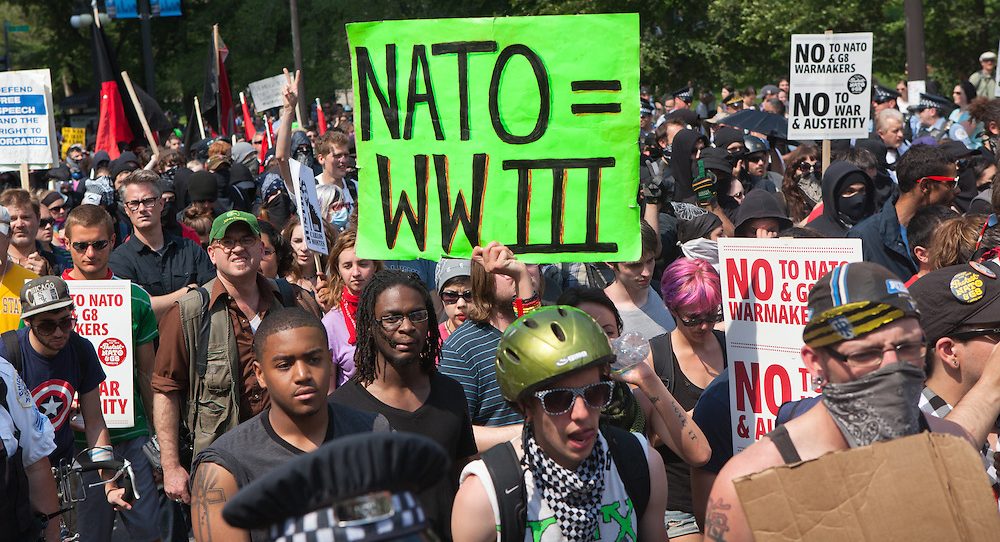 US, NATO, Russia, Ukraine And The Whiteness Of Empire

Since the turn of the century the US has marched steadily eastward across Europe with an occupation force called NATO. Supposedly a military alliance, NATO is really just the US plus its subordinate nations. It’s hostile to many peoples of the world in West Asia/Middle East, Africa and Latin America, but it’s especially preoccupied with Russians. NATO’s newest members include: Bulgaria, Estonia, Latvia, Lithuania, Romania, Slovakia and Slovenia (all joined 2004); Albania and Croatia (both joined 2009); Montenegro (joined 2017) and North Macedonia (joined 2020); Georgia and Ukraine (not quite joined).

With each NATO goosestep eastward, I imagine Russian military experts thought hard about the obvious existential threat; about the many published US strategic planning documents openly calling for destruction and dismemberment of Russia; about US readiness to drop nuclear bombs for a purpose as trivial as a tactical post-war advantage over Russia’s predecessor state, the USSR (Hiroshima, Nagasaki); about US willingness to consider dropping nuclear bombs just to win a war far away in a poor third world country (Korea, Vietnam). I imagine, after Russia thought about these dangers, it decided to back off rather than place in jeopardy the survival of humanity. So at each successive US territorial advance, Russia stepped back.

The US has poured weapons, military advisors, and political operatives into Ukraine for years. It has long coveted Ukraine for NATO. So in 2014 the US arranged a coup, with neo-nazi help, against the democratically elected president. The people in the Donbas region in the east resisted that coup and formed the Donetsk and Lugansk People’s Republics in self-defense. The illegitimate government in Kiev attacked them, aided by their neo-nazi militias and supported by the US. By the end of 2021 the war had cost 14,000 lives; 11,000 had been Ukrainians opposing the coup.

These Ukrainians resisted Kiev’s ban on their mother tongue, Russian; they resisted Kiev’s ethnic cleansing policies against Russophones; they resisted Kiev’s neoliberal, US-aligned politics. The war displaced millions, most of whom fled to Russia. The Donbas resistance got material help from Russia, but at the same time, for eight years, Russia tried to negotiate to keep the Donbas in a united Ukraine, to no avail. Since February 24 of this year, when Russian troops officially crossed the border, hundreds more Ukrainians have been killed or displaced. Predictably, it is only these latest war victims that western media notices at all, not the 14,000 Ukrainian war victims of 2014-2021.

Meanwhile, in this young century, the US and its vassals in the UK and Europe, sometimes in various military groupings like NATO, have been very busy elsewhere. The US tried but failed to completely destroy Syria and overthrow its popular government, partly because Russia and Iran sent troops to help defend the country. Still, the US controls a third of the country, where most of Syria’s oil and wheat fields are.

The US destroyed Iraq and Afghanistan, killing hundreds of thousands and destroying infrastructure necessary to modern civilization and human life: power, water treatment, medical services, communications. And the US/Saudi military assault on Yemen has killed nearly 400,000 in the last eight years, most of them children.

In this hemisphere, the US has executed coups against, destabilized, organized death squads against, and otherwise subverted, popular progressive governments, all in an attempt, sometimes successful, to put into power reactionary governments to serve US plutocratic interests and lessen the power and living standards of their populations: Haiti, Venezuela, Honduras, Paraguay, Nicaragua, El Salvador, Ecuador, Bolivia, Mexico, Brazil….

In Ukraine, Russia has now returned fire against US/NATO’s system of global genocide. The US has seen resistance before; it’s even lost wars before (Vietnam, Afghanistan). But this time the bullets come not from an impoverished third world country but from powerful Russia. That is what is new.

Sometimes you have to stop a bully even if, tragically, innocent people get hurt, because otherwise the bully will never stop.

Recently the UN General Assembly in Special Session approved a resolution condemning Russia for invading Ukraine. The resolution passed overwhelmingly: 141 countries supported it, 5 opposed it, 35 abstained, and some were absent.

Although the vote was indeed overwhelming, at least half the world’s population lives in countries that refused to vote for the resolution. China and India both abstained. Together they account for 2.8 billion of the world’s 7.9 billion people.

The 141 nations that voted to condemn Russia just happen to include all the western countries dominated by whites. These include the iconic, historic empires (“bullies,” if you will): England, US, France, Spain, Portugal, Italy, Netherlands. And like the white settler-colonists of South Africa, with this vote they have circled the wagons in a global laager. The lines have been drawn and the sides have been chosen.