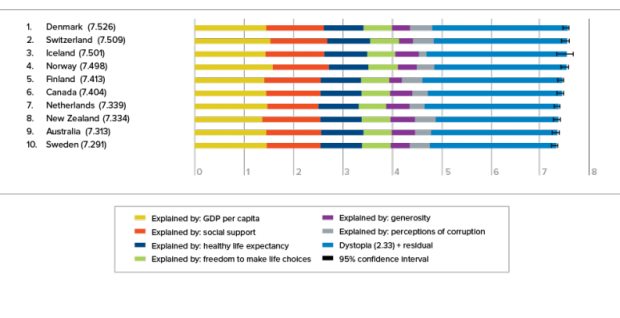 US Not In Top Ten Most Happiest, Is It Our Government?

Does the United States Need to Change It’s Form of Government to Become a Happy Nation?

Nations where there is more democracy, more participation and greater citizen power are common in the happiest nation’s on Earth

The Sustainable Development Solutions Network, a global initiative for the United Nations, released its annual report ranking how happy the people of our planet’s nations are. Here is a summary of the report.

Once again, Scandinavian nations dominated the top 10, with Denmark being the happiest, and Scandinavian nations capturing six of the top 10 spots. Once again, the United States failed to make the top 10, ranking only 13th despite being the wealthiest, most powerful nation on Earth. Once again, except for Canada, every nation in the top 10 has a system of national governance which uses proportional representation (PR) for its national legislature or legislatures. And Canada has a new prime minister, Justin Trudeau, who has vowed that his election, the most recent one, will be the last election Canada has with a two-party system.

I have pointed out previously that there is a relationship between having a modern constitutional design with proportional representation and happiness, that to achieve such a modern governmental design we need an advanced political consciousness, and that doing both of these is necessary to create a much wider policy debate, a greater variety of candidates and parties, and more political innovations.

In the slide show, take a look at the images which summarize the results. The first image shows the top 10 nations (see above chart). The next three images (image two, image three and image four) show the list of the 157 nations polled, ranked by happiness. The last three images (image five, image six and image seven) show the changes the nations of the world have for the better (first image in this set—image five) over the last decade, show the nations which have stayed nearly the same (second image of the set—image six), and show the nations which have gotten more unhappy (last image in this set, image seven). This last group of nations includes the United States. The graph shows how our nation has gotten more unhappy over the last decade from 2005-2007, compared to 2013-2015.

Just looking at the modern political systems in the top 10, it is easy to make the correlation between proportional representation and happiness, when 9 of the 10 have proportional systems, and the one which doesn’t, Canada, is planning to do so under its current government.

For Americans to take the lead in the world in happiness, it will take a real political revolution. Americans can thank Bernie Sanders for making that phrase respectable. Here are some looming questions this happiness study begs us to address:

Taking a look at this study and the governmental designs of the nations in the top 10 happiest nations on Earth is a way forward, away from raging national anger, towards enhanced national happiness. New Zealand did exactly that in 1993 when they used a national referendum to shift from their antiquated two-party system and adopted their multi-party system—Mixed Member Proportional (MMP)—which they reaffirmed in 2011 through another national referendum. The people of New Zealand spoke in one voice, collectively.

Here are more questions we can ask and answer for those who believe our nation should be a nation of the people, by the people, and for the people, as Lincoln asserted at Gettysburg:

Let’s not be victims of our 229-year-old political system. Instead, let’s just grow up and become citizen-leaders, and change it to our liking.

Kelly Gerling Ph.D. is a professional coach. He works to help individuals, visionary leaders and executive teams. Kelly uses professional coaching skills, NLP and insights from the cognitive and social sciences to inform his work. Kelly’s office is in Seattle, Washington. He holds an undergraduate degree in environmental resources, a master of science degree in human relations and counseling, and a doctorate in clinical psychology. You can reach him through his website at: www.kellygerling.com.