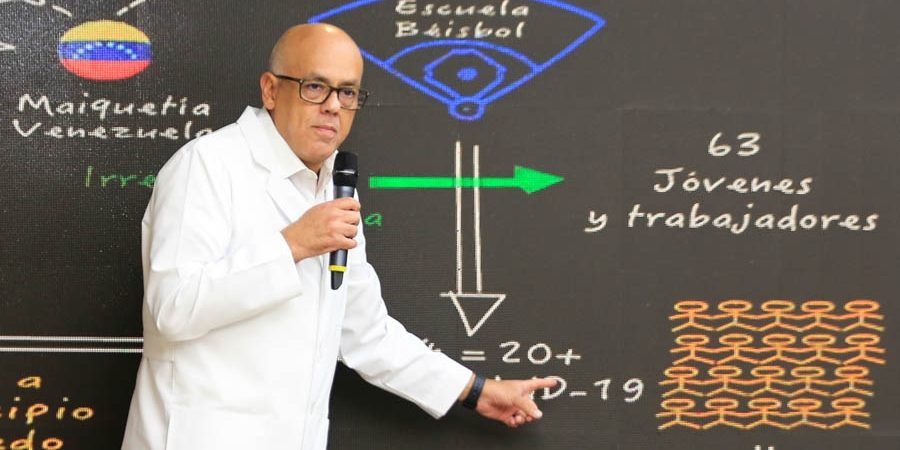 US ‘Plunders’ $342 Million Of Venezuelan Funds

Above photo: Communications Minister Jorge Rodriguez explains that the hotspot, which has caused 62 cases so far, was probably imported by academy directors arriving from the Dominican Republic. (AVN).

The money has been transferred from a Venezuelan Central Bank account at Citibank to an account at the US Federal Reserve.

Venezuela’s Central Bank (BCV) has accused the Trump administration of “vulgar plundering” after US $342 million was to be transferred out of its US-based Citibank account.

The transfer to the US government’s Federal Reserve was “approved” by Venezuela’s parallel parliament on Wednesday, which “requested” that the US Treasury Department’s Office of Foreign Assets Control (OFAC) authorise the transaction.

At the same session, the grouping led by self-declared “Interim President” Juan Guaido approved an unspecified “special budget” for “the liberation of Venezuela.”

Economist and Deputy Jose Guerra – who voted “remotely” from an undisclosed location abroad – wrote on Twitter that the funds originated from gold-for-cash swap deals carried out between the BCV and Citibank between 2013 and 2015.

He goes on to claim in 2017 that the BCV stopped paying interest on two of these swaps, leading to an “advanced cancelling” of the deal by the bank, and that the opposition took measures to “protect” the resources from financial vultures.

For its part, the BCV was quick to slam the move as “vulgar plundering” and a “fraudulent seizure” of the Venezuelan people’s assets. The Central Bank, which was blacklisted by OFAC in April 2019, promised to mount a legal challenge.

Washington’s recognition of Guaido in 2019 led to the seizure of several Venezuelan assets abroad, including US-based oil subsidiary CITGO, valued at US $7 billion, which was later passed to a Guaido-appointed ad hoc board of directors. In 2018, 14 tonnes of Venezuelan gold worth US $550 million were likewise held by the Bank of England.

The US Treasury Department has also imposed a series of punishing sanctions on Venezuela, including an embargo which threatens sanctions against individuals and firms of any nationality, including banks, which deal with Venezuelan state entities. The Caracas government has challenged these measures with legal action and has previously blasted Citibank, amongst other banks, for freezing its accounts.

While Venezuela continues to record significantly less coronavirus cases than other Latin American countries, it did report a sharp increase from 204 on Friday to 285 cases on Monday, with ten fatalities.

According to Communications Minister Jorge Rodriguez, a COVID-19 hotspot broke out at the Roberto Vahlis youth baseball academy on Margarita Island, Nueva Esparta State [north east Venezuela], which, together with a nearby coastguard center, has seen 62 cases so far.

Rodriguez explained that the probable origin of the hotspot was the arrival of three academy directors, as well as a Major League Baseball (MLB) scout, from the Dominican Republic on March 13, days before international flights were suspended.

Sporting activities with over 60 people at the academy, allegedly authorised by the local right wing governor, have illegally continued since a national lockdown was declared on March 17. Speaking Sunday, President Nicolas Maduro urged local authorities of all political parties to adhere to the quarantine with “efficiency” and “responsibility.”

Five academy directors were taken into custody on Saturday for breaking the quarantine and are due to be charged under the Law for the Protection of Children.

Following the localised outbreak, Maduro has applied a 4 pm to 10 am curfew on the entire island, as well as on Acevedo Municipality in Miranda State, where one of the young baseball players from Margarita travelled to to celebrate a MLB contract with family and friends. Targeted municipal curfews were also introduced in western border regions last week as authorities deal with the arrival of thousands of Venezuelan migrants.