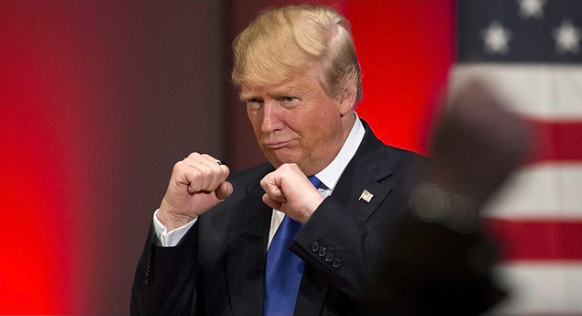 US Political Warfare Explodes Over Trump And Ukraine

The Trump White House came under renewed fire this week from Democratic Party opponents and the bulk of the corporate media after it was revealed that Trump had discussed with his Ukrainian counterpart an investigation into former Vice President Joe Biden and his son Hunter over the younger Biden’s business activities in Ukraine.

The discussion, which took place during a July 25 phone call with Ukrainian President Volodymyr Zelensky, was a blatant effort by Trump to enlist the support of a foreign government in gathering dirt on a Democratic presidential candidate reportedly viewed in the White House as Trump’s most dangerous opponent.

Whether or not such an action is legal, it certainly demonstrates the extraordinary lengths Trump is prepared to go in using the powers of the presidency against his political opponents. And there is the additional charge, even more explosive, that Trump directly threatened Zelensky with a cutoff of US military aid if he did not cooperate in the anti-Biden campaign.

According to press reports based on the initial leaks about the July 25 call, Trump did not discuss the US military aid in the call, but the White House did block the aid—initially approved by Congress last year—until September 12, only 18 days before the end of the current fiscal year. The Office of Management and Budget gave no reason for delaying release of the funds, citing only procedural problems, but the delay led to inquiries from both Democrats and Republicans in Congress and the introduction of legislation to compel release of the funds.

The Trump-Ukraine contact first came to light when an as yet unidentified intelligence officer monitoring the phone call between Trump and Zelensky filed a “whistleblower” complaint with the then-director of national intelligence (DNI), former Senator Dan Coats. The complaint was found to be “credible” and “urgent” by the inspector general for the intelligence agencies, Michael Atkinson, who sought to inform Congress, as required by law, but was blocked by acting DNI Joseph Maguire, who replaced Coats on August 16. Maguire consulted with the White House before taking that action and was backed by the Justice Department.

The complaint was leaked to the Washington Post last week, setting off a feeding frenzy in the media, with further reports, based on intelligence sources, tying the demand for an investigation into Biden and the holding up of US arms aid. By Sunday, the American media was in full flight, with columnists demanding Trump’s impeachment and charging him with extortion against Ukraine.

The White House and its defenders fired back, mainly at Biden and his son. Trump himself confirmed on Twitter that he had discussed the Bidens in his July 25 call with Zelensky, while at the same time declaring that all such president-to-president calls should be confidential—that is, they should not be monitored or screened in any way by US intelligence agencies, which Trump views, with good reason, as a hotbed of political enemies.

There is no question that Hunter Biden sought to cash in on his father’s political prominence during the Obama-Biden administration by serving as a go-between for business deals in China, Ukraine and other countries. Such corruption is standard practice in capitalist politics, emulated by Trump on an even greater scale as his family rakes in millions from foreign governments—and the US military as well—through the Trump Organization’s network of hotels and resorts around the world.

In Ukraine, Hunter Biden was aligned with the same forces as Trump’s own future campaign manager, Paul Manafort—the oligarchs associated with the pro-Russian President Viktor Yanukovych, who was ousted in a CIA-backed ultra-right coup early in 2014. The billionaire oligarchs sought out US intermediaries to help them reach advantageous business arrangements with the new US-backed government of Petro Poroshenko.

Hunter Biden was hired by a gas mogul, Mykola Zlochevsky, who had been a cabinet minister under Yanukovych. In April 2014, Zlochevsky put the younger Biden on the board of his company, Burisma Holdings, in what was a transparent effort to win favor in both Washington and Kiev. Despite this, the new government initiated a corruption probe into Burisma, one of many such investigations targeting oligarchs in the faction now out of favor.

In 2016, Joe Biden traveled to Ukraine and used the threat of a cutoff of $1 billion in US aid to force the Ukrainian government to sack its top corruption prosecutor. The alleged reason was displeasure in Washington with the slow pace of investigations into the pro-Russian faction. Biden was silent on the fact that one of these investigations might involve his younger son.

The strident Democratic Party-media campaign over the July phone call largely ignores this aspect of the conflict—the blatant influence-peddling by Hunter Biden—while blasting Trump for using the powers of the presidency and enlisting a foreign government to undermine a feared political rival. Biden’s opponents for the Democratic nomination have been vociferous in denouncing Trump, but notably cautious about defending the former vice president.

There is evident nervousness in the Biden campaign about the implications of the renewed media focus on Biden’s son, who has long been viewed as one of the candidate’s principal vulnerabilities. A memo to the press issued by the Biden campaign Saturday concluded with a boldface warning: “Any article, segment, analysis and commentary that does not demonstrably state at the outset that there is no factual basis for Trump’s claims, and in fact that they are wholly discredited, is misleading readers and viewers.”

The predominant line of argument, however, both from Biden and his fellow Democrats as well as their media propagandists, has been that Trump is guilty of an unprecedented act in seeking to recruit a foreign government to do his political dirty work. “This appears to be an overwhelming abuse of power,” Biden said in Iowa. “We have never seen anything like this from any president.”

House Speaker Nancy Pelosi, who has been blocking a full-fledged impeachment effort by the House Judiciary Committee, said in a statement, “If the President has done what has been alleged, then he is stepping into a dangerous minefield with serious repercussions for his Administration and our democracy.”

Many House and Senate Democrats went further, particularly citing the alleged quid pro quo of military aid for collaboration against Biden. “This is all impeachable,” Senator Brian Schatz (D-Hawaii) wrote on Twitter. “Not a close call. We need more facts, but we would be derelict in our duties not to pursue the facts wherever they lead.”

In a joint op-ed column in Sunday’s Washington Post, George Conway, the husband of Kellyanne Conway, one of Trump’s closest aides, and Neal Katyal, a former US solicitor general, urged Trump’s impeachment, calling him, using Watergate-style language, “a cancer on the presidency.”

The Post itself wrote in its own editorial: “If the accounts we’ve heard are accurate, Mr. Trump is guilty of a gross abuse of his office… For the president to use congressionally appropriated military aid as leverage to pressure another government to investigate one of his potential opponents in the 2020 election is a blatant misuse of power.”

For all these opponents of Trump within the US ruling class, the Ukraine affair is an opportunity to reassert the claims first made in the course of the anti-Russia campaign that sparked the long-running investigation by Special Counsel Robert Mueller. Pointing out Trump’s efforts to obtain the support of the Ukrainian government in the 2020 elections is intended to provide legitimacy for the bogus claim that support from the Russian government was responsible for Trump’s victory in the 2016 elections.

As the WSWS has repeatedly explained, the anti-Russia campaign is a conflict between two equally reactionary factions within the US ruling elite, driven largely by differences over foreign policy. The Democrats, with the backing of much of the military-intelligence apparatus and the press, oppose any lessening of the confrontational posture towards Russia that was adopted during Obama’s second term and found particularly reactionary expression in Ukraine, the Syrian civil war and the NATO build-up across Eastern Europe.

While Trump employs increasingly authoritarian methods of rule, shown in the Ukraine affair but far more ominously in his attacks on democratic rights, particularly those of immigrants and refugees, the Democrats have employed the anti-Russia campaign to push for a crackdown against dissent on the internet, claiming that the social divisions in America are being created by Russian bots and trolls, not by ever-deepening economic inequality in the most unequal of the major capitalist countries.

The new stage in the political crisis opened up by the Ukraine revelations could produce new surprises. Congressional Democrats are demanding the release of the whistleblower complaint that first brought the Ukraine phone call to light, as well as a transcript of the call. Trump is scheduled for his first sit-down meeting with Zelensky Wednesday, on the sidelines of the United Nations General Assembly session.