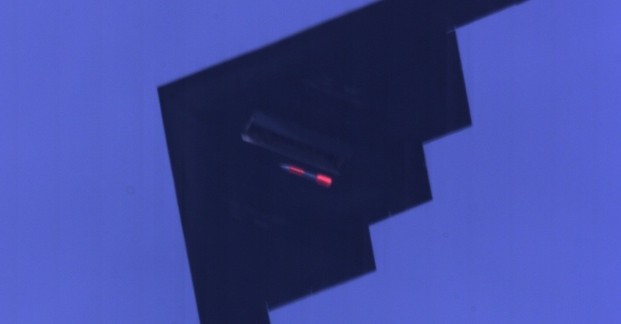 Above Photo: From defenseone.com. A B-2 stealth bomber drops an inert B61 nuclear bomb.

The tests in the Nevada desert come as tensions rise with Russia and the Pentagon seeks to replace its aging nuclear arsenal.

A pair of U.S. Air Force B-2 bombers dropped two 700-pound faux nuclear bombs in the middle of the Nevada desert within the past few days. Now the Pentagon wants to tell you about it.

Conducted “earlier this month,” according to an Oct. 6 press release, the test involved two dummy variants of the B61, a nuclear bomb that has been in the U.S. arsenal since the 1960s. One was an “earth penetrator” made to strike underground targets, the other a tactical version of the B61. Neither carried an actual warhead.

“The primary objective of flight testing is to obtain reliability, accuracy, and performance data under operationally representative conditions,” said the statement from the National Nuclear Security Administration, the Energy Department arm that oversees such tests. “Such testing is part of the qualification process of current alterations and life extension programs for weapon systems.”

But why now? Perhaps it has to do with tensions with Russia, which are higher than they have been in decades, and which have sparked fears of a new nuclear arms race. Earlier this week, the Russian government announced it would conduct a massive drill to prepare its citizens for nuclear war.

But it may also have to do with the Pentagon’s quest to replace its decades-old nuclear arsenal with new bombs and delivery vehicles, an endeavor whose price tag tops several hundred billion dollars. The Air Force, for one, has been making its case for new intercontinental ballistic missiles and a nuclear cruise missile. At an Air Force Association conference in the Washington suburbs last, Boeing touted its work on the Minuteman III ICBM, mounting large-scale models of the long-range missiles front and center in its sprawling display area.

“[We] are used to sustaining the [current] systems in pieces,” said Larry Shafer, a Boeing executive working on the company’s work to build a new ICBM to replace the Minuteman III. “This is a unique opportunity to build an ICBM system as a whole.”

There has been much debate over building new ICBMs, a project the Air Force calls the Ground-Based Strategic Deterrent. Former Defense Secretary William Perry has argued that it is unnecessary. The cruise missile project, called the Long-Range Standoff weapon, has also been called redundant to the improved version the B61 set to enter service in the 2020s.

The Air Force put out a notice in August that it is soliciting bids from companies to build new ICBMs and a nuclear cruise missiles. At the time, Maj. Gen. Scott Jansson, commander of the Air Force Nuclear Weapons Center and Air Force program executive officer for strategic systems, called the Long-Range Standoff weapon “a critical element of the United States’ nuclear deterrence strategy.”

Last year, the Air Force inked a deal with Northrop Grumman to build a new long-range, stealth bomber — recently named the B-21 Raider — that will eventually be equipped to carry nuclear weapons. At the same time, the Navy is preparing to buy 12 newColumbia-Class submarines that will replace the Ohio-Class, which can launch nuclear missiles.

The total price tag for the all of the new nuclear weapons is projected to cost between $350 billion to $450 billion over the next two decades.